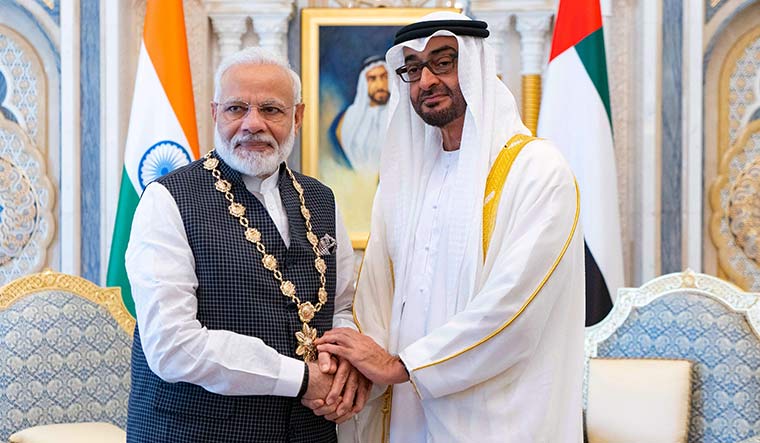 It has been a week of damage control for the ministry of external affairs after social media posts blaming Muslims for the spread of Covid-19 in India snowballed into a major diplomatic crisis. Princess Hend Al Qassimi, a member of the Sharjah royal family, was the first to criticise an offensive tweet by an Indian national and come out publicly against “Islamophobia” in India as it battles the Covid-19 pandemic. The unprecedented step forced the Narendra Modi government to initiate urgent measures to defuse the crisis.

Maintaining cordial ties with West Asian countries, especially the Gulf monarchies, notwithstanding the BJP’s hardline hindutva image has been a key achievement of the Modi government. So, the prime minister—who was awarded the Order of Zayed, UAE’s highest civilian award, only eight months ago—appears keen to resolve the crisis at the earliest. Modi wrote on LinkedIn that Covid-19 did not see race, religion, colour, caste, creed, language or border before striking. “Our response and conduct thereafter should attach primacy to unity and brotherhood. We are in this together,” he wrote.

Indian ambassadors in the Gulf countries have been deployed to tackle the backlash against India. Pavan Kapoor, India’s envoy to the UAE, tweeted, “India and the UAE share the value of non-discrimination on any grounds. Discrimination is against our moral fabric and the rule of law. Indian nationals in the UAE should always remember this.” External Affairs Minister S. Jaishankar reached out to his counterparts in Saudi Arabia, the UAE, Qatar and Oman. Minorities Affairs Minister Mukhtar Abbas Naqvi, who usually keeps a low profile, has reportedly been instructed to speak out. The damage may have been repaired for now, but India’s domestic politics is likely to cause further tension in its ties with the Gulf states.

“What we are seeing with the UAE is an indication of how India’s policies and communal messaging at home can have real and deleterious impact on its relations abroad,’’ said Michael Kugelman, senior associate at Wilson Center, Washington, DC. “It is a similar pattern we have seen with Bangladesh, an important country the Modi government has prioritised in its foreign relations, but one that has reacted unhappily to what India is doing at home.”

Threats against Mazhar Farooqui, features editor of the Dubai-based Gulf News, have added to an already explosive situation. “I found that many people who were asking for my passport to be revoked and talking about my daughters were followers of the prime minister,’’ said Farooqui.

“Modi has invested a lot in the region,” said Harsh Pant, director, strategic studies, Observer Research Foundation. “He has got significant returns. To disrupt that would not be in his interest.” According to reports, six Indians in the Gulf have recently lost their jobs because of social media posts. “The UAE is historically very uncomfortable with any kind of religious extremism, including support to the Muslim Brotherhood,’’ said writer and cultural critic Shajahan Madampat, who lives in the UAE. “They are now beginning to realise that hindutva is the Hindu version of the Muslim Brotherhood.’’ Madampat, however, said India’s ties with the UAE would remain strong.

The influence of the sangh among NRIs in the Gulf is growing. A fake video allegedly showing the crown prince of Abu Dhabi chanting Hindu hymns at a public function went viral soon after Modi’s trip to the UAE in February 2018. The video, which was telecast by a few Indian news channels, was formally denounced by the UAE government and it hurt India’s image. Recently, a tweet made by BJP’s young MP Tejasvi Surya in 2015 denigrating Arab women resurfaced mysteriously, further vitiating the atmosphere. Equally damaging was a fake tweet by an Omani princess warning about the expulsion of Indian workers from Oman.

Anil Wadhwa, distinguished fellow at the Vivekananda International Foundation, said the social media campaign was a well-orchestrated move by Pakistan. “They have also activated the Organisation of Islamic Cooperation.” Sohan Roy, a UAE-based NRI businessman, too, expressed suspicion that Pakistan could be behind the present crisis. “Someone is deliberately blowing up the issue. This will never happen otherwise,” said Roy, who recently courted controversy after the visuals used with a short poem he wrote hurt religious sentiments of Muslims. “If the government conducts an inquiry, the truth will come out.”

While it is easy to put the blame on Pakistan, the ongoing crisis has exposed a disturbing trend that is on the rise in India. Recently, 101 former civil servants and diplomats like Shivshankar Menon and Shyam Saran wrote to chief ministers and lieutenant governors, expressing anguish over the “harassment” of Muslims in some parts of the country. They highlighted the “othering” faced by Muslims, especially after the Tablighi Jamaat event in Delhi.

The UAE alone is home to nearly 33 lakh Indians. “There are a number of people, especially blue-collar workers, who have lost their jobs,” said Wadhwa. And, they seem to have overstayed their welcome. The Gulf region is India’s biggest source of overseas remittances and a key factor in the country’s energy security policy. With the Covid-19 crisis, the world is headed for a recession. Any misunderstanding with the Gulf countries during this period will be disastrous. India, therefore, needs to ensure that its ties with the region remain robust.