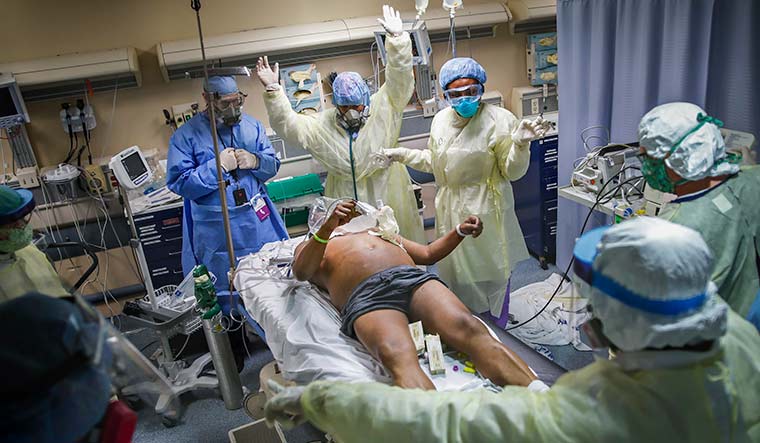 A few months ago, Covid-19 was a distant threat for the United States, but the country now leads the world in terms of deaths and live infections, with New York City being the epicentre of the pandemic. The once glittering ‘centre of the universe’ is now largely deserted, with the silence broken only by ambulance sirens. As of April 29, the US has recorded 59,266 deaths, with the state of New York reporting 23,144 deaths.

Most Americans remain locked down, listening to the conflicting and worrisome news coming out of the Trump White House and wondering what’s next. Dr Anthony Fauci, director of the National Institute of Allergy and Infectious Diseases, has been the voice of calm and reason as Americans embrace social distancing and masks, and adopt a new normal for quarantined school and work.

Indian Americans are a prominent presence in the tri-state area comprising New York, New Jersey and Connecticut. Many members of the community have been affected by the pandemic and some, like the well-loved chef Floyd Cardoz, have lost their lives. But members of the community, including physicians, nurses and health care workers and a large number of essential workers employed in restaurants, grocery stores and small businesses, are also active in the fight back against Covid-19. Seema Verma, who heads the Center for Medicare and Medicaid Services, is a member of President Donald Trump’s task force to tackle the pandemic. Other prominent Indian Americans engaged in the endeavour include former US surgeon general Dr Vivek Murthy, Dr Kavita Patel of Brookings Institution, Dr Ashish Jha of Harvard Global Health Institute, Dr Rahul Sharma of Weill Cornell Medicine, Dr Nirav Shah of Maine Center for Disease Control and Prevention and Dr Monica Bharel, commissioner of the Massachusetts department of public health.

New York’s hospitals are Covid-19 hotspots as doctors try to save as many people as possible despite the constraints of space, personal protective equipment (PPE) and ventilators. One of the fierce battlegrounds is Mount Sinai Hospital which has several branches in Manhattan and Queens, and has dealt with hundreds of cases. “There is usually a variety of intensity within any intensive care unit, but here everyone is equally super sick. So there is no variation, no downtime, there is no easy patient,” said Dr Umesh Gidwani, chief of cardiac critical care at Mount Sinai. Dr Roopa Kohli-Seth, director of critical care at Mount Sinai, said the Institute for Critical Care Medicine had dedicated all seven ICUs and 45 physicians to treat Covid-19 patients.

A week ago, when the infections were at the peak of the curve, there was a nightmarish lack of hospital beds, ventilators and PPE, and cities and states were hustling to get their act together. In New York, tourist spots such as Central Park and business arenas like the Javits convention centre were turned into hospitals to solve the shortage. The federal government even sent in the USNS Comfort, a navy ship, to serve as a mobile hospital.

The delay in testing, coupled with the lack of equipment and adequate staff, has been the bane of many hospitals, not only in New York, but also in neighbouring states. “Our government failed us—it has repeatedly misinformed the public, it dawdled instead of manufacturing enough test kits, it has persistently failed to procure PPE for essential workers,” said Dr Sejal Hathi, resident physician in the intensive care unit at Massachusetts General Hospital in Boston. “Doctors and nurses were not prepared for it. But community by community, one by one, we are picking up the pieces and working together to confront the challenge ourselves.” 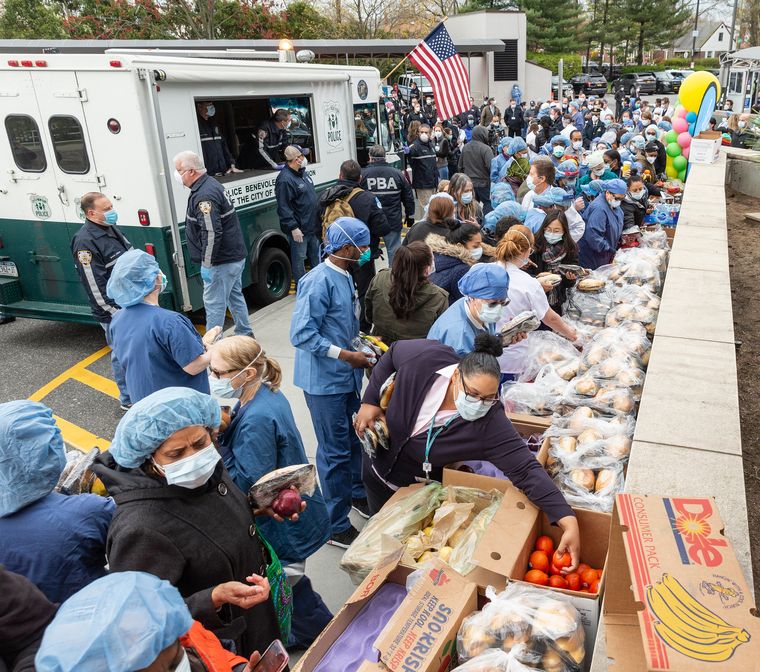 One Indian American doctor who is making virtual house calls during this difficult time is Dr Sanjay Gupta, surgeon and journalist who conducts ‘coronavirus town halls’ on CNN with Anderson Cooper, helping house-bound populations to stay informed and calm. Health care workers are certainly proving to be the heroes of the hour. Dr Omar Manya, an emergency room doctor at Elmhurst General Hospital in New York, survived the virus and returned to confront it. “There is just so much need out there and such a shortage of supplies and people in the workforce that we are excited to get back on the frontlines,” he said.

Essential workers driving buses and handling groceries, too, have been infected and some have lost their lives. The Empire State Building in New York was lit up in red and six Swaminarayan temples from Atlanta to New Jersey were lit up in blue to thank them. The Swaminarayan organisation also donated thousands of N95 masks. Sikh gurdwaras and NGOs have been donating meals to health workers and those who lost their jobs. Restaurants, themselves out of business, are paying tribute to selfless first responders by providing meals to hospitals. Every evening at 7, New Yorkers gather at their windows and doors to clap and sound a grateful thank you through trumpets and bells. It is spontaneous, with the honking of car horns and applause from skyscrapers—a moment of goodness, joy and gratitude.

For most people, life during the pandemic means adjusting their lifestyles and their expectations. Children and young adults are back home, trying to pursue their studies from their bedrooms with online learning; parents are trying to run businesses from their home computers. Life is on hold, but a new lifestyle may develop from this, as arts, leisure and social activities are reborn on online platforms.

As Covid-19 continues to ravage nations around the world, the loss is not only in human life, but also in the very basics of health, food and livelihood. According to a Pew Research Center survey, 43 per cent of Americans have reported that someone in their household has lost a job or has taken a pay cut. Among the lower income groups, the figure is 52 per cent. 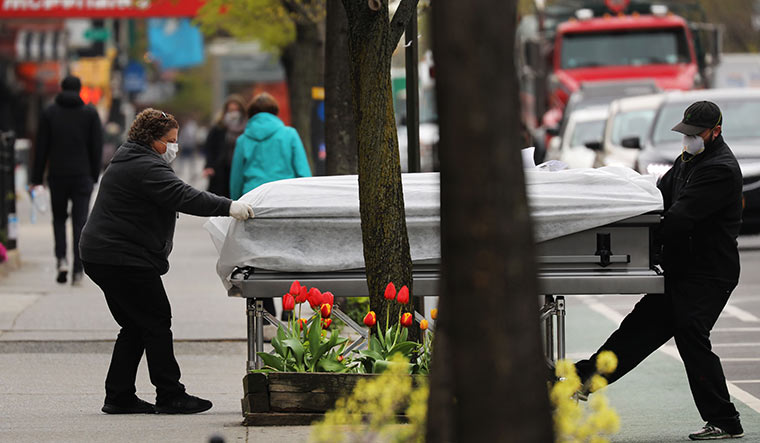 Last journey: A casket is delivered to a funeral home in Brooklyn in New York City | AFP

Indians in the hospitality industry have been particularly hit, especially the hotel and motel industry which was behind so many Indian success stories. “America’s hotel owners were the first ones to feel the economic impact of Covid-19 as meetings and events were cancelled, and they will likely be the last to recover as travel restrictions are lifted and economic recovery begins,” said Cecil P. Staton, president and CEO of Asian American Hotel Owners Association. “We are, however, gravely concerned whether many hotels can survive until we reach that point.”

Restaurants and bars, once the joy of city life, are shuttered and Indian restaurants, too, have seen a complete shutdown except for contact-less deliveries. Some of the players like chef Chintan Pandya and owner Rony Mazumdar of Adda and Rahi, and Surbhi Sahni of Tagmo are cooking up meals and working with city agencies and NGOs to provide food to the hungry and the jobless. In New York, thousands of restaurants, owners, chefs, kitchen staff and delivery people are all concerned about the future. The danger is that many of these restaurants may never be opened again.

While Americans wait for the federal government’s stimulus package to get their lives restarted, Indian American NGOs are trying to help alleviate the situation in the US and also in India. A group of Indian American entrepreneurs brought together by Indiaspora, a Washington, DC-based community organisation, has raised $1 million for food security in both India and the US in an initiative called ChaloGive for Covid-19. M.R. Rangaswami, founder of Indiaspora, said the funds were being directed to two credible organisations—Feeding America in the US and Goonj in India. NGOs like Share and Care, Children’s Hope India and Sewa International are delivering meals to needy New Yorkers. Sudha Acharya, director of the South Asian Council for Social Services, is delivering Indian meals to the elderly, the needy and the undocumented in the hard-hit borough of Queens.

With the US economy in a tailspin, negotiations between the White House and the Congress on the next stimulus package are expected to begin soon. The White House is likely to seek a “liability shield”to protect businesses from being sued by customers who catch the virus. Many companies are reluctant to reopen while the virus still spreads, for fear of being held liable.

As people and small businesses wait for more help from the federal government, there is concern that they may suffer as big corporations make a grab for the available funds. Bharat Ramamurti is an Indian American who will have a say on the issue. He has been appointed to the Congressional Oversight Commission which will oversee the $2 trillion fund to restart the economy. Announcing his appointment, Senator Chuck Schumer said Ramamurti would fight for transparency and would hold bad actors accountable.

While some states are looking to ease the lockdown, many others are yet to hit the peak of the infection curve. New York, which has seen the worst, seems to have survived under the watch of Governor Andrew Cuomo. In New York City, Mayor Bill de Blasio’s administration has provided free meals for anyone who needs to eat, with no questions asked about their status or income. The homeless and the ones who are recovering from the infection and cannot be quarantined at home have been housed in city hotels with all costs paid. Children who are from vulnerable homes and do not have access to online devices for home-schooling have been provided with iPads and Wi-Fi. However, until millions of tests are done, opening of the economy seems impossible and the city remains fragile.

“Testing is going to be a major operation that happens from now until the situation is over,” said Cuomo. “It’s new, it’s technical, it’s complex. It’s a political football. But testing does a number of things for us. Number one, it reduces the spread of the virus by finding people who are positive, tracing their contacts and isolating them. That’s a function of testing.”

While most states are observing quarantine, some states like Georgia are tentatively reopening, although they have not yet reached the peak of the infection. Trump has asked governors to make the decision, so there is no unified national policy. New York plans to reopen in phases, based on more testing. Cuomo said reopening of parts of upstate New York could happen after May 15.

There is, however, fear that the virus may return in a second wave in the fall. Cuomo has suggested that it is important to plan for a better health care system, a smarter telemedicine programme, better technology and education and importantly, more social equality for minority communities. The pandemic has hit low income groups and minorities harder and Trump’s new immigration ban has added more problems for them.

“You can see the disparate effect of this disease and how it reinforced the disparity and inequity in society,” said Coumo. “So it’s not just reopen, it’s not just build it back. It’s advance. Use this as a moment in time where they look back when they write the history books and they say, ‘Boy, they went through a terrible time, but they actually learned from it and they improved from it and they moved forward.’”