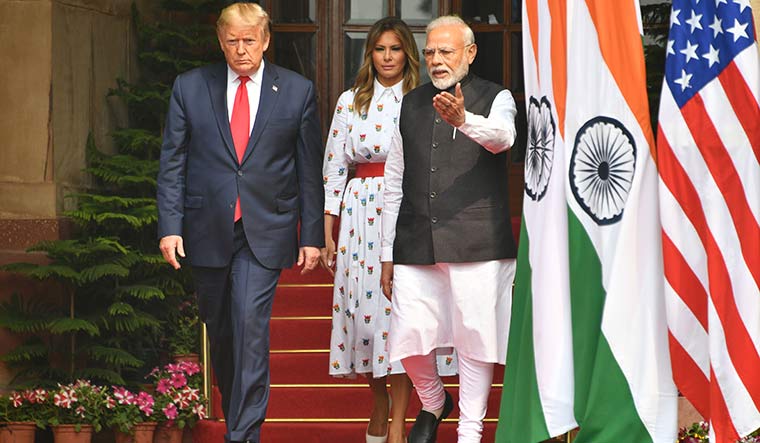 US President Donald Trump used the four letter word several times in India—love. The presidential visit was a two-day “incredible’’ love affair for everyone involved, from Prime Minister Narendra Modi to the 1.25 lakh people at the Motera stadium in Ahmedabad and the thousands who lined up the streets to watch the Trump-Modi motorcade pass by.

This is, however, a romance between two businessmen who acknowledge each other’s acumen. “Modi is a tough negotiator,’’ was Trump’s unabashed compliment to his “good friend’’. So, while the much awaited Trump visit was a gush fest of commitments and declarations—like elevating the bilateral relationship to a Comprehensive Global Strategic Partnership—in terms of deliverables, there was nothing much. The actuals can be summed up as three memoranda of understanding (on mental health, on the safety of medical products and a letter of cooperation between the Indian Oil Corporation and ExxonMobil), the sealing of a pre-concluded $3 billion deal to buy Apache and MH-60 Romeo choppers and an agreement to begin negotiations for a comprehensive trade deal.

The trade deal was not the focus of the visit. Even before the wheels of Air Force One were up at Joint Base Andrews, Trump made it clear that he was not going to sign a trade deal. He, however, was very articulate about his other expectation—of an overwhelming welcome. India upped its athithi devo bhava (guest as God) credo, and Trump was impressed that he had received the “greatest greeting given to any head of state’’.

Trump likes reciprocity, in trade and otherwise. He wanted the Indian version of ‘Howdy, Modi!’, and ‘Namaste Trump’ was just that. As Indian Ambassador to the US Taranjit Singh Sandhu said, “From the US perspective, there was a very significant messaging with the reception Trump got. It showed that at the people-to-people level, there was a great deal of warmth and affection.’’ In fact, at the Rashtrapati Bhavan banquet, Trump spoke about how comfortable he was in India and even wondered whether he could contest elections here.

This visit was the first standalone tour to India by any US president, which is significant in itself. With Trump making it a family affair, including daughter Ivanka Trump and son-in-law Jared Kushner in the delegation, along with First Lady Melania, he was not just acknowledging a business relationship, but a personal one, too. Mutual admiration was on full display. Modi termed India-US relations as the most important partnership of the 21st century, and Trump returned the compliment by saying his visit was diplomacy of great friendship and respect. 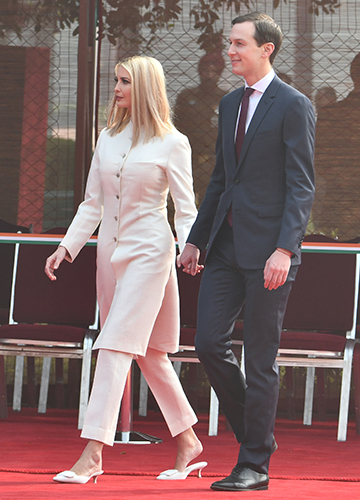 The visit was also a platform to showcase the trajectory bilateral ties have taken in the last four years. Uncle Sam is now a leading defence supplier and a key partner in defence manufacturing. “The two countries are part of each other’s supply chains,’’ said Modi. India has already done two important treaties, COMCASA (Communications Capability and Security Agreement) and LEMOA (Logistics Exchange Memorandum of Agreement), which the US does to facilitate interoperability of militaries and sale of high-end technology. The third, BECA (Basic Exchange and Cooperation Agreement), is in the works.

“The strategic and military components in the bilateral have grown significantly,’’ said retired diplomat Vishnu Prakash. “The mention of a free and open Indo-Pacific is significant, just like the explicit mention of fighting radicalised Islamic terror.’’

The energy partnership has got a big fillip in recent years. With India stopping its crude imports from Iran under US pressure, American crude and gas supplies have zoomed. Energy exports, as Trump boasted, have grown by 500 per cent on his watch. Trump’s visit, at one level, was a public nod of India toeing the US line on Iran. The future looks even more American, with the US now targeting Venezuela, another crude exporter to India. Establishing a permanent office of the US International Development Finance Corporation with a $600 million financing facility for renewable energy projects in India was a takeaway.

Counterterrorism and Pakistan came up for a long conversation. This is one area where Trump and Modi have different views. The US backed India at international fora to put pressure on Pakistan and the joint statement reflects this resolve, calling on Pakistan to ensure that no territory under its control is used to launch terrorist attacks, and to “expeditiously bring to justice’’ the perpetrators of 26/11 and Pathankot attacks.

But Trump was open about his good relationship with Pakistan. “Thanks to these efforts, we are beginning to see signs of a big change with Pakistan,’’ said Trump. He made it clear that India had a leading role in promoting peace in the region, hinting towards an American nudge to reduce tensions. Much before Trump publicly batted for Pakistan Prime Minister Imran Khan and suggested that “there are two sides to every story’’ while referring to Kashmir, Alice Wells, principal deputy assistant secretary for South and Central Asia, had welcomed Pakistani wrestlers competing in India, noting that sports could be an effective tool to build bridges.

Trump’s support for Pakistan has to be viewed in the light of the US-Taliban deal expected to be inked this week. Despite India’s obvious discomfort with the Taliban, Foreign Secretary Harsh Vardhan Shringla said India and the US shared an interest in Afghanistan and India was watching the developments carefully.

The elephant in the room was not the K-word, but the T one. Teams Trump and Modi continued the shadow dance over the “big trade deal’’. While Trump described India as tariff king and demanded reciprocity, Modi has thrown his weight behind the deal. From April to December 2019, “convergence had been reached on many issues,’’ claimed an Indian official. The twin issues of dairy and medical devices were resolved at the Indian end and it was at the American side that newer points popped up. India, which is still smarting from the revocation of the Generalised System of Preferences, is wary of inking something in a hurry that it may regret a decade later. The dairy settlement—if it happens—will be significant, given that it stood in the way of India inking the Regional Comprehensive Economic Partnership (RCEP). Significantly, US Commerce Secretary Wilbur Ross flew from India to Pakistan to negotiate closer economic cooperation.

For Trump, India’s friendship is important on various counts: as a counter to China, in the Indo-Pacific partnership and also to impress the Modi-loving Indian diaspora in an election year. Thus, he was measured in his language and even admitted that he did not want to utter anything which would “blow up the two days’’. So while he acknowledged that a part of Delhi was burning even as he was on a visit, he refused to be drawn into any commentary on religious liberties. On the Citizenship (Amendment) Act, which is the catalyst of much of the unrest in India and is criticised even by the US Congress, Trump merely said, “I leave it to India. They will make the right decision.’’ When asked about religious intolerance in India, Trump responded with figures his friend Modi had provided him. He said the Muslim population in India was 200 million, and that it was 40 million only a short while ago.

If that was not music to Modi’s ears, Trump turned poetic about cooperation in space and said, “We will be partners on our voyage into the stars.’’