Spectre of a crown

China is still grappling with coronavirus that has claimed more than 1,000 lives 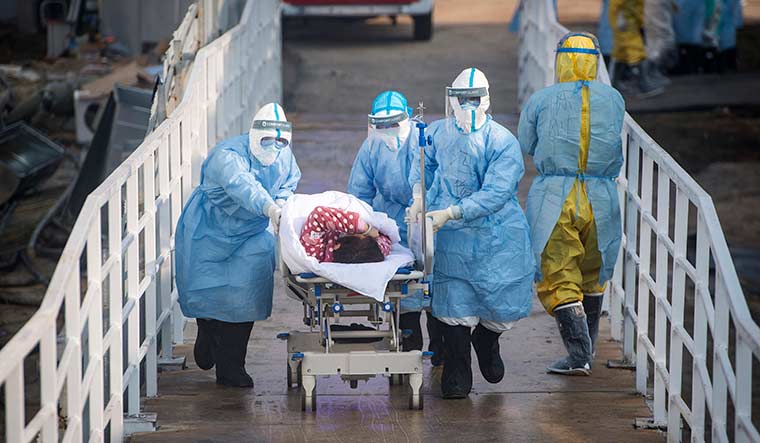 On the frontline: Medical workers in protective suits transfer the first group of patients into the newly completed Huoshenshan temporary field hospital in Wuhan | AP

AN AIR HUG—that is all Liu Haiyan, a nurse treating novel coronavirus patients in Henan province in China, could give her young daughter when she came to drop off dumplings at the hospital. Both of them wore the mandatory masks and avoided contact, standing at a distance from each other. The daughter, amid sobs, told Haiyan that she missed her a lot. “Mum is fighting monsters,” replied Haiyan. “I will be back home once the virus is beaten. Be good.” A video of their conversation went viral, as did another one of a mother breaking down while visiting her doctor-son who had quarantined himself. She, too, had brought him food.

Medical professionals in China have been on the frontline of the country’s battle against a virus that has claimed more than 1,000 lives and infected more than 42,000 people since December 2019. The World Health Organization formally named the disease Covid-19, short for coronavirus disease 2019. The virus continues to be called 2019-nCoV, short for 2019 novel coronavirus. China, no doubt, is on a war-footing. But there is a fear that the number of cases is yet to peak because of the extreme cold in different parts of China, and that after Wuhan, the epicentre of the outbreak, it could spell doom for 17 cities including Beijing and Shanghai. “The virus will spread even after a month,” a Chinese government spokesman from Beijing told THE WEEK. “It is getting worse day by day.” But Dr Zhong Nanshan, who was lauded for his work during the SARS epidemic in 2003, reportedly said that the cases could peak by mid or late February and then plateau before easing.

While President Xi Jinping is yet to visit Wuhan, capital of Hubei province, he chaired two meetings of the central committee and the politburo standing committee of the ruling Communist Party of China in 10 days, unprecedented in recent times, and warned citizens to adhere to the government’s instruction or face “stern punishment”. He also held a videoconference with the hospital staff at Wuhan. Anti-corruption units, too, have been asked to monitor everyone’s activity, even on social media.

“I think the way the chief (Jinping) is leading is simply phenomenal,” said Li Huan, an academician in Hong Kong. “He is doing more than what was expected from him. He is personally monitoring the situation on the ground and using drastic measures to lower casualties. These measures were missing during the SARS outbreak.”

Jinping has put vice premier Sun Chunlan in charge of the operations in Hubei province. And heads have rolled since the outbreak. “The vice executive president of the Red Cross Society of Hubei province along with more than one and a half dozen magistrate or deputy director-general level officials throughout the country have been sacked,” Li Xiaojun, information director of the state council—the highest administrative body of the People’s Republic of China—told THE WEEK.

While China has been able to narrow down the origin of the virus (2019-nCoV) to bats, a senior state council official told THE WEEK that there was a secondary carrier that is still unknown. Reports suggest that it could be pangolins. 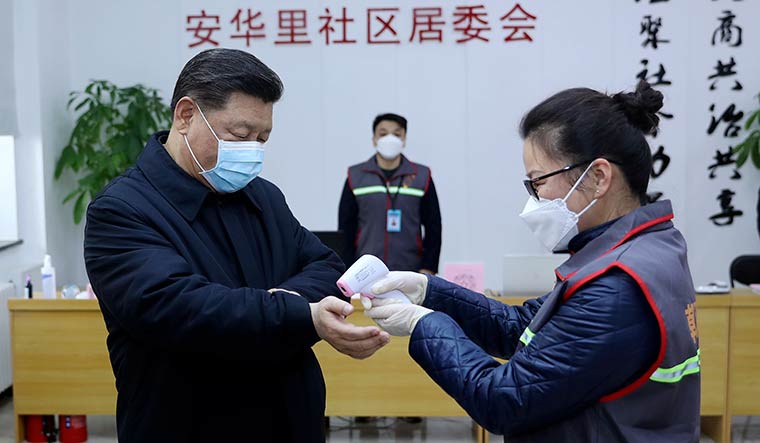 By the rules: President Xi Jinping gets his temperature checked during a visit to a community health centre in Beijing | AP

The virus struck during the Chinese New Year, when five million people from Wuhan, the education and IT hub of China, reportedly travelled to other parts of the country and abroad. “Of them, one million are university students,” said Xiaojun. “Local gymnasiums, sports centres, schools and exhibition centres were equipped with hospital facilities within a few days.” David Chang, member of the National Commission of Science and Technology, Shanghai, however, said that it was a wrong notion that only Wuhan was affected. “Entire China is grappling with it. There is no room for containment. We are worried,” he said.

There has been criticism over the way China has dealt with the outbreak, right from the initial lackadaisical attitude of the Wuhan administration to the reluctance in sharing the extent of the outbreak. The government thought that the outbreak would not be deadly as most Chinese were vaccinated against SARS. China reportedly faced a shortage of the rapid nucleic acid test kits to detect 2019-nCoV, nor did it have enough N95 masks to prevent its spread. China looked to the US for help, “but the US turned a blind eye to our cause,” said Xiaojun. “They only paid lip service.” Japan finally came to China’s rescue and supplied the masks. Many of the early victims died even before being tested owing to the lack of kits. All cases then were branded as coronavirus cases, said an official, hence the reluctance in sharing casualty figures. The new kits, which take just hours to confirm a case, are still not readily available, and therefore hospitals, at times, have to rely on the old ones that take three weeks for confirmation.

While the WHO said that the first vaccine could be ready in 18 months, US firms in China came up with a solution—Remdesivir, an antiviral drug that was used to treat Ebola patients. “On February 3 and 4, we administered it to 270 patients, which proved to be very effective,” Xiaojun told THE WEEK. “Ebola medicine companies and some US companies in China have given us the much-needed help.”

The Chinese government also faced flak for ignoring the initial warning given by eight doctors about the “return of SARS” with a different genetic character. One among them was ophthalmologist Li Wenliang, who eventually died of Covid-19. He had said that the initial course of treatment that was followed would not work against the new virus.

The Wuhan administration, instead of heeding to the warning, accused the doctors of rumour mongering. “We cannot blame the local police because Dr Li [Wenliang] called the secret disease SARS at the time. It was treated as a rumour because he was an eye doctor and not a respiratory doctor,” said an exclusive statement from the state council to THE WEEK.

Wenliang’s death raised international concerns about China’s handling of the epidemic. Countries in the west alleged that the actual number of deaths was three times higher than the official figures. The US alleged that China’s major crackdown on social media and hiding the actual death toll and number of those infected was making things difficult for other nations. Xiaojun, however, told THE WEEK, “China does not restrict social media. It only punishes those spreading rumours, violating the epidemic prevention law. The government uses social media to promote transparency, raise awareness of the problem and get good advice in the fight against the virus. However, we admit amid this there was the case where eight doctors were warned.”

There is unequivocal condemnation of the US response in China and even Hong Kong, which recently fought Chinese ‘high-handedness’. Jonson Choi, CEO of a Hong Kong-based communication firm, said, “Some Americans are so delighted to see China suffer—so short-sighted and racist. The impact of the coronavirus pandemic is beginning to affect the US oil and energy industry. Just a few days after the outbreak, daily oil demand in China went down by 20 per cent because of dwindling air travel, road transportation and manufacturing. Since China consumes 13 of every 100 barrels of oil the world produces, every oil company is being hit.”

However, there are those like Sally J. Yan, strategic adviser on Europe-China trade, who oppose such criticism of the US. “Last week, I oversaw the Chinese government’s purchase of over 40,000 protective suits from 3M (a US company) factories in Italy,” said Zurich-based Yan. “Throughout the whole process, no one from the government or the business procurement team was concerned of the US brand.”

More than 50 million people are estimated to have been affected by the lockdown in Hubei province. Other major cities, including Beijing, have turned into ghost towns, what with companies and establishments staying shut. Even cash transactions are being shunned for the fear of currency notes spreading the virus. The government has unveiled new tax policies to help industries hit by the epidemic.

The government’s priority, however, is to locate the five million Wuhan residents who travelled out of the city. China has developed a mobile app called ‘Close Contact Detector’ that enables people to check whether they were in close contact with someone infected with 2019-nCoV.

Though China has not approached any country for help, Xiaojun said a few African countries donated money and materials. “We are deeply impressed by that,” he said. “Usually your poorest relatives are the most likely to give you help although they do not have much to offer.”

Prime Minister Narendra Modi wrote to Jinping offering assistance—a gesture that was appreciated by China. India, with three confirmed cases of Covid-19 in Kerala, is also on alert. Tourism has suffered after cases were confirmed in 24 countries outside China, including Singapore, Malaysia, Vietnam and Philippines (one casualty). With one case detected in Tibet, Indians are cancelling trips to states along the Indo-Tibetan border. Said Sudip Bose, a travel company owner in Kolkata, “We have seen a drastic drop in footfalls in Darjeeling and Sikkim, and also in bookings to Arunachal Pradesh and other northeastern states this year. The demand usually peaks in February.”