As Day Zero approaches, Cape Town has neither enough water nor time 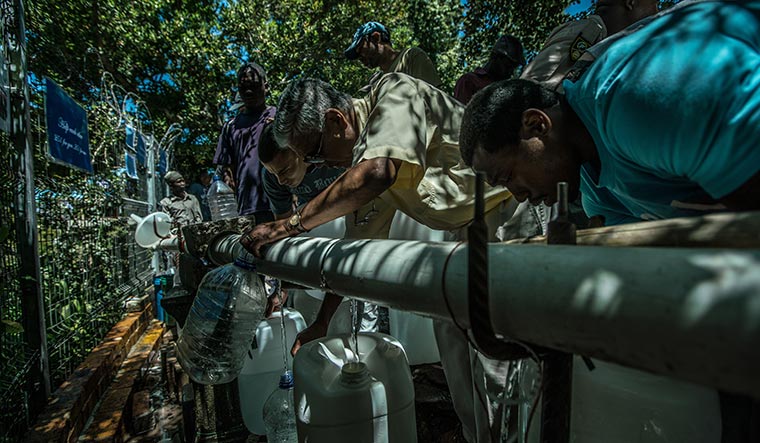 The deadline closes in: Cape Town residents queue up to refill water bottles at Newlands Spring. Diminishing water supplies may lead to the taps being turned off on April 16 | Getty Images

As I walk towards the supermarket doors, people stream out, trolleys piled high with five-litre plastic bottles of water—and, fear grips. Am I too late?

Reality check: I have not come to buy water. I do not need to buy water. I have about 20 bottles of carefully collected run-off from air-conditioners. But, that is the nature of group panic.

In Cape Town, we all live in mortal fear of Day Zero, when water will be finally cut, and we will be forced to stand in queue, for the meagre daily allowance at collection points across the city. As we wait for the axe to fall, anxiety spirals amid reports that shops are running dry, and how the unscrupulous are buying more than what is allowed, leaving little or nothing for late-comers.

It is a middle-class mania, and it is a new normal, when living in a city stricken by drought, where water is pretty much the only subject—on social media, where people fight one another in queues at natural springs, where clever entrepreneurs make money from door-to-door deliveries, and where there is no mercy for anyone caught watering their lawns.

If one lives in a township, or in a rural part of South Africa, one is bound to know the value of this fast-disappearing liquid gold. The odds are you are no stranger to queuing up for water, or to lugging heavy buckets back home from nearby rivers.

But, the people I am talking about here have, like me, been flushing this precious resource down the toilet for decades. What a wake-up call it has been.

Looking to the heavens for rain—literally and figuratively—is not going to help, even though praying for rain in South Africa, is very popular. Just this weekend, despite predictions of rain on Saturday from our specialist weather forecasters, an evangelist went out to lead thousands of people in prayer, to claim victory when the skies opened.

Call me a cynic, but we have run out of time. We cannot spare a moment for the propagandists or the crusaders. We need science-based interventions, combined with permanent change from all the people. We live in a new, waterless world now. In mine, flushing the toilet like my mother trained me to, does not happen, unless it is essential, and then I use the leftover shower water to do so. Wherever you go, to public toilets or those in the homes of friends, do not expect a clean bowl.

Gross? Definitely not. It has become a badge of honour.

I boil the air conditioner run-off and use it for cooking, drinking and to keep alive the last remaining greenery still fighting for survival in the garden. Friends share water-saving tips, and there is a definite feel-good warmth when you see the innovations. At one friend’s home, there are two-litre Coke bottles filled with water beside every basin. A gentle squeeze of the bottle with a strategically placed straw on the side, releases just enough water to wash hands, without wasting a drop.

Capetonians have realised that running the washing machine on two rinse cycles rather than the wash and rinse option saves an inordinate amount of water—using only 25 litres against the usual 50 to 60 litres—an entire day’s allocation. Changes like these in the 2.03 lakh Cape Town households, have brought down their monthly water consumption to less than 6,000 litres at the last count.

A green dot on Cape Town’s city water map is considered an achievement. All residential properties using less than 10,500 litres a month get a green dot—light green for consumption between 6,000 and 10,500 litres, and dark green for those who are top of the class. A click on the houses will give you information about who is dropping the ball.

It still remains to be seen how, and to what extent, expeditious reactions like tapping into aquifers will impact the ecosystem. The same applies to the long-term potential marine environmental impact of desalination. And, what about all that plastic, thanks to the bottled water, and other containers?

There has been plenty of talk that Day Zero is just a myth and that it was created because people paid little heed to gentler warnings. Whether there is any truth in that or not, it got Capetonians to join forces and contribute to a common public good, and reduce water consumption by 57 per cent.

However, this water crisis has not all been about mutual support and hand-holding. It turns ugly, especially at the natural springs, where the queues test the mettle of the usually well-behaved suburbanites. There have been plenty of reports of pushing, shoving and name-calling, with those there to fill their five-litre bottles unimpressed by others who turn the shortage into a lucrative business opportunity. They are the ones who spend lengthy periods filling containers, to deliver to homes across the city at a substantial cost. There are those who have imported containers perfect for standing in while you take that 60-second shower. The big question into the future is whether these changes will be permanent, or, whether the efforts, like most responses driven by fear, lapse once the apparent threat is over.

For the Western Cape, the tough truth is that the threat will never be over. For the past three years, rainfall has been well below average. No matter how politicians spin the Day Zero bogeyman to win (or lose) votes ahead of next year’s general election, it is better to believe the hard evidence—like those overhead images of the Theewaterskloof Dam, which can hardly be called a dam anymore, in any real sense of the word. Cape Town is in trouble, and climate change is here to stay.

It may not be comfortable to haul buckets to flush loos; give up on that most-loved kitchen appliance—the dishwasher; or swap rolling green lawns for more eco-friendly alternatives. But, water conservation has to become part of everyday reality, because the rains are not coming to save us.

The time for change is not now. It has come and gone already.