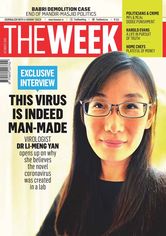 China is to be blamed

Virologist Li-Meng Yan has to be taken seriously. We cannot simply dismiss her allegations, and rule out the lab-escape theory (‘Made in China’, October 11).

There is no smoke without fire. It is a fact that China never took Covid-19 seriously, and the world at large is paying a price for China’s sins.

Also, the World Health Organization has lost face over its handling of the pandemic. It did not criticise China the way it should have in the initial months. Once Covid-19 disappears fully from the world, the onus will be on China to prove to the world as to why it was not wrong in its handling of the virus during the last few months of 2019.

Having said that, all countries must be utmost vigilant to prevent accidental leaks of dangerous viruses from labs.

We cannot completely rule out the possibility that Covid-19 came from a lab in China. That no person in China is allowed to know or say anything without the government’s permission smacks of dictatorial tendencies and foul play.

Let us assume for the sake of argument that it was not a lab in China from where the virus originated. But, then, why was the government of China so slow to react to the outbreak? If China was careful, we would not have seen the pandemic in the form that is now, affecting almost everyone in the world.

Dr Li-Meng Yan’s revelations were interesting and thought-provoking. There appears not an iota of doubt about her observation that the Covid 19 virus originated from a lab in China. The WHO has failed to convincingly repudiate her claim.

A security cover should be given to her, and a panel of virologists should verify all her claims.

Two stories on judiciary that appeared in your issue dated October 11 were quite interesting.

While the first one (‘Address change’) talked on the issue of addressing the court while arguing a case, the second story (‘Unsettled, unsettling’) talked on the undue delay observed in disposal of cases by courts, focussing on cases involving politicians.

It is really intriguing that in spite of clear suggestions and decisions by various courts and judges, most advocates are reluctant to change the way the courts are addressed. This is probably to satisfy the ego of the judges, or out of the fear that such a decision on their part will have an adverse reaction on the case they argue.

One only hopes the highest court in the country will put its foot down and make it mandatory for all to not use archaic terms such as ‘Lordship’ and ‘Your Honour.

As the old adage goes, justice delayed is justice denied. Justice is denied in almost all cases these days, for various reasons!

The main reason for undue delay should be attributed to the delaying tactics of advocates who ask for adjournments on flimsy grounds. It is also a pity that the judges grant such adjournments. It is high time the system itself enforced some basic discipline, restricting the number of adjournments, fixing a time limit for each stage of the case, like filing affidavit/counter affidavit, arguments, submission of briefs and verdict.

With the CBI special court acquitting all 32 accused in the Babri Masjid demolition case, the Ayodhya movement should end, all for good (‘Ripples of the ruling’ October 11).

The call by some people to “liberate” the other two temples in Kashi and Mathura is uncalled for, and the Uttar Pradesh and Union governments should never support such movements.

THE WEEK deserves a standing ovation for its cover story on Syama Prasad Mookerjee (‘The man, the melange’, October 4).

The well-crafted issue had a surprise inclusion in form of an interview of a person named Chandra Bose, whose identity in Bengal politics is below minimum.

His comments on Mookerjee gave me this impression that he is not aware that his grandfather and granduncle were keen to form a political axis with Mookerjee in the 1940 Calcutta Municipal Corporation election. But, then, the idea got scrapped because of the narrow political interest of Subhash Chandra Bose. It was pathetic that for the sake of power Bose and his elder brother secretly sided with the Muslim League.

Chandra Bose also does not know that his grandfather’s plan to form a united sovereign Bengal with Huseyn Shaheed Suhrawardy would have not gone well for Bengali Hindus.

The AIADMK is going to hit a rough patch in next year’s Tamil Nadu assembly elections, with or without V.K. Sasikala in party’s fold (‘Opposite leaves’, October 4). There is no charismatic Jayalalithaa now in the party, who can guide the party back to the treasury benches.

The column by Mani Shankar Aiyar (‘The Congress’s unique adhesive’, September 13) is a pathetic admission of the state of affairs in the grand old party of Indian politics.