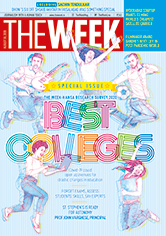 THE WEEK has been mentoring us, the readers, all the while! Therefore, it augurs well that you have come up with a special issue on best colleges of India (‘Rapid response’, August 30).

We owe you a big salute for updating us on India’s education hubs and top colleges, with the help of an authentic survey.

Further, the editor elucidated the concept and issued a clarion call to young people to be brave and have self-confidence to face any unknown bumpy road in future. Thank you.

THE WEEK continues to give me so much of information every week. The best colleges special issue, I am sure, will be useful for students, who are seeking guidance on courses that offer the best job opportunities.

It is good to note that India’s top colleges have reacted fast to the pandemic, grabbing any opportunity that came their way. More colleges should introduce innovations to elevate online education, which is new normal.

Technology has to be the backbone of future education.

Learn from the past

We cannot judge Robert Clive by today’s sensibilities. What he did was totally acceptable norm of that era (‘Thug of Hindustan’, August 23). End justified the means. Clive’s Mir Jaffer ploy is acceptable even today—weaken the opponent by causing rifts.

The thought that [Winston] Churchill’s misdeeds are acceptable because he was an elected representative goes against the grain of the entire nation’s integrity. Clive was a subject of the Empire and thus the ruler would be more complicit than Clive himself. Removing his statue does not make sense.

As the author says that Clive has been removed from British history books for the last forty years, so the present generation has no idea of the antics of the British Empire and removing his statue will completely obliterate him. Only the ego of Indians will be satisfied. I would rather the statue stand and various means be used to highlight the shame for all to see. This will arouse the curiosity amongst the present generation, and questions will be asked and lessons learnt.

Now to come to the aspects concerning Seths and Jaffers of the world. Since the Ghazni and Ghori invasion and subsequent Babar’s invasion and founding of the Mughal Empire, one thing that stands out is the lack of cohesion among Indian principalities that allowed these invasions to succeed. The British followed suit based on this principle. In fact we must thank the Brits and mostly [Vallabhbhai]Patel’s diligence for getting us together as a nation.

Now, we, as a nation, must ensure that history never repeats itself. We must learn from the past that together we stand and divided we fall. A newfound sense of nationalism may to some extent be seen in this perspective.

All outsiders—from Alexander the Great to the Britishers—came here with varying degrees of avarice, with the intention of looting, capturing and trying to establish their rule. Then, why an article on a Brit alone as if other invaders came here for peaceful and platonic relationship?

Whenever a tragedy strikes the country, we all join together, lament over it, and conveniently forget the same without seriously looking into the cause of the mishap and finding a permanent solution to guard against such tragedies in future (‘Loss of vision’, August 23).

If we had taken adequate steps to analyse the reasons for the tragedy in Mangaluru airport in 2010, the recent tragedy would not have happened.

Efforts will have to be taken to review all airports with tabletop runways that pose problems, particularly in inclement weather.

I read with interest your interviews with Amit Khare, K. Kasturirangan and Leena Chandran-Wadia (August 16).

With my learning and teaching experience ranging over 50 years, I wish to state that the National Education Policy 2020 does not hit upon the crux of the matter for changing the education system at all!

While restructuring the school/college learning years, changing the curricula, introducing local languages as the media of instruction and invoking technology for delivering lessons can have some limited beneficial effects, they would not change the mindset of teachers and students. They would certainly not lead to a creative atmosphere as we have seen the previous policies.

In my opinion, based on personal experience, it is the examination system that has to be altered. We need to move away from memory testing to intelligence testing at all levels! This can be done most economically, too! It would automatically change the mindset and approach of both the students and teachers.

In her highly-prejudiced column ‘Crushed from Within’ (August 9), Meenakshi Lekhi is certainly not forthright in her expose on how the Congress is imploding from within.

Lekhi should perhaps also reflect on how her own party used every dirty trick in the trade to topple duly elected governments, including manipulating the office of governors (Karnataka, Rajasthan, Manipur, Goa and Uttarakhand being good examples ).

Your magazine should stop giving valuable column space to politicians, be they of any party.