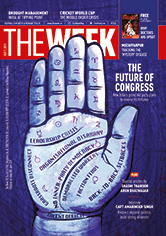 There is no doubt that there is a leadership crisis in the Congress (‘Handcrafting a resurgence’, July 7). The problem with the Congress is that it has so many leaders, each considering himself to be the best. The dynastic tag attached to the Nehru-Gandhi family should not be seen in the same light as in case of other political families in the country. Motilal Nehru, Jawaharlal Nehru and Indira Gandhi have fought for the freedom of the country, and were jailed. There is no other family that can claim such a distinction. Of course, it does not mean that the Congress should be the family property of some people.

The party needs a paradigm shift. It should move from nominations to elections.

It is really unfortunate that the Congress, even a month after the Lok Sabha results were declared, remains a ship without a captain. For the upcoming assembly elections in Maharashtra, the Congress should come out of this quagmire of shame and defeatism.

It is just a matter of time before the Congress makes a comeback on the national scene with a bang. It is time the grand old party of Indian politics reinvented itself through organisational changes at the ground level and made sure that the interests of the party are of paramount importance, in the process encouraging internal democracy and having faith in its leaders.

Despite the dynasty rule that was in place prior to Rahul Gandhi’s presidentship, the Congress was doing reasonably well.

Now, Rahul must go. There are no two views about it. He should know that the Congress has had presidents unconnected to the family.

A Congress-mukht Bharat is a proposition most Indians would not dare to visualise. A member from the Gandhi lineage, most preferably Rahul, is the safest bet to rejuvenate the Congress from its present state of ennui and disorientation. A collective leadership is a fantastic idea, but it is easier said than done in the given situation.

The Congress is passing through one of the worst phases in its political history, after two consecutive drubbings at the hands of the BJP-led NDA in the general elections. The sulk has lasted far too long.

Bihar has lost over a hundred children to acute encephalitis syndrome. Poverty, malnutrition, unhygienic living conditions, unavailability of free and quality treatment and the apathy of the government are the main causes (‘Hunger games’, July 7). A solution is not very difficult if the government is willing to devote resources for it.

The recurrence of tragedies of such magnitude never disturbs the ruling dispensation. That things were no better in Bihar before Nitish Kumar took over is well known. But the fact remains that the condition has gone from bad to worse.

Medical colleges and hospitals in Bihar are ill-equipped to deal with such epidemics.

Mani Shankar Aiyar has got it wrong. There is no “interesting parallels and important lessons to be learned” from Hong Kong and Jammu and Kashmir (‘Manifesto’, July 7). The problem in Kashmir is Pakistan’s aggression, terror attacks and separatism. And that needs firm handling. If Article 370 comes in the way, it should go.

Hong Kong is different. Hong Kong was a British Colony for more than 150 years. Even after independence, Hong Kong, like Singapore, remains a city that attracts Western expats.

No ‘Pandit’ has been driven out of Hong Kong. China regards Hong Kong, on the basis of history, culture and ethnicity, as rightly, its own. But, China exercises its sovereignty over Hong Kong in an extremely pliant manner.

Congrats to THE WEEK

Your cover story on Mahatma Gandhi was really splendid (‘The unknown Gandhi’, June 30). Thanks to it, I came to know about Gandhi’s life experiences, attitudes and ethical contribution to society.

Your cover story also revealed Gandhi’s spirituality, which is not bigoted, and his tolerance to all faiths and beliefs—a point which the present rulers should take note of and emulate.

Please keep up such educative and revealing stories.

I have always read letters to the editor in your magazine praising or criticising columns. However, there is not much appreciation for your graphics and illustration team.

In the cover story (June 23) on first-time women MPs, the title of each section matched the outfit worn by that particular woman politician. The graphics team has added quite a punch to every story, taking the cover package on new-age politicians to the next level.

I am totally impressed with THE WEEK’s design team.

I am not a grammarian of the calibre of P.C. Wren and H. Martin to assume scholarship, but I have been a freelance writer for the past five decades. I was surprised to see that the word ‘ground’ used in my letter was edited to ‘grounded’. A pilot is grounded; teeth are ground (‘Letters’, July 14).

People known to me may grind their teeth after reading it.

We regret the error.