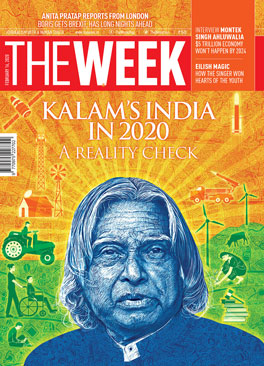 The dreams of A.P.J. Abdul Kalam sprouted from his rooted life

WHEN A.P.J. ABDUL KALAM made his maiden presidential visit to Thiruvananthapuram, two unlikely people made headlines—a cobbler and the owner of a small restaurant. The president called on both of them, and at least one was his guest at a Raj Bhavan reception. George was Kalam’s old cobbler, the man who extended the life of his sandals for all the years he was at the Vikram Sarabhai Space Centre (VSSC). Parameswaran Nair owned the vegetarian Sree Guruvayurappan Hotel; Kalam usually had two meals a day there.

As this issue of THE WEEK takes stock of how Kalam’s vision 2020 has panned out, I believe that the former president’s rooted life is what made him dream about a better future for everyone in this country. So, what is the status of the dream? In this cover story we look at eight sectors: defence, space, agriculture, education, telecom, health care, judiciary and urban infrastructure.

The writer of the lead essay is Arun Tiwari, co-author of Kalam’s autobiography—Wings of Fire. Calling a spade a spade, Tiwari highlights uncomfortable truths while acknowledging the areas in which the country has made progress. Black money, he says, is back and “big people are not returning bank loans” because they have political protection cutting across party lines. While Tiwari himself aspires to see India becoming a $5 trillion economy, in another article in this issue economist Montek Singh Ahluwalia asserts that the goal is unlikely to be achieved by 2024.

The other voices in the cover story include NITI Aayog CEO Amitabh Kant, who argues strongly on the need for investment in urban infrastructure. A. Sivathanu Pillai, founder CEO of BrahMos Aerospace, makes a case for India becoming the top player in the space business. I am sure you will like the cover story, dear reader, and it will inspire many to work towards the dream that was shown to us by the humble colossus from Rameswaram. I also hope that the suggestions in the articles will help the government take stock of how far we have come and how much longer the road is.

Of all the images Henri Cartier-Bresson shot in India, an iconic one came from Thumba, home to VSSC—the image of a rocket’s nose cone being transported on a bicycle. The other photo attributed to Cartier-Bresson shows two men squatting on the ground, working on a rocket’s payload. One of them is shirtless and in glasses; the other one looks worried. The shirtless one is ISRO veteran R. Aravamudan and the other is Kalam. To me, that image screams perseverance.

Kalam reposed great faith in three people: the father, mother and teacher. Seeing how he turned out to be, I bow my head in homage to those three personalities in his life. His life also holds a mirror to us and asks this question: How good a father/ mother/ teacher are you?

Speaking of photos, let me wind up by sharing a rare privilege that THE WEEK had. If you have seen Wings of Fire, you would surely have appreciated the cover image of the pensive Kalam. It is from our archives. When Universities Press asked us for the image, we were more than happy to grant permission. And the person behind the camera was a photographer whom Kalam liked very much—B. Jayachandran, former senior picture editor of the Malayala Manorama.