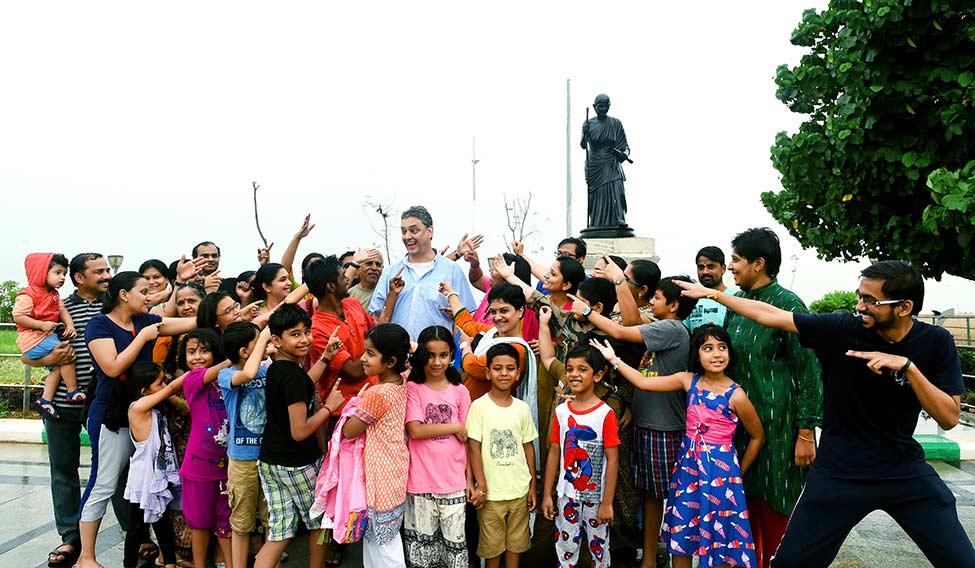 Man of many stories: Eric Miller with participants of his workshop at Chennai’s Marina Beach | Sanjoy Ghosh

George Uglow Pope, or Pope Iyer as he came to be called, was an English missionary who spent 40 years in Tamil Nadu, translating Tamil works into English. A statue of his stands on Chennai’s Marina Beach front in honour of his contribution to the Tamil literature,. On a rainy Sunday morning in August, Eric Miller stood before the statue, wearing his blue raincoat like the way how Pope wore his cape, and told a group of 20 people the story of the scholar’s journey in India.

Miller, who is in his fifties, is possibly the only non-Indian storyteller in the country right now. He first came to the country, to Chennai, in the late 1980s for his master’s research in folklore. He heard the saga of Kannagi, the woman who cursed the city of Madurai for her husband’s wrongful death at the Pandyan king’s court. He fell so much in love with her story in the epic Silapathikaram that he left his hometown New York and settled in Chennai.

“I was looking to research ancient culture for my thesis and didn’t find New York big on history. I chose India, and Tamil Nadu chose me,” he says. “I came with the mindset that most Indian stories were mythology but Kannagi was a real human story. In New York, we have the expression, ‘you can’t fight city hall’, but Kannagi fought and won. While most epics glorify military might, this was a critique of state power. It had a huge influence on me and became a turning point.” Fortunately for Miller, his exposure to the arts had been set early—both parents were artists in cinema and dance, and in his teenage he enjoyed writing plays.

Living in Chennai, Miller studied Kannagi in depth, covering a trail of 400km from Poompuhar to Madurai on foot and later conducting historical walks about the legend, with plans to help develop a museum along the route. He married psychotherapist Magdalene Jeyarathnam, and in 2007 they set up the World Storytelling Institute. He looks at the art as mix of public speaking and theatre. “Storytelling falls under communication skills and I suggest people to tell the same story from different points of view. The idea is to become articulate and compassionate,” he says. The couple plans to take it forward, making use of her work in ‘expressive art therapy’ that includes storytelling for healing and his background as a storytelling coach and critic.

Technology plays a big role in Miller’s work to dispense ideas. For the storytelling session that Sunday morning where the youngest pupil was an eight-year-old boy dressed up as a military figure, enacting the story of Subhas Bose, Miller had coached his students the previous evening using video conferencing, especially on narrating Kannagi, his favourite. “I have been using video conferencing since the 90s and it has helped me tremendously to learn and spread storytelling,” says Miller, who holds what he calls ‘Skype Storytelling’ for students in different parts of the world. He also held Chennai’s first storytelling festival in 2013. It acquired themes in the following years: healing in 2014, teaching and training in 2015 and communication in 2016. “Next year, we plan to base it on styles,” he says.

How does he look at the trajectory of storytelling? “There was a global storytelling revival in the 1960s. Colour TV came to America then, leading to a fragmentation of families and a culture of separation. There was a backlash against the corporates and government with a going-back-to-nature, growth of experimental theatre.... Storytelling for us grew out of that back then,” he says. “Interestingly, India still has a traditional storytelling space, whether it is the grandma stories or folk forms like villupattu. Last ten years have seen more storytelling here. Especially with cinema and TV becoming prominent, there has been a need to reconnect with people, recycling tradition, etc.”

Homegrown storyteller Laura Simms has been Miller’s greatest inspiration. “Every word of hers feels like the ringing of a bell. There is so much clarity to her sense of communication. She doesn’t see storytelling as entertainment but as a ritual that connects our inner selves to the matter. As you are telling, she says, you are also listening. We must develop the ability to ‘listen to the ghosts of a place’, ‘listen to the weather’.... She brings a mystical sense to the form of storytelling....” he says, trailing off fittingly.

A MUSE TO MANY

Apart from being a key figure in storytelling, Kannagi is also worshipped as a goddess in some places—for instance, as goddess Pattini in Sri Lanka and Bhagavathy in Kerala. The first film on her came out in 1942, while the latest one—Paththini—was released in Sri Lanka earlier this year.