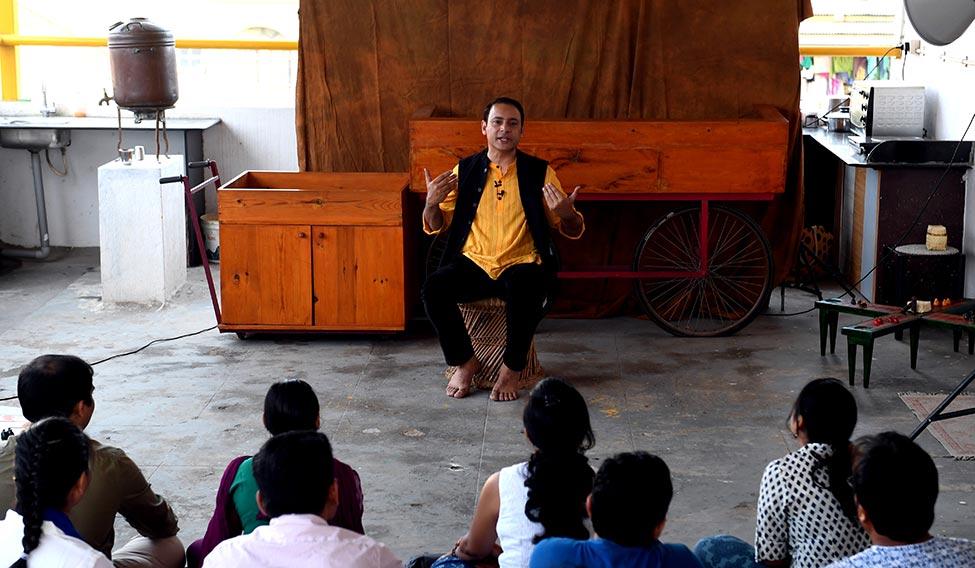 The setting is apt. Up the staircase of a toy store named Kavade (cowrie shells in Kannada) that houses traditional games in Bengaluru’s Seshadripuram area, the terrace has been readied—chairs and mats spread out, an oven in the corner wafting promises of banana-filled chocolate sandwiches, the sun gleaming behind trees and buildings, readying to turn in for the day—to host a storytelling session for adults.

Ameen Haque, 44, founder of Storywallahs, enters wearing a cheerful ochre jacket and takes his place in front of the audience. Today, he has chosen a set of three stories, cushioned between four poems. As the evening breeze intensifies, Haque fishes out a harmonica, and plays the melodious tune from the famous 1953 film Patita, ‘Yaad Kiya Dil Ne’. The cacophony of the traffic below is drowned out, almost purposefully. The opening ritual sets the mood. It is an evening of love and longing.

The hour-long session begins with a poem in Hindi, composed by Haque, told from an old man’s perspective, about living in the moment. An African story about trust in a marriage follows. The next poem, also in Hindi, is a tragic love story, where Haque invites the audience to join in with singing the chorus line. An African story called ‘Roof of Leaves’, about a tribal couple, is next, followed by an English poem about love at an older age. The last story, a European one called ‘What Women Want’, is his favourite, ending with another poem in Hindi, called ‘Baaton Baaton Mein’. Haque takes care to choose stories that are copyright free, might have been passed down generations or where it is difficult to ascertain the author.

“Stories are a glue that bind people in society. For children, I start with singing an adaption of the Hindi song ‘Halwawallah Aa Gaya’ with ‘Storywallah Aa Gaya’, and for adults, a tune on the harmonica,” says the soft-spoken narrator.

Narrators like Haque are well straddling the traditional form with new media and technology. On World Literacy Day this year, he did a live narration on Facebook of writer and social worker Sudha Murty’s book, Grandma’s Bag of Stories, as part of Kindle’s storyteller series. “I was told the video got seven lakh views. When some parents and kids told me they watched it together, it felt like old times. Storytelling by grandparents has been taken over by TV. With fast urban living and technology proliferating our lives, there is magic in oral storytelling. It’s like exercise for the imagination. Kindle is a reading device so the series promotes the brand in a certain light,” says Haque, who has a background in advertising and theatre.

It wasn’t an easy or planned journey though. As a child, Haque was shy and spoke with a stammer. That led him to become an avid reader, devouring popular Enid Blyton titles and Indian epics. His mother, an agricultural scientist, coaxed him into debating that helped him develop a love for the stage and lose the speech impediment. “All tracks—theatre, advertising, debating and education—converged for me in 2012, when we started Storywallahs, a company that helps people harness the power of storytelling.”

Haque has been quoted as saying that stories are ‘wisdom disguised as entertainment’. “Why have stories survived hundreds of years? We don’t use kerosene lamps or horse-drawn carriages anymore but we still tell stories. Whatever happens in our lives has happened in a story before, in someone else’s life. We look for our answers in others’ stories.” How does he look at himself in this role? “I would call myself a revivalist storyteller, who is part of bringing back the form in today’s times. The good thing is more people are able to call themselves professional storytellers today and eke out a living from it. I sustain myself through workshops, training others, especially teachers in designing a story-based curriculum,” says Haque, who is now working with a select number of schools such as the Shri Ram School and Vasant Valley in Delhi to use the medium as a way to dispense sex education. “It is a sensitive area but an important one. The idea is to work with children and help them narrate issues that might be difficult for them to speak openly or directly about.”

Facebook, in association, with Kindle has started live storytelling that people can watch or listen to on their news feeds. This September, Sony Pictures started a new age stories series in a video format for the Indian millennial audience, roping in filmmaker Vikram Bhatt to narrate his short stories.