Is Khasi duitara on a revival path in the land of guitars?

The folk instrument is open to modern makeovers among the youth 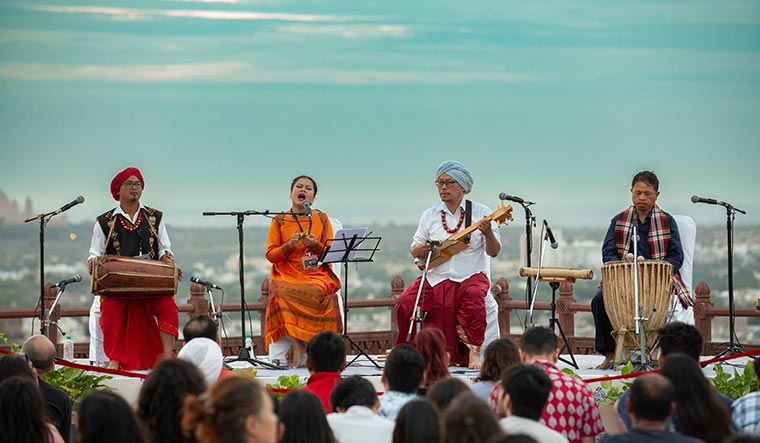 Harmony project: Mebanlamphang Lyngdoh (in blue turban) performing duitara with a group of Khasi musicians at the Jodhpur RIFF.

In a royal garden of the majestic Mehrangarh Fort in Jodhpur, Mebanlamphang Lyngdoh, from Shillong, is demonstrating the rich, deep, polyphonic sounds of Khasi folk instruments. One of them is the four-stringed lute—the duitara—the iconic Khasi music instrument. Lyngdoh, musician, educator and researcher—has done his PhD on the playing and crafting techniques of the duitara. As Lyngdoh finger-picks his modified duitara much like a guitar, Maharaja Gaj Singh II of Marwar looks on from the sidelines. He, along with Sir Mick Jagger, are patrons of the annual Rajasthan International Folk Festival (Jodhpur RIFF), where Lyngdoh and his team of Khasi musicians have been invited to perform. Soon the maharaja remarks, "Your opening notes reminded me of Take 5."

There is a tired (and often distressing) cliche in modern music history of India, which calls Shillong “the rock capital” or the hotbed of western music. But, a few days at Jodhpur RIFF made audiences discover a Shillong beyond chamber choirs and rock bands. Lyngdoh fiddled with the guitar when he was 12, before he discovered the duitara. “Back then we had only seen or heard the duitara on Doordarshan or the radio. I loved the sound of it, and it tickled my thought ‘what if I tried it myself.’ I found a cultural institution which taught the instrument,” said Lyngdoh, during an interactive session at Jodhpur RIFF.

“Some 20 years ago, there was hardly anyone who knew how to play the duitara in the city. If we wanted to perform with the instrument, they would not take us seriously. Sometimes they would slot our performance after the vote of thanks. A lot has changed now with cafe culture and the plethora of performance venues,” said Lyngdoh, who teaches in music schools where the popularity of guitars and keyboards does not dent the interest in duitara. "Many young bands like Summersalt and Da Minot have incorporated the duitara in their sets. One of India's most famous blues-rock band Soulmate, from Shillong, also began performing as Soulmate and the Clansman in 2019 to engage with their interest in Khasi music. Lyngdoh is part of Soulmate and the Clansman.

There is one theory that Western instruments like guitar got introduced in the traditional Khasi culture of Meghalaya with the coming of Welsh missionaries in the Khasi and Jaintia hills from 1841 onwards. The growing influence of Christianity born out of the Welsh Methodist Mission led to a fightback in 1899 with the formation of a collective called Seng Khasi to protect the indigenous culture, language and religion of the Khasi people. Gareth Bonnello, aka the Gentle Good, a 41-year old Welsh singer-songwriter and folk musician, has been closely collaborating with Khasi musicians since 2017 to understand historical musical connections between the two communities as part of his PhD thesis. Last year, he also released an album called  ‘Sai-thaiñ ki Sur' which in Khasi means the weaving of voices. Recorded in Shillong and other parts of Meghalaya, the album pays homage to folk songs, missionary hymns, poetry and identity of both the cultures. Bonnello also learnt the duitara in Shillong and his album cover has a picture of the folk instrument alongside the traditional drums of Khasi culture. “Prior to the arrival of Welsh missionaries, there was no standard form of Khasi music writing. Almost everything was contained within an oral tradition. What I find fascinating is how Khasi musicians have such a strong, recent link to the oral tradition," said Bonello during the demonstration, indicating how the duitara represents the history and origins of the Khasi tribe.

Jodhpur RIFF is known for pulling off the most mesmerising cross-cultural collaborations on stage against majestic skylines of the royal fort. The 13th edition of this prestigious roots music festival saw Yurdal Tokcan, often cited as the finest oud player in the world, collaborate with sarangi maestro Ustad Dilshad Khan, who was one of the laureates at the Aga Khan Music Awards this year. The mystical harmony of two cultures coming together was visible when Bonello took to the stage with the duitara and jammed with Lyngdoh and his group of Khasi musicians wielding drums and cymbals to relive the tales and tunes of an ancient past. It was a seamless connection with a primal consciousness we are born with.

Maya Lyngdoh Mawlong is a singer-songwriter from Shillong. She trained at the Bangalore Conservatory School of Music and also holds a fellowship from the London College of Music. She now teaches in Shillong and was in Delhi last month as a visiting artist at the Meghalayan Age-The Store. Mawlong doesn't think the duitara has picked up in any visible way in Shillong. But she is helping build awareness around it in her own way. "If there is a music class in Shillong, there will be drums, guitar and the piano. It is still not used every day, except in folk music showcases or traditional functions. The only way to bring it back is to modernise it. I am trying to do that with my music. Why can't we play an Ed Sheeran song with a duitara?" asks Mawlong.