The mass protests of the past decade in India before Narendra Modi became prime minister were largely about corruption, women’s security and corporate greed. After he came to power, protesters were concerned over a “New India” where the sangh parivar ideology was spreading. The book Inquilab: A Decade of Protest chronicles these voices of protest.

Actor-activist Swara Bhasker’s foreword sets the mood and context for this compilation of protest letters, lectures and speeches. She observes that throughout the past decade, the state machinery “existed in a… state of paranoia with regards to citizen’s self-expression”, and that the Modi government took the paranoia to new heights, criminalising dissent, using draconian laws against protesters and branding them as anti-national.

The book notes that the most characteristic feature of the protest movements across the world in the past decade has been their “close relationship with technology—namely phone cameras and social media”. It recalls that the Nirbhaya movement of 2012, Not In My Name (against mob lynching) of 2017, and the anti-Citizenship Amendment Act movement had all begun with clarion calls on social media.

From the violent demonstrations that erupted in the Kashmir Valley in June 2010 to the Shaheen Bagh sit-ins that started last December, the book offers a timeline of mass protests in the country in the past decade. It also documents the most relevant excerpts of protest texts of each movement—from Rohith Vemula’s suicide note to Nabiya Khan’s poem from Shaheen Bagh, ‘Ayenge Inquilab Pehenke Bindi, Chudiyan, Burqa, Hijab’.

The book is a reminder that voices of dissent are crucial for democracy to thrive. It is also a testimony that “woke India” is finding creative ways to carry on its fight against fanaticism. 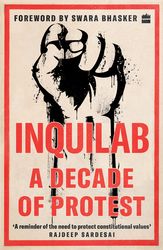 Inquilab: A Decade of Protest