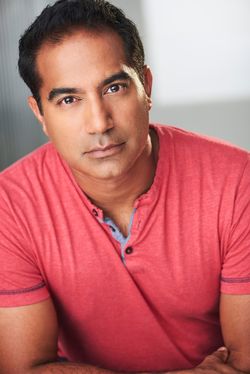 Kamal Khan, an actor of South Asian descent, was born in Germany and grew up in the UK. He speaks Hindi, Punjabi, Urdu and Swahili fluently. He had a recurring guest role in Mike Flanagan’s The Haunting of Bly Manor, one of the top ten shows on Netflix currently. Khan has played the lead role of Tony in West Side Story and Romeo in the West End production of Romeo and Juliet. He has also produced a Bollywood music album, ‘Jazbaa’. He talks to THE WEEK about his various passions and how he balances them all.

Q/ Tell us about The Haunting of Bly Manor and your role in it.

A/ It is a gothic love story. Mike Flanagan adapted it from the book, The Turn of the Screw, by Henry James. I play an older version of one of the characters. I give a speech in the beginning that sets the stage for the story. There are elements of loss, too. [As I say in the show], “To truly love someone is to accept that the work of loving them is worth the pain of losing them.” It was also great to work with Mike. I love that he does not cast actors based on their descent or accent. It does not matter what colour you are.

Q/ Does that mean that being an actor of South Asian descent has caused you problems earlier?

A/ I have not seen it as a problem, but rather as an opportunity. You have to accept who you are. For me, what matters is bringing the characters to life, no matter whether they are American, English or Indian. So far, I have not really been typecast. I was the first South Asian to be cast as Romeo in the West End production. It is really about perseverance and following your passion.

A/ Yes, definitely. One of my favourite actors is Aamir Khan. He does everything with a difference. I love his style, innovation.... I am also a fan of Yash Chopra and A.R. Rahman. I grew up listening to songs by Mohammed Rafi and Kishore Kumar and started singing Rafi songs at the age of seven.

Q/ Other than modelling, acting and singing, you have also done voice-overs for games. You are currently working on an audiobook and writing a film script. Are you very experimental by nature?

A/ I am full of life. I don’t want to waste a single moment. Life offers so many opportunities, and I have got the energy [to explore them]. I only wish I did not have to sleep to survive (laughs). If you love something, you should follow your heart and pursue it. I always say that some people dream of great things, and others stay awake and do them.