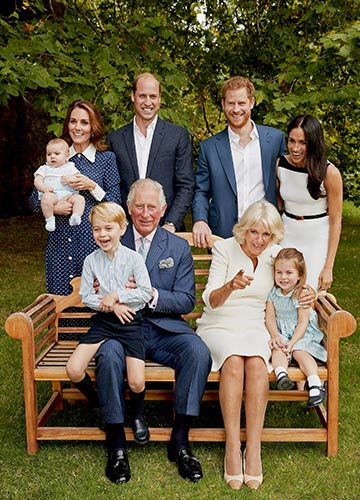 This is a happy ending that begins when the prince drops his title. The negotiations for Brexit deal are being ironed out. “Megxit” is over and is so far a success. Prince Harry and Meghan Markle have repaid $2.4 million to British taxpayers, which was spent on the renovation of Frogmore Cottage. They have bought a $14.7 million seaside home in California. And, like everything that spells the perfect career for the famous, they have signed a deal with Netflix to produce content like the Obamas.

Finding Freedom offers a glimpse into why this might just be the ever-after they dreamt of. It is a breathless account of the romance that became a worldwide obsession and the marriage that finally led to the couple leaving the royal fold to make a living as commoners.

“Few things remain secret between royal households,” write Carolyn Durand and Omid Scobie. There are a few that spill like the inside story of Meghan wanting a different tiara to wear on her wedding day that made news.

Meghan did not have only to contend with the in-laws in a family that can only rival an Indian one—in terms of its expectations—but also the “forces within Buckingham Palace”. Little incidents had built up, convincing Harry that they would never be happy in the palace. Their story has just the right amount of family drama to make the book a compelling read.

Fitting in was always going to be difficult for Meghan, according to the writers. She was a different kind of royal—a celebrity from Hollywood, who was outspoken and valued having a voice. The royal protocol of not responding when attacked was not easy for her. When they were dating and a picture of her wearing a gold chain bearing the initials M and H went viral, she got a phone call from a senior Kensington Palace aide. “She was advised that wearing such a necklace only served to encourage the photographers to keep pursuing such images—and new headlines. She said little during the call, choosing instead to listen to the counsel,” say the authors.

Pieced together and filled with confidential sources, the book paints a picture of a stuffy world for Meghan, the kind that Princess Diana had found herself trapped in. She did, however, make an effort, including taking survival skill classes where a kidnapping is staged and she is taught how to become friends with the enemies, claim the writers.

There is insight into Harry’s sensitive nature, the friction over money, the relationship between Prince Charles and his sons and what happened at the “Sandringham Summit”, where Harry, Charles, William and the Queen met to find a way to help the Sussexes stop being working royals.

The relationship between the brothers had been tense since Harry started dating Meghan. When William sat his brother down to discuss his new relationship, he told Harry: “Don’t feel like you need to rush this. Take as much time as you need to know this girl.” According to the writers, “In those last two words… Harry heard the tone of snobbishness that was anathema to his approach to the world.”

The book makes no pretence of where the authors’ sympathies lie. Scobie is dubbed Markle’s “mouthpiece” and Durand covered the royals for 15 years. Unabashedly supportive of the couple forging their own path, this is about independence.

Excerpts from the chapter ‘Leaving Toronto’:

Meghan was feeling a little emotional as she looked around the boxed-up living room of her Toronto home. With endless late nights on the Suits set and so many farewells, it took more than three weeks to pack her life into the boxes that now surrounded her in early November 2017. A moving team had just left, marking furniture with different labels for overseas shipping or storage, and sheets were wrapped around her white cotton sofas, leaving nowhere left to sit.

She knew that the moment she gave up her role on Suits and moved to London, her acting career would be over. Forever. No turning back. In some ways, it came as a relief. As she got older and saw more of the world and saw she had more power to help change it with her platform, she began to think about moving away from acting and toward a career that was more meaningful.

Leaving acting, something she had spent so long working to achieve, was also “terrifying,” as she admitted to friends. At one point she had dreamed of moving into movies and meatier roles. As she moved into her mid-thirties, however, her dreams and aspirations started to change. A voice inside her kept telling her she could be doing so much more with her platform. That was one inspiration behind The Tig. But she also looked up to actresses like Angelina Jolie, who had become a force of her own in the charitable space, focusing mostly on humanitarian projects that she interspersed with the more commercial ones, and funding her life with the occasional brand deal. At one point that was Meghan’s career model. But then she met Harry. If she was going to have a real future—and family—with him, she had to give up acting altogether.

On November 20, Meghan landed in London, knowing the British capital was no longer just where her partner lived. It was now her home. While the past few weeks had been challenging, this felt right. She was excited.

Harry felt guilty that she had to give up so much—her home, her career—to fit into his world. He was always worried about disrupting her life. Privately he harboured fears about the road ahead. What would the press be like? Would he have to deal with prejudice from more people in his own circle and the institution? He wanted to protect Meghan, to wrap her up and shield her from all the negativity, but he knew that was impossible. He worried about her turning to him one day to say, “I love you, but I can’t live like this.” Meghan assured him she was strong and ready to “become a team.”

After she moved her things into her new home with Harry, the cosy three-bedroom Nottingham Cottage, the plan for the days ahead were shrouded in secrecy. For Harry, as a working member of the royal family, it was business as usual as he continued to attend regular engagements, including a reception for Walking with the Wounded on November 21, the day after she arrived, at the Mandarin Oriental hotel, which was just a few minutes up the road from the home he now shared with Meghan. A big supporter of the veterans’ charity since 2010, having taken part in their treks to the North Pole in 2011 and the South Pole in 2013, Harry told the organization’s co-founder Simon Daglish after he delivered his remarks to the room, “Life is very good.”

Meghan extended her personal touch beyond the walls of their cottage. She kept a box of disposable hand warmers she ordered from Amazon in the house so that whenever she went past the security gates on cold winter days, she could give a few to the guards.

Meghan always liked to make the places she lived in as comfortable and chic as possible, and she’d moved often due to the nature of her work. This time, however, her domestic bliss was partly a way to cope with the major shift her life had taken, both geographically and internally. She felt at home at Nott Cott with Harry—she’s always been able to bloom where she was planted, but she hadn’t moved to London to start a new job. She had moved to London to start a new life. And although she was used to living thousands of miles from her mother, her constant source of support, there was something about being in London that felt just that little bit farther away. They spoke on the phone or via text message most days, but it wasn’t as easy because of the eight-hour time difference. Plus, she hadn’t moved to the UK like any typical member of society; she was going to become a member of the royal family, and that was a change that no one can truly be prepared for.

With Harry and Meghan holed up in their love nest, rumours of their engagement hit a frenzy—chatter not quieted by the fact Kensington Palace aides were more tightly lipped than ever. Media requests for comment on their engagement status were met with no response or a promise of “nothing to report.” But the evidence was mounting. When Harry and Meghan took a sudden two-hour meeting with Jason, Harry’s head of communications, and Ed Lane Fox, his private secretary, on November 22, it was clear that something was happening.

Something had happened. But one thing was for sure: no one in the couple’s circle was about to leak the news early—especially after keeping it secret for so long. The only ones who Meghan had explicitly told were her parents and her best friends, including Jessica, Markus, and Lindsay Roth. To some of her closest girlfriends, she had more recently announced the news simply with a photo of her hand bearing her engagement ring.

“Keeping it a secret was easy for Meghan,” a long-time friend said. “It was something she could keep to herself with Harry. And an opportunity to enjoy the moment before it became public news.”

(Excerpted with permission from HarperCollins.) Finding Freedom: Harry And Meghan And The Making Of A Modern Royal Family

By Omid Scobie And Carolyn Durand