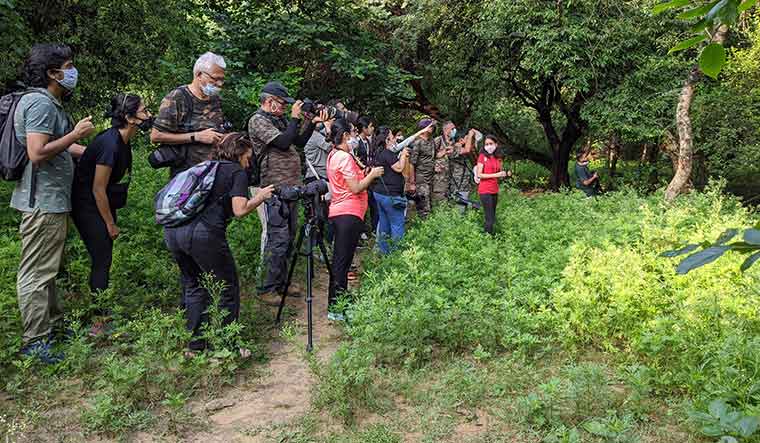 On the lookout: Lockdown birders on ninox’s nature trail at mangar, haryana, trying to locate the elusive jungle nightjar | Ninox-Owl About Nature

Amidst one of the darkest moments of World War II, as Allied troops were about to evacuate the beaches of Dunkirk, Ludwig Koch, a kindly German sound recordist living in the UK, wrote a letter to The Times urging the public to take a moment to listen to the birds. “War or no war, bird life is going on and even the armed power of the three dictators cannot prevent it. I would like to advise everybody in a position to do so, to relax his nerves, in listening to the songs, now so beautiful, of the British birds,” he wrote.

Tellingly, in times of man-made crises, humans find solace in the sounds of nature. Amid the isolation imposed by Covid-19, birders have found a silver lining. The drone of cities and human machines has been silenced, allowing the sound of bird song to permeate living rooms and balconies once again.

“The birds were always here, but now we are able to hear them,” says Sharad Apte, a retired banker living in Sangli, Maharashtra. Considered among the pioneers of recording bird song in India, his collection of bird recordings spans 422 species and subspecies, with over 52GB of data containing more than 3,000 sound files. “Files are saved with details like species, type of call, date and time, location and comments on behaviour. I developed my own website (birdcalls.info) to share my recordings,” he tells THE WEEK.

Self-taught, he began recording bird song in 1998, acquiring better equipment and protocols over the years, so as to create a lasting archive of sounds. Over time, he came to know a calendar of bird activity: Knowing which birds would sing; where, and when.

When Apte started recording bird song, he says there were only a few people like him. Now, there are hundreds. On August 9, he held a Zoom workshop on the equipment and practices needed to take a good recording, with over 60 participants eagerly taking notes. 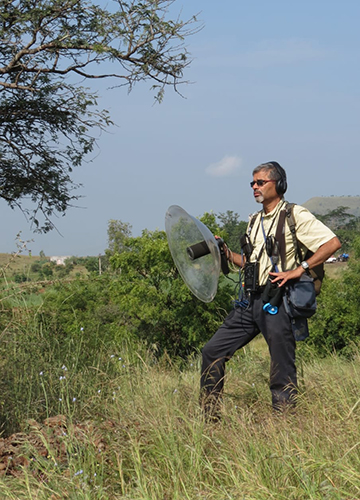 Birds and birders: Sharad Apte with his recording equipment.

His favourite bird is the White-Rumped Shama, because it can mimic other birds perfectly. Aptly, this is also the first bird whose call was ever recorded—by none other than Koch in 1889. Song birds can be excellent mimics—Apte recalls a Black Drongo that would frighten away predatory cats by imitating an angry cat.

Like how a human mother will teach her baby its mother tongue, song birds too learn to sing from their parents and surroundings. Writes Myron C. Baker in Bird Behaviour, “...in the animal world we humans are virtually alone with the songbirds in the manner by which we obtain our auditory communication signals, the fascinating processes of vocal learning.”

Vocal learning means that the same species of bird will often have a different song in different regions. Pratap Singh, a retired Forest Service officer who served with the Wildlife Institute of India, had researched for his PhD how warblers in the north-western Himalayas sang more complex songs than their peers in the eastern ranges. The reason? “We hypothesised this could be due to noisy environments. In eastern India, a lot of organisms are communicating at once, not just the birds. If you want to stand out, you need a simple signal. If you are calling out to a friend in a crowd, you wouldn’t shout an entire sentence,” he tells THE WEEK.

Being a bird is akin to being a songwriter—you sing to attract an audience and you must give the audience what it wants. Some species, like the female Zebra finch, judge males by the accuracy with which they produce complex and precise renditions of their species’ calls. Some birds, as Apte notes, prefer males who can sing for longer durations—as it implies that they are well-fed.

Like humans, birds too can spread ‘viral’ tunes. A recent study in Canada observed a curious phenomenon over the last two decades, where white-throated sparrows across parts of the country replaced their three-note calls with a two-note one. Since the new tune did not appear to improve a male sparrow’s chance of mating, the researchers could not explain its new popularity. Perhaps it was just novel, they speculated.

A spotted owlet, a shikra and a coppersmith barbet | Abhishek Gulshan (NINOX-Owl about Nature)

Crucially, what made such observations possible—changes in bird song over time and place—was the ability to crowdsource recordings. With bird songs from across the world documented on sites like Xeno-Canto and eBird, researchers have an ever-growing body of work to study.

“When you are recording bird song, you are not only recording the song but everything else in the background—insects, cicadas, dogs, whatever creatures there may be. The particular area you are recording in, that point of time, is a unique event. That may not ever repeat…That information is very valuable if you want to track change,” says Singh.

Technology has made birding more accessible than ever-before. Websites like eBird and Xeno-Canto list birds and bird calls by region; an app by Cornell University can identify a bird from a picture, and mobile phones can produce an (albeit crude) recording of bird calls.

Abhishek Gulshan, the Delhi-NCR reviewer for eBird and founder of nature awareness initiative NINOX-Owl about Nature, suggests that new birders spend time with their subjects. “A lot of people see the bird and then move on. That is not something I would advise birdwatchers to do—even if it means spending eight hours or a couple days on one species, do so, because you will understand so many different aspects about it.”

It was by watching birds in the field that Gulshan found the details that most fascinated him—how male weaver birds can make nest after nest until a female approves it (and how abandoned nests can be ‘upcycled’ by other birds like munias for reuse); how female red-necked falcons will ration the food that their male brings them, feeding him only a little despite his begs for more (possibly to keep him fit so he hunts better); or how Drongos mimic Shikras to ward off other marauding birds.

If you are ready to explore this fascinating world of birds, song and ecology, the silence triggered by a lockdown/containment zone may be your best shot at hearing the songs of nature.