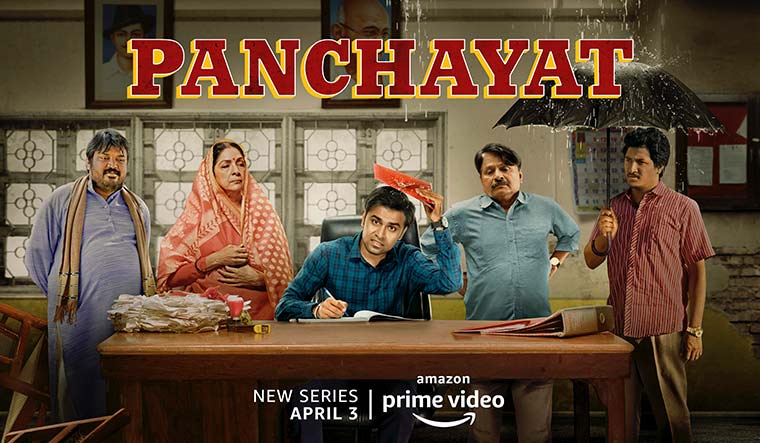 In 2018, Jeffrey Katzenberg, the former chairman of Walt Disney Studios, founded Quibi. The new streaming platform offered bite-sized, quality content designed exclusively for mobile devices. Users could watch a video both vertically and horizontally—which requires everything to be shot both ways. Preparing for a 2020 launch, Quibi roped in the biggest names from Hollywood; investors in the platform included Disney, NBCUniversal, Sony, Viacom and WarnerMedia.

In India—one of the most promising countries for the growth of digital platforms (650 million internet users!)—Katzenberg’s past and future would face each other in a strange way. Almost two decades ago, Katzenberg had turned Disney’s fortunes around. Now, Disney was writing its own streaming story with Disney+ (rebranded as Disney+ Hotstar). Disney+ Hotstar launched in India on April 2 and Quibi on April 6.

But even as new plans were being made by the platforms, the Covid-19 pandemic hit the world. Disney was planning to launch Disney+ Hotstar simultaneously with the start of the Indian Premier League on March 29. They had to reschedule after the IPL was put on hold.

The good news, however, is that the world in lockdown is consuming more OTT content. About 17 lakh people downloaded Quibi in its first week. 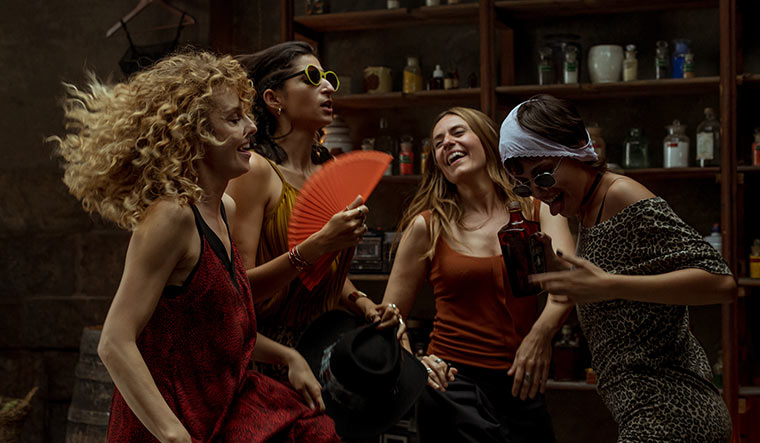 Spanish Saga: A scene from the top-rated series Money Heist.

The audience measurement firms, BARC-India and Nielsen Media Research, revealed that the consumption of shows and films on streaming services grew by 51 per cent worldwide during the lockdown. Netflix is forecasting 7.5 million new subscriptions in the April-to-June period. However, Netflix CEO Reed Hastings recently said that the company is expecting the “viewing to decline and membership growth to decelerate as home confinement ends”. 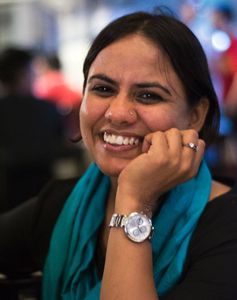 Neeraj Roy, founder and CEO, Hungama Digital Media, says that consumer sentiments are changing, and every platform is on their toes to change the programming and packaging to suit it. Considering the fact that children are spending more time at home during the lockdown, ZEE5 recently launched a new bouquet of kids’ content. “There is no doubt that these are challenging times,” says Aparna Acharekar, programming head, ZEE5 India. “But to bring lightness to the situation, an interesting mix of content has been made available for free through the initiative #BeCalmBeEntertained. It includes a mix of free and premium content. On the premium front, we launched an original, State of Siege: 26/11, along with the film Bamfaad and a short film festival consisting of nine unique films across genres.”

The other home-grown platforms like MX Player, Voot and ALTBalaji are also following a similar pattern by launching a newer line-up of content. Voot Select, the premium model of Viacom’s streaming service that was launched on March 3, has benefitted as viewers got hooked to its shows like The Raikar Case, Asur, Marzi and Illegal. Asur is now one of the top ten shows on streaming services as per the BARC India-Nielsen report. ALTBalaji has witnessed an increase in digital subscriptions with an average of 17,000 subscriptions added per day post lockdown, as opposed to an average of 10,600 in the pre-lockdown period. “This [lockdown] situation will introduce a wider set of audiences to OTT, and we believe they will continue the consumption,” says Nachiket Pantvaidya, CEO, ALTBalaji. 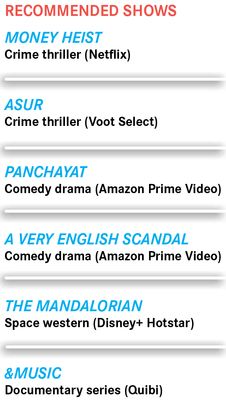 It is not a surprise then that most of the platforms are sticking to their original plan of launching newer content. The heavy dose of promotion that preceded the launch of a show or a film may have taken a backseat, but the launches continue. The fourth season of Money Heist (Netflix) is on top of the heap. Amazon Prime Video’s Panchayat, an endearing show featuring the Indian hinterland, is also on the list of most-watched shows. “That is the beauty of the OTT service. We can provide such a wide range of stories,” says Aparna Purohit, head of Indian Originals, Prime Video.

The growing competition with the launch of newer services like Quibi, Disney+ Hotstar, Apple TV+, or the entry of Flipkart into the content space, is hardly a matter of worry for others, it seems. “There are so many audiences and customers, and at any given point, they have different needs,” says Purohit.

Roy is in agreement when he says that India is not a singular market. “It is, in fact, a bouquet of several diverse markets, each with its own complexities and behaviour patterns,” he says. “Eventually, each platform and each piece of content finds its audience.” Roy adds that with regard to the current situation, the industry could face a gap in content creation until the lockdown lifts. “We might see some changes in the digital release of some big-ticket films in the future though,” he says. “Most streaming platforms release movies around three months after the theatrical release. However, this area will see some experimentation. The time gap between theatrical and digital release might reduce, or some films may be offered on digital in a pay-per-view model on day one itself.”