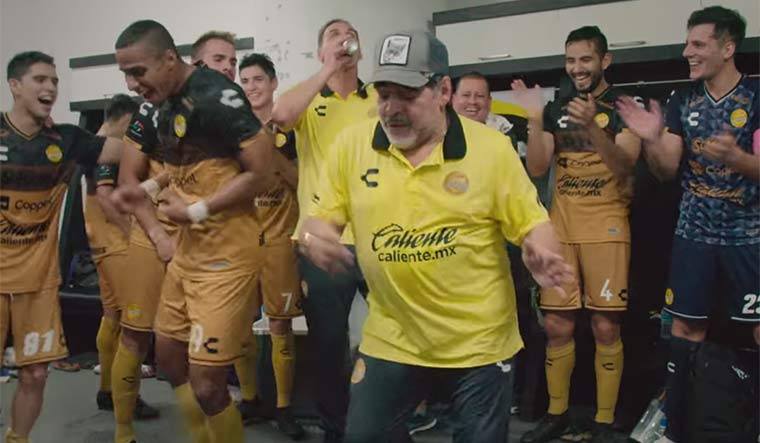 Everywhere Diego Armando Maradona goes, the cameras must follow. As the legendary ex-footballer roams the earth, he remains the cynosure of tabloids for all the wrong reasons. And so, he sets tongues wagging when he arrives in Culiacan—home to Joaquin ‘El Chapo’ Guzman’s Sinaloan drug cartel—to coach Mexican team Dorados de Sinaloa in 2018. Like taking a diabetic to a candy store, jokes a radio jockey on air.

Netflix’s Maradona in Mexico takes note of the pessimism around his appointment. Dorados is languishing at the bottom of the table when El Diego arrives. “I came here for work,” he insists. But the man can barely walk, thanks to a multitude of illnesses; the initiation seems like a PR move by a desperate club. And yet, he nearly does the unthinkable.

Maradona takes the club from the brink all the way to the final of the first half of the 2018-19 season. He is as tactically sound as the next guy on the street, but he works as a great motivator for the team and relies heavily on the tactical nous of his assistants.

He returns for the second half of the season after prolonged hospitalisation in Buenos Aires, and finds the team at the bottom again. Slowly, they claw their way back once more to reach yet another final. Throughout the series, Maradona remains Maradona. He walks out during games, fights with referees and fans, arrives hours late to fundraisers and dances like there is no tomorrow, as the club only barely keeps up with his eccentricities. Little is revealed about his private life in Sinaloa.

By the time he bids farewell at the end of the season, both Maradona and the team look significantly healthier. An encore of sorts of what he did for the city of Naples as a player in the 1980s. What’s more, he does it in a country where he single-handedly won the World Cup for Argentina. Though the focus of the limited series is on the man, there is plenty of on-field and off-field drama to make it a fun watch.