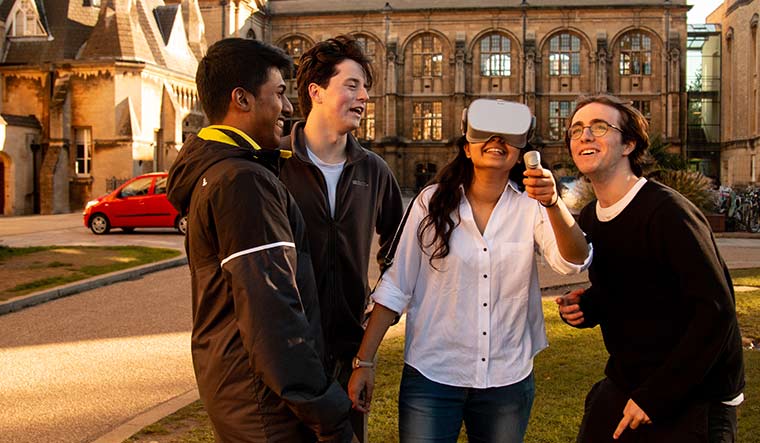 Ishar Das Arora remembers the chaos in his village on the day of the Partition. Sensing the danger, Arora’s family sought the help of a Muslim friend, who hid them in his barn. They stayed there for a few nights, but the violence did not end. Then they sought refuge in the house of a soldier, who watched over the family the whole night. When the mob tried to break in and enter, he said that they would have to kill him to get to the Aroras. “After that I don’t remember much,” says Arora. “At night, the Army came and we got to Campbellpur where my sister stayed. Then we made it to India; It has been [more than] 70 years and I have forgotten a lot, but I won’t forget that fear.”

Now, Arora’s will be one of the stories that is getting turned into a virtual reality (VR) project called Project Dastaan, founded by Oxford University students, Sparsh Ahuja and Ameena Malak from India and Pakistan respectively. The project will enable Arora to revisit the village he left behind years ago.

Ahuja’s maternal and paternal grandparents used to tell him bedtime stories about life in their villages before Partition. They would talk about how they would have loved to go back there once more. “In fact, sometimes I still see my nanu sitting in a corner of our Delhi home, scribbling Urdu poetry in his tattered old diary,” says Ahuja. “I have always wanted to make a film where I can take him back.” Malak, too, grew up listening to her grandfather’s stories of life in Hoshiarpur in India before he moved to Lahore.

That was the genesis of Project Dastaan. “We are in the process of securing local teams and volunteer networks in India and Pakistan,” says Malak. “We have also partnered with and established relations with oral historians, academics and VR experts.” The project has the backing of the faculty at Oxford's area studies department, Nobel prize winner Malala Yousafzai and former creative director at the UN, Gabo Arora. The team recently received a CatchLight Fellowship—a $30,000 grant awarded to four visionaries from the visual storytelling field.

Project Dastaan aims to customise each survivor’s experience based on their specific memories of the places they left behind. Volunteers from India and Pakistan will scout locations and identify things like how much the village has changed, certain landmarks that might have endured, and if the original homes have survived. Then the Project Dastaan team will fly to Pakistan and India to film the locations. During post-production, the footage will be edited and turned into a VR experience, which will be taken to each Partition survivor. “The project, which will also incorporate interviews of Partition survivors and their families, will be exhibited in museums as an interactive map of the subcontinent.