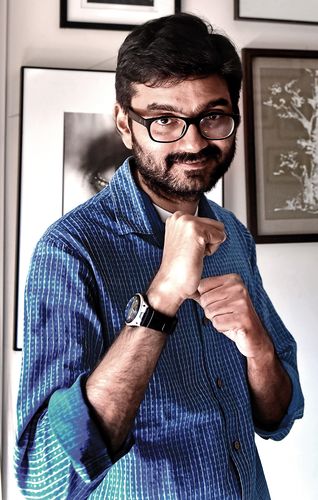 My head is just a crunchy cauliflower,” says Quasar Thakore Padamsee, who shed 12 kilos in six months. Slimming was not easy for the theatre actor; his cook even threatened to quit one week into his strict diet. These days, Quasar is very conscious of what he eats and looks at restaurant menus differently. His only grouse is that he has to shop for new clothes. He has a “limited wardrobe” and he sticks to what he has for as long as he can. “Comfort is key, and many pockets,” he quips. He may have found it hard to adjust to his new lifestyle, but on stage, he remains as versatile as ever.

Did Quasar, son of theatre veterans Dolly Thakore and Alyque Padamsee, get a jump start in his career because of his famous parents? “I would like to say no, but that would not be entirely true,” he says. “I have never cashed in on that, but I do get a first conversation, sometimes, because of it. It is a sad thing because what I say and what someone else says have equal validity. A lot of people ask [if it was] because of dad’s work. But in the theatre community, I am actually known as my mother’s son. They appreciated her going out to far-flung areas to watch their shows, so the warmth that I get is actually [because of] her warmth.”

Quasar bemoans the lack of icons like his mother in show business these days. “Suddenly all of our icons are cinematic icons. There are no personality icons,” he says. “Where are the Protima Bedis, the Usha Uthups, the Mala Sens? They were incredibly Indian, incredibly western. Unfortunately now, all the film ladies do not cut it.”

When he was just 15, Quasar had an epiphany during the play The Glass Menagerie at Rishi Valley School. “I was doing the last monologue, and at some point I paused for dramatic intent. I felt the audience pause with me. That was the moment I felt I wanted theatre to be a part of my life,” he recalls.

When Quasar was at St Xavier’s College, Mumbai, he got to be a stagehand and he was happy just being in the room. He later was assistant director in British theatre director Tim Supple’s production of A Midsummer Night’s Dream. “We got to work at The Lowry and at Stratford upon Avon. We were always on the road, so that was fantastic,” he says.

Quasar is now ready with a brand-new play, Every Brilliant Thing, written by Duncan MacMillan, which opens in March. “I read the play and I really liked it. It is about a man telling the story of how his mother was diagnosed with depression when he was a kid. He made a list of every brilliant thing to cheer her up. It is an incredibly uplifting, funny story. Very tender, very delicate and documented very seriously, but in such a wonderful, light way,” says Quasar.

He did this play because of the increasing number of people facing mental health problems. "There is an inability to acknowledge it, an inability to properly engage with it and the struggle of who has it and the struggle of the person who has not got it, but has to interact with the person, because the rules all change. There are a lot of young people out there, who are suffering from anxiety, bipolar [disorder] and depression,” he says. 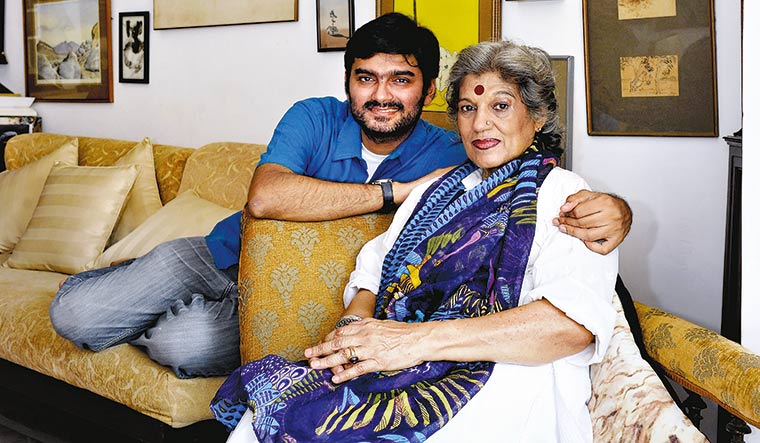 Mama's boy: Quasar with his mother Dolly Thakore at their home in 2014 | Amey Mansabdar

Quasar talks about how the play has been written to include audience participation, because not only is theatre going in that direction but also because theatre is becoming “more and more about the un-recreatable experience”. As artistic director of Quasar Theatre Productions, he says he tries to create experiences that cannot be recreated or done on another medium. For instance, about his last play, A Peasant of El Salvador, he says, “The three actors are fully aware that there is an audience, and there are moments when they go out and ask questions to the audience.... These things cannot happen in cinema or television.”

Quasar’s favourite novel is George Orwell’s 1984 and favourite play is Andrew Bowell’s When The Rain Stops Falling. But how does he choose his plays? “It is normally a very personal thing for the director. [We] pick a play that talks to us,” he says. “I have a thought in my head and the play either articulates that thought or allows me to explore that thought.” He goes on to say that the plays he has done are a barometer of his life—he picked certain plays at certain times in his life. “In all my college work, the protagonist was usually a young male. When I was [exploring] my own disillusionment with religion, I did a play about religion versus science,” he says. “I try not to pick plays where I have nothing to say. Why does this story need to be told now? Why are we telling this story? That is very important.” 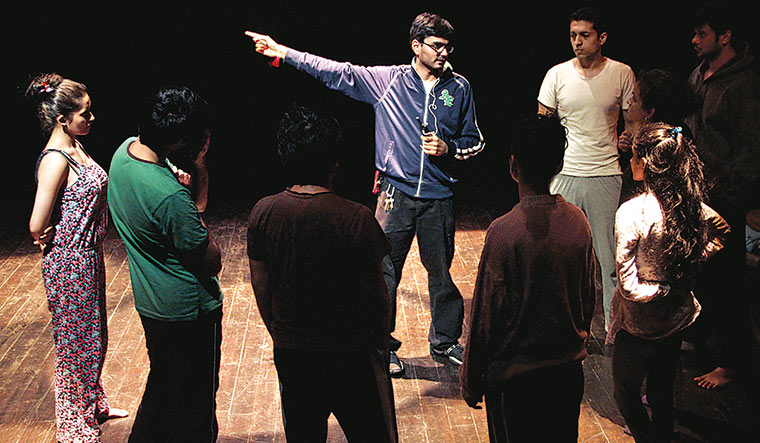 Stage craft: Quasar at a rehearsal session of So Many Socks.

Theatre critic Shanta Gokhale is impressed with Quasar’s evolution and his eagerness to experiment. “I have been seeing Quasar’s work since his college group of theatre enthusiasts got together for their first public performance. It was well mounted and well performed,” says Gokhale. “What I have admired about Quasar is his keenness to constantly experiment with new forms and even spaces. Quasar’s commitment to young theatre is extraordinary. The biggest leap he has taken to date is with Mother Courage. I admired the fact that he had chosen a serious political play rather than something merely entertaining.”

Quasar’s love for theatre shines through. “All of us who work in theatre are actually anthropologists. Our field of study is actually ‘Rehearsal’ and ‘Show.’ We are studying people and discovering what their choices are. I find that quite fascinating,” he says. Quasar also talks about theatre being transient. “It exists only for those moments and then it is gone, until the next night, unlike a film,” he says. “With theatre, you have to recreate night after night, whether it is an effect, a lighting cue or a line of dialogue. That is the joy of it! We exist for one and a half hours a night.”