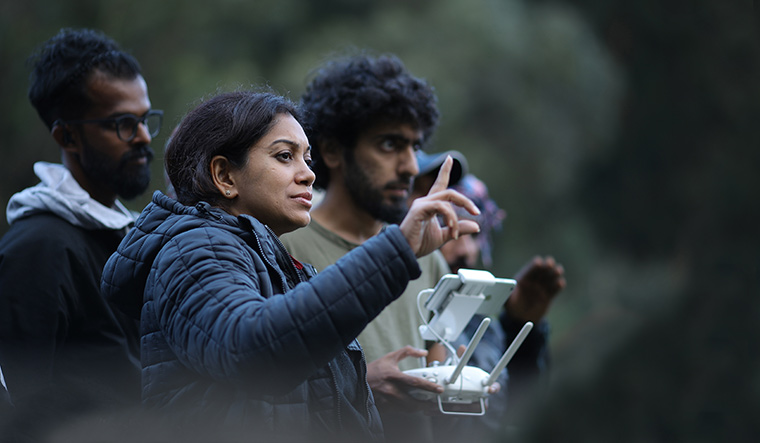 If one were to write the feminist history of the Malayalam film industry, then one of its chapters would certainly begin with the story of Anjali Menon. With every Malayalam superstar eager to be part of her films, she has changed the power equations within the industry, and shaken its patriarchal moorings. But Anjali would shrug it off, saying that although these equations exist, “when a box office hit happens, the industry sits up with a welcoming smile” for her, as for any other filmmaker.

“Then, gender does not matter,” she says.

Is she a feminist?

“I believe in equal rights for all,” she says. “Men and women have different strengths, and one need not be like the other. What matters is mutual respect and acknowledgement.”

She does not enjoy being tagged as a “woman director”, and would rather be called a director woman. But a question on gender is inevitable when one meets Anjali. How did she deal with the proverbial gender glass ceiling? “As I said, in the film industry, it is box office performance that is given highest credence,” she says. “So it does become important to work in a format that can achieve that.” She says that, initially, she was always a woman first and a director second to many. “Even now, certain people think like that....,” she says. “It may take more time for some people to see beyond that. There are still people who would rather credit someone else for the success.”

The deeply patriarchal Malayalam industry is, in fact, gradually overcoming the initial shock of encountering a successful woman director. All her films—Ustad Hotel, Bangalore Days, and the latest one, Koode—have been critical and commercial successes. She has won many national and state awards for her films. “Initially, the media did not know what do with me,” she says. “But now, that phase has gone and there is more acceptability.”

Anjali is an alumnus of the London Film School, where she specialised in editing and direction. Her first feature film Manjadikuru (lucky red seeds) was a children's take on the adult world. It won her many awards for best debut director, including the FIPRESCI award at the International Film Festival of Kerala (IFFK) in 2012. Her next film, Ustad Hotel, won her the national award for best dialogues, and also the State award for dialogue delivery. Then came the super-hit film Bangalore Days, which again won her the State award for best screenplay. Her latest, Koode, starring Prithviraj and Parvathy, was also a success.

Did she always want to be a film director? “I loved telling stories,” she says. “But I veered towards cinema around the time I hit my twenties. My family was quite surprised by my choice of career.”

A person's cinematic sensibilities are shaped by the films she watches, so which were the films that influenced the filmmaker in her? “For me, it was Malayalam films out and out,” she says. “We have had such brilliant directors like Padmarajan and Bharathan. They have all shaped my sensibilities. And outside the Malayalam industry, it is Gulzar who has inspired me [the most]. My dream is to make deeply sensitive films like those of Gulzar.”

Talking about her filmmaking process, Anjali says that she is an impulsive person. “It always starts either with a compelling character or an idea,” she says. “But I write it down only when those characters come visiting me again and again, and I feel an absolute need to put it down.”

While we were talking, a TV reporter approached her. The ever-smiling Anjali turned red when the reporter asked whether actor Fahad Fazil had given his wife Nazriya Nazim, who had taken a break after her marriage, permission to act in Koode, Nazriya's come-back film. Anjali admonished him for asking such a gender insensitive question. “Nazriya is an independent person with a strong mind of her own,” she said. “She does not need her husband's permission. It is another fact that Fahad is always very supportive. But young people like you should not be asking these kinds of questions.”

Anjali certainly knows her mind, and it is this clarity that makes actors like Prithviraj say that she is the only director whom he trusts completely. How is her equation with the actors in her films? “All the actors that I have worked with are brilliant ones,” she says. “All I do is nudge them.”

Talking about the deep-rooted misogyny, both in Malayalam films and in the industry, Anjali says there is limited point in playing the blame game. “I am also part of the same industry,” she says. “I am focusing on what I am doing to change it. Gender neutrality will not come easily. Everybody has to do something about it. The more that is done, the sooner we will get there.”

What is she doing about it?

“Gender neutrality should start at the very beginning, from the recruitment of your crew,” she says. “Every appointment letter issued from my office to my ADs (assistant directors) will have it in writing that respect is of prime importance, and that any kind of bias will not be tolerated. Ensuring all requisite facilities are available to all the crew members, and seeing to it that everyone feels safe and secure are also part of being gender sensitive.” True to her word, many members of the creative team of Koode were women.

Anjali says she has become more alert about the security of her female cast and crew after the infamous incident of a prominent actress being abducted and molested, allegedly at the behest of a superstar. Anjali is one of the leading members of Women in Cinema Collective (WCC)—an alternative group for the women of Mollywood. Much before the #MeToo movement started raging in the country, the members of WCC had fought against sexual harassment and discrimination against women in the workplace. They courageously continue the fight, and recently came out, all guns blazing, against the leaders of AMMA (Association of Malayalam Movie Artistes), accusing them of victim shaming and supporting the accused in the actress abduction case.

“The silence of many on that incident is deafening,” she says. “If sensitive, creative people do not react during such times, then who else will? It takes great courage to survive and speak up after such an incident. We must not forget what the survivor has been through. What are we doing to ensure that such horrors do not continue?”

It is the same pluckiness that motivated Anjali to cast Prithviraj and Parvathy in her films. Both actors had shaken Mollywood with their bold statements about the abduction of the actor. Fans' associations of Malayalam superstars had vowed to ensure the failure of the duo's films.

“Prithviraj and Parvathy are individuals with a strong mind of their own,” says Anjali. “Such people are so special, and I seek such people for my films. Whatever bad experiences they may have had have only made them stronger and more connected to their own selves. They bring all those experiences to their acting, and that is very good for any movie.”

Anjali exudes a certain optimism which is very rare among Malayalam filmmakers. “Maybe I am a Malayali minus the cynicism,” she says with a laugh, when asked about it. There were many pessimists who told her, when she forayed into the film industry, about women directors who failed to make a mark after their first films. “I used to keep a list of successful women directors as my reply,” she says. “I still have that list.” She can very well add her own name to the list, which includes the likes of Mira Nair, Deepa Mehta and Marion Hänsel.