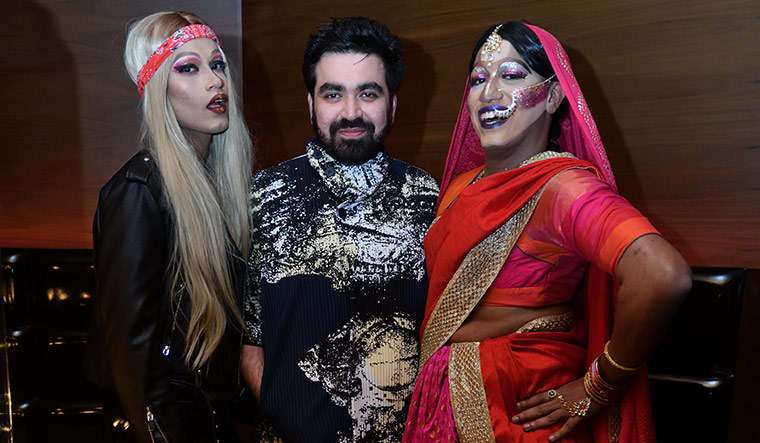 Alex Mathew, 29, is yet to clip on his fake black eyelashes. His friend gives his eyelids a dash of glitter. Tonight, he will be donning the avatar of Maya Sa from Padmavat at KittySu, the nightclub at The LaLit Hotel in New Delhi. In the course of this elaborate make-up session, in one of LaLit’s lavish rooms, Mathew talks about drag culture and his own evolution as a drag performer since 2014. In a brightly lit room, he prepares to share the stage with celebrated American drag queen Willam Belli.

What does it take to be a drag queen? A love for impersonating women, a facility for no-holds-barred make-up, the ability to carry fantastical costumes in vertiginous heels, and the most unbreakable kind of confidence. A drag queen is a male performer who is loud in his celebration of femininity, without caricaturing it. “A drag queen does not make fun of women,” says Mathew, referencing acts on TV shows like The Kapil Sharma Show. Neither is it cross-dressing. A drag performer can be 100 per cent straight, though they are regularly mistaken as gay or a transgender person. It is entertainment that is meant to bewilder, titillate and overwhelm with its exaggerated dance, drama and fashion. “Drag does not have anything to do with sexuality. Sexuality is who I am, and drag is what I do,” says Mathew.

Bengaluru-based Mathew is an MBA grad, who lived the corporate dream at giants like Deloitte and Ernst & Young, until he realised that a life behind the computer screen was not his calling. He was a born performer, with roots in theatre, but he had to overcome impediments in Bengaluru’s theatre circuit. He could not get the roles he wanted, as people thought his “thick Malayali accent” and dainty mannerisms were flaws. When he saw Robin Williams’s disguise as a female housekeeper in the 1993 flick Mrs. Doubtfire, Mathew had a brainwave of sorts. He combined his love for theatre and feminine ways to create a stage persona, Mayamma—a simple yet fiercely independent woman from Kerala, who moves to Bengaluru in search of love and better opportunities. At cafes, resto-bars, house parties and karaoke dives, Mayamma has shape-shifted from being an item girl to a rich “kitty party-type aunty”, a widow and more. 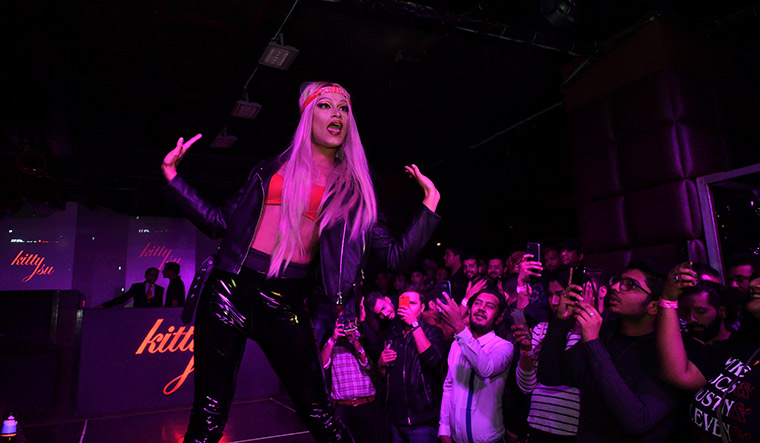 Alex now has a full-time job as a drag performer at The LaLit. And, he has quite the fan following. What stands out is his journey from performing drag in improvised setups with makeshift green rooms, to a proper stage alongside some of the best international drag queens. It signals a long overdue recognition for an art form which had existed only on the fringes. “I see a lot of growth in the queer performance scene,” said Mathew. “And, KittySu is the reason behind it. I would say KittySu is the revolution for queer performance in India.” But, while there is no denying that KittySu has been a pioneer in moving these performances into the mainstream, a new momentum is driving the drag scene in India. All thanks to the American reality series RuPaul’s Drag Race (RPDR). The excitement generated by the show has spilled into India.

Witty and instructive on all things drag, RPDR has catapulted the subversive art form into a viable career option in the US. RuPaul Andre Charles was on Time magazine’s list of 100 most influential people in the world in 2017. He has built an empire around drag performances and won two Emmys for RPDR, which is now streaming on Netflix India. Dancer and choreographer Prateek Sachdeva, aka Betta Non Stop, is one person who has been influenced by this show. Betta Non Stop is just a “regular blonde chick” who often impersonates a high-energy Lady Gaga. A hotel management graduate, Sachdeva, 25, first discovered drag in the sitcom Friends, in which Chandler’s father is a Vegas drag queen. Watching one episode of RPDR was like an epiphany for Sachdeva, who wants to perform the musical Chicago with just drags.

“RPDR has been contributing a lot in terms of drag aesthetics and style,” says Richard Joseph, aka Richie Reveal, a 31-year-old beauty stylist and entrepreneur from Mumbai. “The way you walk and talk. It has to be with poise and grace. Everybody looks up to the RPDR queens. I think that is the only channel through which the entire world can access drag as a culture.” Every drag queen has her comfort zone, and for Joseph, who has been performing drag for five years, it is being glamorous without being too unrealistic. He likes to flit from folk boho to “red-carpety” to uber chic. But, Joseph warns against being too outlandish, “which is what American drag is all about,” he says. “You have to give slow doses of drag to Indian audiences, who are opening up to it only now.” 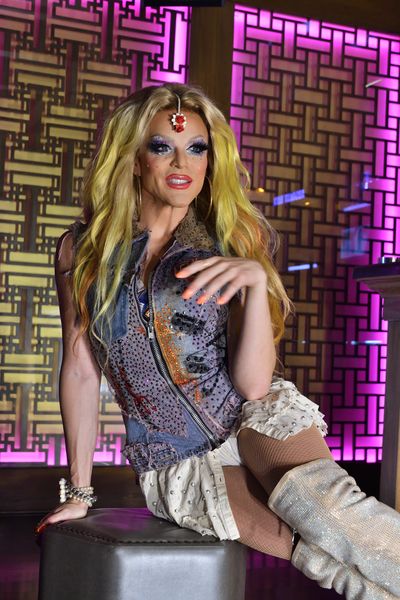 With RPDR’s influence comes its share of complexities. The show has been criticised for accepting only men who perform drag as women. RuPaul Andre Charles had to retract a controversial statement he made in March, when he said that he probably would not allow contestants who “really transitioned” during the show, hinting discrimination against cis- and trans-women. The situation is no different in India. There are numerous drag queens, but barely any drag kings. In the absence of a show that celebrates drag artists without any gender discrimination, Indian women—whether straight, trans or lesbian—do not have a source from which they can derive a sense of reassurance as drag performers. “If women want to be drag kings, the opportunities are limited. This is very similar to what has been happening to women in the queer community, The sheer acceptance or the barriers that are there for women are seeming to parallel themselves even in the space of drag artists” says former journalist and communications consultant Sharif Rangnekar.

Keshav Suri, executive director of The LaLit Group of Hotels and the brain behind KittySu, likes to call the nightclub “a historical institution”. KittySu has been flying down RPDR queens since August 2017, including the famous Violet Chachki, whose marquee act drew some 1,900 people to the nightclub.

For now, he is satisfied with cashing in on the “massive” hysteria around RPDR in India. “All drag queens now aspire to be on RuPaul’s Drag Race,” says Suri. “RPDR Thailand has just started. Who knows, maybe one day I will buy the rights.”

Back at LaLit, Willam Belli is waiting to go on stage. Belli is a YouTube star with his music video parodies. Sitting astride a sofa against a vanity mirror studded with golden bulbs, Belli exudes a ferocious aura. Preening his white mane and sculpted body, he gives the flashing cameras what they want. Ask him about his drag persona and he says, “I am not a character. I am just me. A lot of people describe it as ‘Not giving a f***’.”