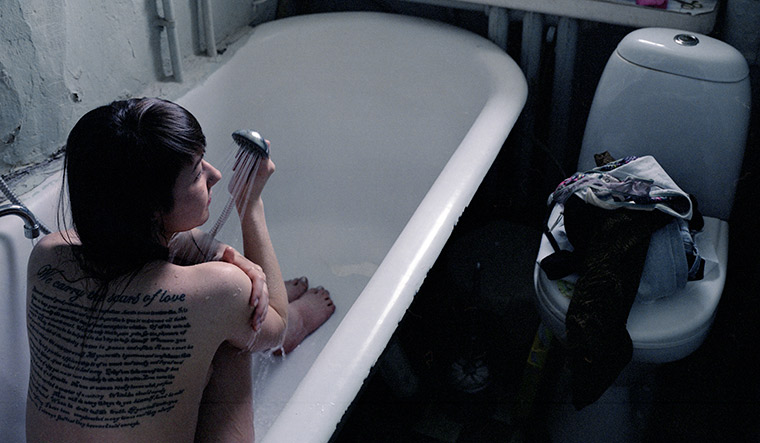 While walking the streets of Hanoi in Vietnam, at night, a story revealed itself to ace German photographer Andre Luetzen. He saw that the doors and windows of homes were wide open, and that the living rooms were extended to the streets. The private and public spaces were flowing into each other, with no discernible boundaries. Intrigued, Luetzen wrote that story—in a visual language—through his photographic sequence Public Private Hanoi, which bagged the German Photo Book Award in 2012.

The stories, like Hanoi’s, came to him accidentally throughout his career, he says. As did his medium of art—photography. “In the beginning, when I was a student at the art school, I wanted to become a filmmaker,” says Luetzen. But, in films, team work is crucial. “I don’t like working in teams,” he says. “So, I decided to go into photography.” 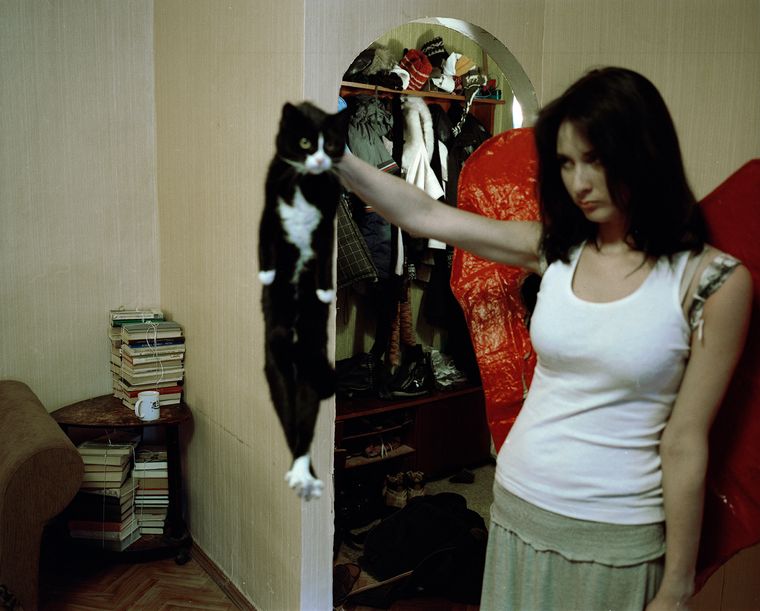 Luetzen was born in Hamburg, Germany, in 1963. He completed his graduation in visual communication at the Academy of Fine Arts, Hamburg. In 1992, Luetzen joined the International Center of Photography, New York, for advanced studies. It was here that his skills were polished and fine-tuned. For the next ten years, he worked as a photojournalist for different magazines. One of his memorable assignments was about the life of a boy named Austin, from Belfast, Northern Ireland, which was then a conflict zone. “When I first met him, he was 13. I went back when he was 15 and 17. By then, he had become a member of the Irish Republican Army, and had been to jail a couple of times,” says Luetzen. But, more than a political project, his focus was on the life of a human being growing up amid conflict.

Soon, however, he was fed up with being a photojournalist and turned towards art. He went back to his idea of becoming a filmmaker, but with a difference. He wanted to make films by sequencing single images. “This is more or less like a film,” says Luetzen. “It is documentary photography. But, by the sequencing and trying to bring in connections, it is fiction, too. It twists the interpretation and reception a few degrees for the viewers, and gives them new meanings.”

His pictures were featured in several international publications, and recognitions and grants soon followed. He taught photography at Folkwang University in Essen and at the Muthesius Art School in Kiel. He has also been conducting workshops, since 1995, in different parts of the world and has published 18 monographs. The most recent—Up-river Book (Heart of Darkness)—was a series of pictures he took while travelling up the Congo river in a UN patrol boat. 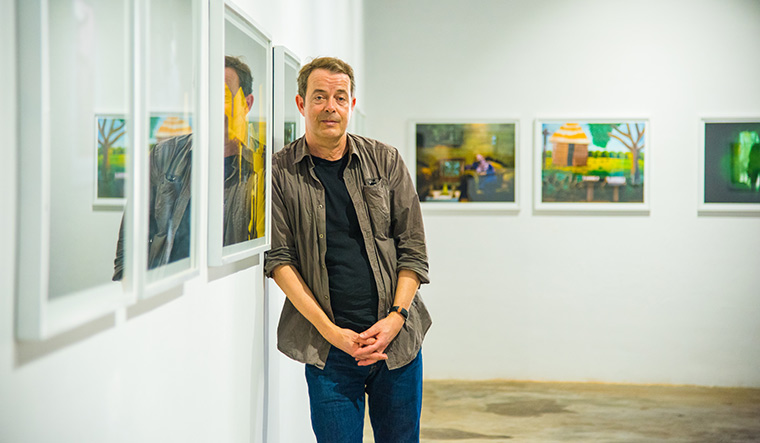 His works have been shown in exhibitions like the New York Photo Festival. His latest exhibition Living Climate—A Tale of Three Cities at Uru Art Harbour, Kochi, from January 17 to February 28, was an anthology exploring how climate affects the private lives of people in three different cities—Kochi in southern India during the monsoon (Inside Out Kochi), Arkhangelsk in north-western Russia during peak winter, with temperatures as low as -40 degrees Celsius (Zhilli Byli) and Khartoum, Sudan, in extreme summer, with temperatures as high as 45 degrees Celsius (Khartoum). Living Climate will also be exhibited in four other cities, including Bengaluru and Kolkata, soon.

The stories of the cities featured in Living Climate were in total contrast to what he experienced in Hanoi—he saw people being forced to keep themselves indoors due to the climate. In his work in Arkhangelsk, Luetzen entered the homes of people preparing for the long winter, and explored how they adapted to their habitat. “There, people are not going outside with family, but rather prefer to stay inside,” he says. In Khartoum, too, he saw that people preferred to stay inside because of the extreme heat. The city, which is the capital of Sudan, is the converging location of Blue Nile and White Nile. “Sometimes they go sit on the banks of the Nile river. But, that is not really public life,” says Luetzen.

In 2014, he came to Kochi as part of a residency project of the Kochi-Muziris Biennale. “I was thinking what can I do [in Kochi]. I was reading about the monsoon season and I thought this might be something,” he says. Here he explored how monsoon restricts people to their homes. Acclaimed Indian artist and sculptor Riyas Komu, in his critique note on Inside Out Kochi, says, “[It] eschews sentimentality in favour of raw emotion and lets the story tell itself, forcing the reader to look beyond the impeccably composed plot and themes to the discordant riches that typifies postcolonial India.” Komu pointed out during the preview of Living Climate that Luetzen’s images cut deep into the emotional lives of the people and even when doing so, there is no voyeurism in his works. 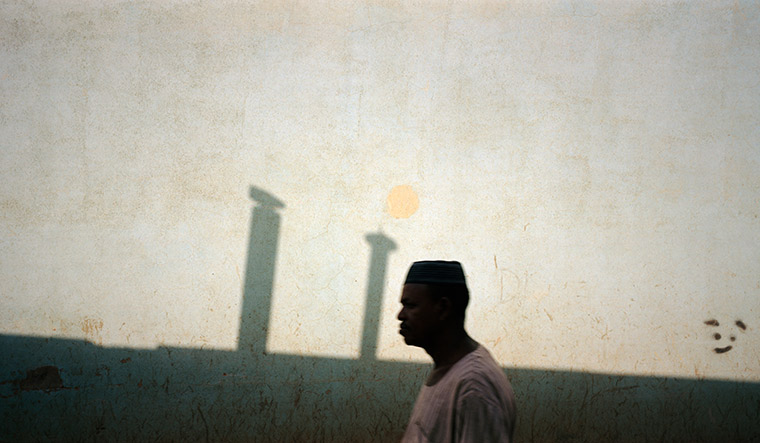 “I explain what I do and I would introduce myself to people through an assistant or translator,” says Luetzen. “Of course, there is spoken language, but there is a body language, too. People understand it without words.” And, this is what he does to relax people—make them laugh. “When you laugh together for once, then all of a sudden, from nowhere, comes a bit of trust,” he says.

Luetzen is currently working on the fourth and final stage of his Perimeter project—which is about his personal journeys to the border regions of Europe. He sees the project as an exploration of diversity of existing values in the “porous edges” of Europe and the untold stories of the European identity when it moves from big cities of the continent to its edges.

“Luetzen’s subjects do not perform for the camera,” says Leonhard Emmerling, director programmes South Asia, Goethe Institut, New Delhi. “It’s like they forgot about the camera. He captures them in a moment where they are not even aware anymore that there is a camera.” 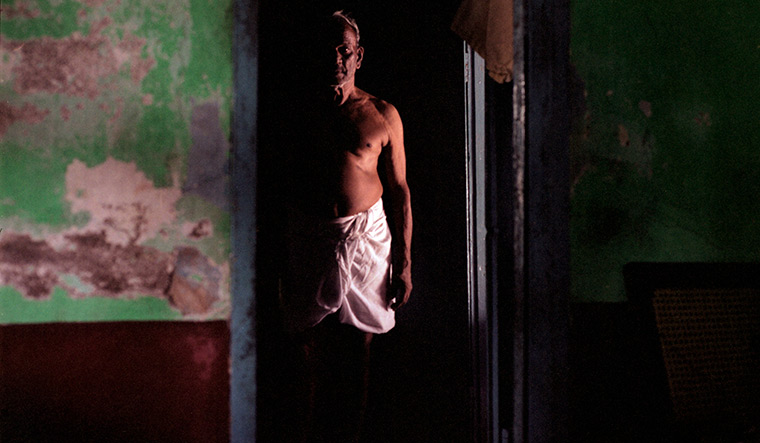 One may find Luetzen to be a little old-school, as he uses only analogue technology for his projects. He uses a 6x7 medium format Mamiya 7II camera. But, he has a reason. “When I started photography, there was only analogue photography. But, continuing with this is something. It’s a different quality,” says Luetzen. “And, it is a different process of taking pictures. Here you have just ten-frames analogue. You have to see through the finder and you have to decide. So, you have to trust yourself.”

But, he is not completely averse to digital photography. In his workshops, he uses digital. But, he is against the idea that everyone who carries a digital camera or smartphone is a photographer. “These are may be visual notes we are taking, and are not really pictures, although the quality of smartphone cameras are getting better and better,” he says. “But, that is not photography. Photography is a process of working with tools like a camera to develop your own visual language. It is a process of getting deeper and deeper into a subject.”

And, in every such deep-dive, the photographer in Luetzen captures infinite tales.