Kerala: Brawl between Governor and LDF govt shows no signs of abating

The past few weeks saw the fight descending into a public slanging match. 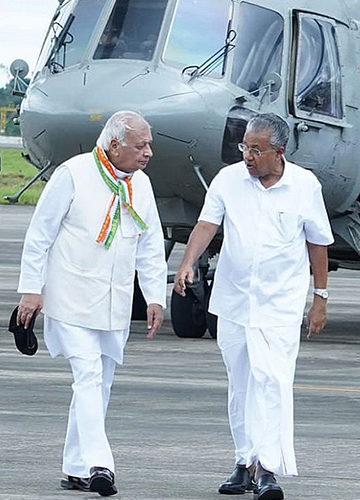 Bitterness in the air: Arif Mohammad Khan and Pinarayi Vijayan.

In March 1957, around five months after Kerala was born, the results of the state’s first assembly polls were declared. The Communist Party of India bagged 60 seats―17 more than rival Congress, but four short of majority. Staking a claim to form government, the CPI roped in five independents and elected E.M.S. Namboodiripad as its legislative party leader.

Governor Burgula Ramakrishna Rao, however, turned a blind eye and began meeting the independents one by one. All of them pledged support for the CPI, forcing Rao to finally invite the party to form government. He struck back two years later, though. He wrote to the president that the constitutional machinery in the state had broken down under CPI rule. The letter would lead to the fall of the government.

There have since been a number of instances of the governor and the ruling party in Kerala locking horns. But never has it been as aggressive and ugly as the ongoing fight between Governor Arif Mohammad Khan and the CPI(M)-led Left Democratic Front government.

Disputes between the two sides had been simmering for a while. They reached a flashpoint in early August, when the government tried to bring a law curtailing the governor’s statutory powers as chancellor of state universities. Khan refused to give his assent, and accused the government of trying to regularise illegal appointments in universities.

A Supreme Court verdict on October 21 armed the governor further. It quashed the appointment of Rajashree M.S. as vice chancellor of A.P.J. Abdul Kalam Technological University in Thiruvananthapuram. The reason: the appointment violated norms of the University Grants Commission. The “search committee” that was tasked with finding three suitable candidates submitted only Rajashree’s name to Khan, the chancellor.

“I was included in the shortlist prepared in 2018 by the search committee,” said P.S. Sreejith, an academician of repute who filed the petition that led to the verdict. “They (the committee) called me several times for an interview, but the interview did not happen. Then suddenly, the committee was disbanded and a second notification [inviting applications] was issued. I applied again, but did not get any response. On February 19, 2019, I came to know through news reports that Rajashree was appointed vice chancellor. That was when I decided to challenge it in court.”

Khan swung into action soon after the verdict, and asked vice chancellors in several state universities to step down, pointing out procedural violations that had happened during their appointments as well. The VCs, however, moved Kerala High Court, which held a special sitting on Diwali day to hear the case.

Hours before the hearing began, though, Khan issued show-cause notices to all VCs, asking them to explain why their appointments should not be considered void ab initio (void from the beginning). The court later extended the deadline set by the governor for responding to the notice from November 3 to November 7. All 10 VCs who were served notices have since submitted their response, and the court has directed the governor not to take any further action till November 17, when the hearing resumes. 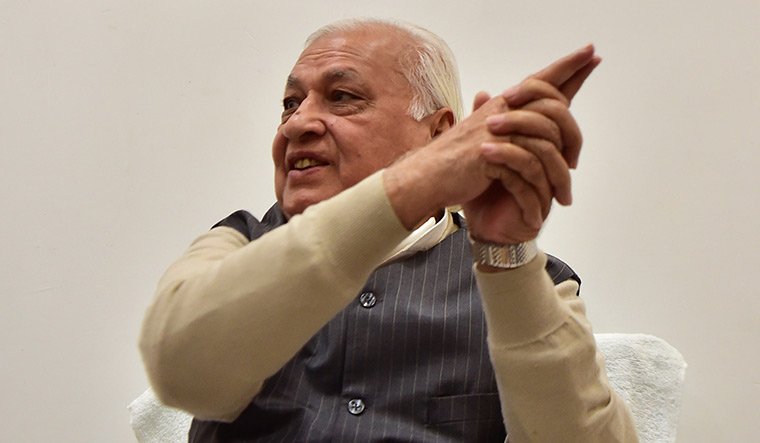 The Pinarayi Vijayan government has made it clear that it will not allow Khan to appoint VCs of his choice. After Khan appointed Sisa Thomas, joint director in the technical education department, as interim VC of the technological university, the government moved court seeking a stay on the appointment. It had earlier recommended that the principal secretary of higher education be given temporary charge of the university.

The governor-government tussle was initially restricted to the higher education domain, but the past few weeks have seen the fight descending into a public slanging match. Vijayan accused Khan of acting on the behest of the RSS, and several ministers and CPI(M) leaders have cast aspersions on the governor for “misusing his office”. Khan has been vigorous in defending himself and attacking Vijayan and the CPI(M).

On October 25, he made the unusual move of writing to Vijayan seeking action against Finance Minister K.N. Balagopal for making the “seditious” remark that those who come from states like Uttar Pradesh might find it tough to understand the working of universities in Kerala. (Khan hails from Bulandshahr in UP.) Khan also made the indirect threat that under Article 164 of the Constitution―which says that “ministers shall hold office during the pleasure of the governor”―he can dismiss ministers who publicly disparaged him. 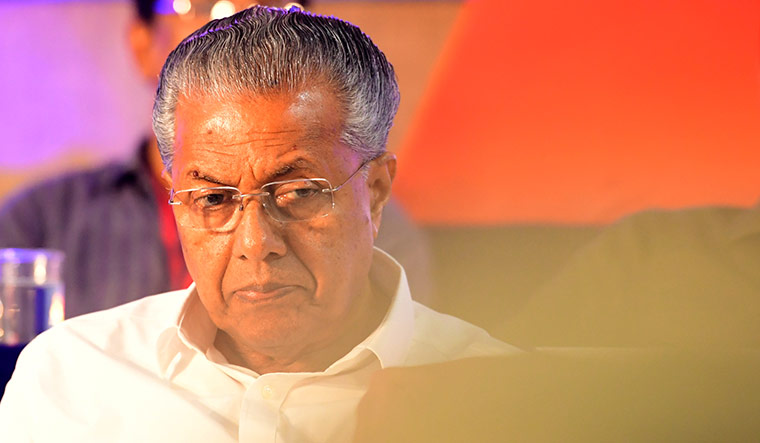 Experts have pointed out that Khan’s “pleasure doctrine” is not in line with the Constitution. But the CPI(M) has nevertheless found itself on the backfoot because of the governor’s allegations regarding illegal appointments in universities. Activists in the higher education domain have long alleged that only those who rubber-stamped the party’s decisions on university appointments are made vice chancellors.

Complicating matters for the CPI(M) is the ongoing row over a letter that was recently leaked from the office of the Thiruvananthapuram mayor. The letter has the mayor “requesting” the district party secretary for a list of party workers who can fill temporary posts in the corporation’s health wing. The controversy has given a fillip to allegations about favouritism in government appointments.

The CPI(M) maintains that Khan’s accusations are harming the state, as the government is trying to make Kerala a “knowledge economy”. It has also accused him of trying to “saffronise” higher education and destabilise democracy. The party is preparing to organise a massive protest rally in front of the Raj Bhavan on November 15.

Interestingly, the CPI(M) does not want to project it as a protest spearheaded by the party, but as a popular movement under the banner of a nonpolitical forum―Vidyabhyasa Samrakshana Koottayma (Collective to Protect Education)―comprising all left-leaning academicians and individuals.

“The actions of the governor are anti-democratic,” said M.V. Govindan, state party secretary. “Do you think that it is right for the CPI(M) to go it alone in opposing someone who is taking anti-people measures? So our idea is to bring together everybody who believes in democracy. We are welcoming everybody―even those from opposition parties―to join this huge movement. This campaign will have the participation of social activists, cultural leaders, film and theatre actors, and people from a wide range of backgrounds.”

The rally will be attended by the CPI(M)’s national leadership. Also present will be a representative of the DMK, which is currently in a tussle with Tamil Nadu governor R.N. Ravi.

The CPI(M) is also exploring legal options to take on Khan, who has vowed not to sign six contentious bills the government has passed. “The governor cannot withhold the bills forever,” said Govindan. “The Constitution itself says that the governor should act on the bills as soon as possible.”

With preparations for the protest rally in front of Raj Bhavan under way, there are no signs of a de-escalation in the fight. Khan has even dared CPI(M) workers to try and attack him on the street. “They have initiated the process of the collapse of constitutional machinery,” said Khan on November 7. “I would urge them to go ahead, create more problems, and barge into Raj Bhavan if they have the guts.”