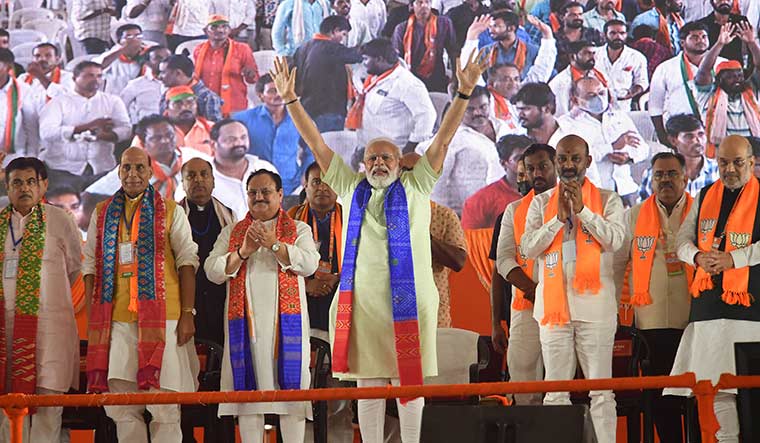 The stunning turn of events in Maharashtra has sent out a larger political message. The BJP’s deft manoeuvring oversaw Shiv Sena rebel Eknath Shinde breaking away from the party and taking with him enough men to fell the Uddhav Thackeray government. The BJP not only rewarded Shinde with the chief minister’s post, but also made Devendra Fadnavis his deputy.

“The hidden message is to the leaders of all regional party-ruled governments. The BJP will support them if they want to switch sides, and also reward them politically,” a key party leader said in Hyderabad, where the BJP organised a two-day national executive meeting—July 2 and 3—to plan its southern expansion.

The mood at the meeting was upbeat, and a similar strategy was set in motion in Telangana, a day later. The state BJP unit appointed Eatala Rajender, a former state minister who had joined the party last year, as the in-charge of a panel on new entrants from other parties—a euphemism for poaching. Similar panels are expected in other states.

The party currently has only 29 of the 129 Lok Sabha seats in the five southern states (25 in Karnataka and four in Telangana), largely because it is seen as a north-Indian party.

The Telangana meeting hinted at its future plans in the region. As of now, the BJP does well in direct fights with the Congress, but hits a wall when faced with strong regional outfits. To take on these parties, Prime Minister Narendra Modi and Home Minister Amit Shah presented a political resolution before the 340 executive members. “We want polity free of casteism, dynastic politics and appeasement,” Assam Chief Minister Himanta Biswa Sarma said, quoting Shah’s message inside the meeting. Several southern BJP leaders whom THE WEEK spoke to repeated this message.

“The sub-national pride of regional leaders means that they do not want to be seen as being subjugated by the BJP if it makes a pitch for hard nationalism,” a senior party leader said on condition of anonymity. “To bring these leaders along, they have to be showcased as key leaders and not subordinate to the Hindi-speaking leaders.”

Unlike in the rest of India, the southern states have performed well on key human development indices. “The BJP cannot target the ruling parties of the south when it comes to development or promising schemes,” said the senior leader. “Chances are they are already ahead, be it with midday meals or Rythu Bandhu (cash scheme for farmers in Telangana). So, the only strategy that remains is to target regional parties for being dynastic, caste-ridden or corrupt.” 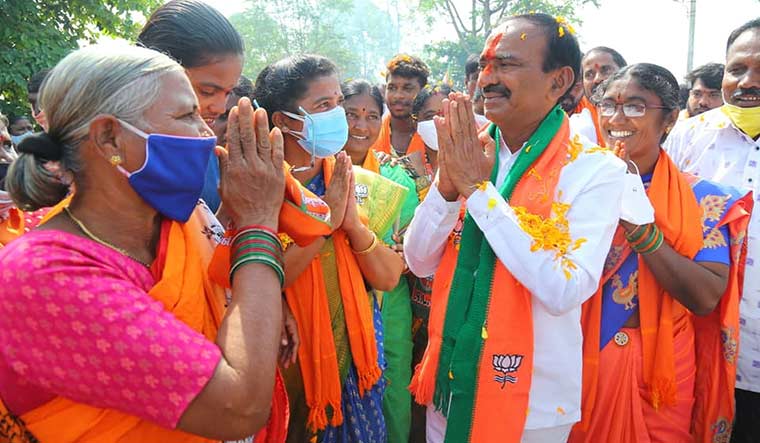 The BJP will apply this messaging to target the Telangana Rashtra Samithi, the YSR Congress in Andhra Pradesh, the DMK in Tamil Nadu, and the Janata Dal (Secular) and the Congress in Karnataka.

Another strategy would be to focus on the Hindu nationalism that comes with invoking local religious symbols and highlighting the atrocities of Muslim invaders. At the Telangana meeting, the BJP had put up replicas of the Golconda Fort, the Kakatiya Toranas (stone arches) and the Ramappa Temple, which was made a UNESCO world heritage site last year. The Golconda Fort replica had a BJP flag on top and a picture of Bharat Mata in front. An exhibition also highlighted the “atrocities” of the Razakars—a militia that supported the Nizam—before Hyderabad was merged with India. The issue still resonates with a section of the populace, especially in rural Telangana. Some leaders also flagged the rise of Muslim fundamentalist organisations in the south.

There was also a pilot project, which Modi wants replicated in other states. Senior party leaders were called to Hyderabad two days ahead of the meeting. They were deputed to go to 119 assembly constituencies, spend two nights there and engage with local communities, party workers and intellectuals to make the party’s presence felt. In Hyderabad, a melting pot of cultures, ministers and leaders were asked to attend conventions organised for 14 communities that came from elsewhere but are now settled here. Modi also referred to Hyderabad as Bhagyanagar, drawing on its Hindu origins, and asked that this organisational penetration be extended and consolidated.

“The countdown of the state government has started. We had won bypolls in Dubbaka and Huzurabad, and even performed well in the Greater Hyderabad area,” said BJP national secretary and in-charge of party affairs in Telangana Tarun Chugh. “It is a sign of things to come. The sentiment is with the BJP. We will highlight the corruption and the dynastic politics of Chief Minister K. Chandrashekar Rao’s party.”

The TRS has been ruling for 10 years, and the BJP wants to exploit any anti-incumbency there. Said Union Culture Minister G. Kishan Reddy: “It is a kitchen cabinet. KCR, his son and daughter hold their meetings around the dinner table. AIMIM chief Asaduddin Owaisi has direct access to their home. He can ride his motorcycle there.”

In Andhra Pradesh, the Jagan Mohan Reddy government is seen as a BJP ally, but only at the national level; it has supported the Modi government on key legislations and even the presidential election. “There are no friendly parties,” said state party president Somu Veerraju. “We contest against YSR Congress. It is a corrupt and family-oriented party. We will take Modi’s message to the grassroots and employ the strategy discussed in the national executive meeting. We are aiming for the entire south.” 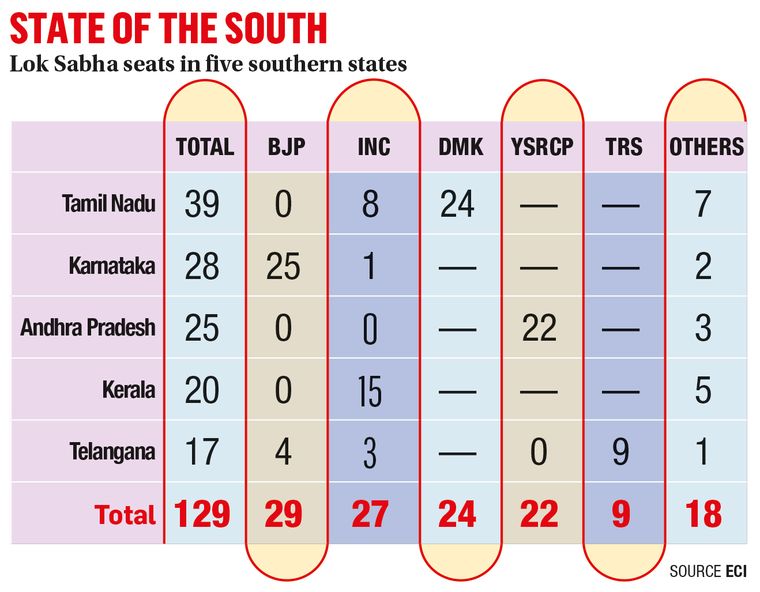 But before all that, the BJP has to ensure that it retains Karnataka, which goes to the polls next year. Party sources said the Congress and the JD(S) were in contention there, even though the latter supported the NDA candidate for president. “If [the BJP] does well, that can have an impact on the Telangana elections, scheduled to be held in December 2023,” said a source.

Party general secretary and Karnataka MLA C.T. Ravi, however, said that BJP would easily win the state, echoing Shah’s earlier statement that it would get 150 seats there. The state had faced uncertainty when Basavaraj Bommai was brought in as the chief minister last July. It took a while before Bommai was seen as the one leading the party into the next elections. But with controversies like the hijab row and the anti-conversion law, his government took a distinct hindutva line, in consonance with the party’s larger goal.

Ravi, who is also in charge of Tamil Nadu, argued that the BJP was growing there as well. The party has piggybacked on the AIADMK, but the latter is now witnessing a power tussle between leaders E. Palaniswami and O. Panneerselvam. “Where is there no struggle? Even the Congress is seeing a struggle,” said Ravi, dismissing the battle over control of the AIADMK.

The BJP had played a key role in AIADMK affairs after J. Jayalalithaa’s death. It helped Palaniswami become chief minister, and Panneerselvam was made his deputy. “A strong BJP, with power at the Centre, can still choose to bless various factions and bring them to a truce,” said a party leader, adding that, officially, the party has a hands-off approach.

The BJP’s foray into Tamil Nadu has been stonewalled because it is seen as a Hindi-speaking party. But after the previous state elections—the first in the absence of M. Karunanidhi and Jayalalithaa—the BJP sees an opening, and has changed its messaging: it will no longer question the Dravidian ideology, but will instead link it to a Hindu identity. “It was the British who created this schism, saying that Aryans were outsiders and Dravidians were locals,” said Ravi. “The theory of raiding Aryans has been proved wrong. Dravidians are about local traditions and culture. They are staunch Hindus. They are religious. We will win in the state.”

Of all the states in the country, the BJP wants Kerala the most; it would be an ideological victory. The state features in most of the BJP’s resolutions, and the party’s cadre faces more violence in Kerala than in any other state.

The BJP’s strategy there is to achieve a larger consolidation of the Hindu vote, says party national secretary Y. Satya Kumar, who was in-charge of the 2019 Lok Sabha elections there. “More than 45 per cent of the votes in Kerala belong to minorities, including Christians and Muslims. Our focus is on the rest,” he said.

BJP state president K. Surendran admitted that Kerala’s demography prevented his party’s growth. “Moreover, in seats where the BJP has a chance, the UDF and the LDF transfer their votes to each other to stop us. This is an issue we have to handle, and chalk out a strategy. The BJP will come forward and get the people’s confidence.”

Within the Hindu population, Surendran and Kumar said the key Ezavaha community supported the LDF, while the Nairs supported the UDF. “We discussed how to improve our mass base in the state,” said Surendran. “That was the main concern in this meeting. Also, the atrocities against the BJP and the RSS workers in Kerala, especially from CPI(M) and PFI (Popular Front of India) workers. We will formulate our strategy in the next few weeks.”

The party is also eyeing a new constituency. “The BJP is trying to improve its ties with the Christian population in the state, which is facing trouble from the PFI. The community feels that there should be a larger coordination with the BJP,” added Surendran.

Currently, the BJP is targeting the ruling Pinarayi Vijayan government for alleged corruption and for dynastic politics—Vijayan’s son-in-law is a minister. But the BJP hits a wall when it tries to claim the Hindu party space. “The CPI(M) plays cultural politics. It is a Hindu party as it moderates its messaging for the Hindu community,” said Surendran.

As to the larger message from the national executive, BJP spokesperson Shazia Ilmi said that Modi clearly stressed that India cannot progress until everyone is together. “He said we look at numbers and caste figures, and we put the entire Muslim community together. Instead, let us look at Pasmanda (backward) Muslims. They have got nothing from anywhere. It is time we focus on and see what can be done. The Prime Minister is changing the terminology of politics. He talked about Sneh Yatra (Journey Of Love). That is what we need. Let us look at people with love and affection. We stand for sabka saath, sabka vikas.”