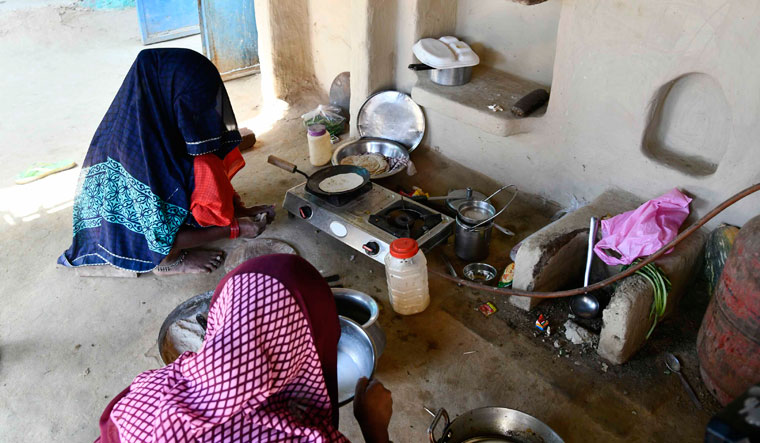 In one of the three rooms of her house, a dazed mother sits on the floor, her pallu pulled over her head. It has been more than a week since her 19-year-old daughter succumbed to injuries after being allegedly gang-raped and brutally tortured some 700 metres from her house in Boolgadi village of Hathras district in Uttar Pradesh.

The stream of enraged, solicitous visitors—including politicians, reporters, activists, neighbours, district officials, protesters, policemen and investigators—has left her slightly immobilised. She sits with her hand on her head. The need to stitch a consistent narrative around her daughter’s assault has become more than urgent. There is no time to grieve a terrible loss from a horrific crime. Or even erase disturbing wounds from her memory. Because the mother was the first to see her daughter lying stripped, paralysed and maimed amid tall stalks of bajra (millet). Because the mother made desperate attempts to file a first information report, and seek medical treatment from one general hospital after another, even as her daughter flitted in and out of consciousness. Because she fed her biscuits and juice even as the daughter struggled to record her statement and name her assailants from her hospital bed. Because state authorities hastily cremated her daughter on September 30, in the secrecy of the night, without her consent. Because hers is a Valmiki family in a Thakur-majority village and years of accumulated anger over constant subordination can only end in nyay (justice).

So, for the sake of an elusive nyay, the mother once again recounts the harrowing details when a political leader from Delhi comes calling on a Tuesday morning. She remembers how she panicked upon finding a single slipper of her daughter lying in the bajra fields, how when she peeked further in she found blood oozing from her daughter’s face, eyes and tongue. “Her spine was broken,” she says, letting out a long, deep wail. She recalls how she quickly covered her daughter’s body with her blood-soaked clothes and rushed to the local police station with her family members. And how the police made them wait even as blood kept dripping from her daughter’s body, how there was disdain on the faces of the policewomen, how she never got any written documents or medical slips, how she was not allowed inside the hospital room when her daughter recorded her statement. At one point, the mother loses her cool. “I am being made to answer the same questions again and again,” she says, before breaking into a searing lament. A group of women huddle around her with words intended to placate: “Calm down. They have only come for you.”

Round and round we have circled back to yet another horrific assault onÅÅwomanhood that has triggered national outrage and tapped into a collective grievance. The 2012 Nirbhaya case in Delhi, the 2014 Badaun gang-rape and murder case, the death of an eight-year-old in Kathua in 2018. Or the rape case of Unnao, where the victim was set ablaze on her way to a court hearing last year. Around the same time, the four accused in the gang-rape and murder of a 26-year-old veterinary doctor near Hyderabad died in an “encounter”. The cycle—a group of men asserting power against and instilling fear in a single woman in a deeply hierarchical society—recurs in the same framework with sensational plot twists and rumblings of state apathy. The 24x7 news cycle seems to become sword and shield. 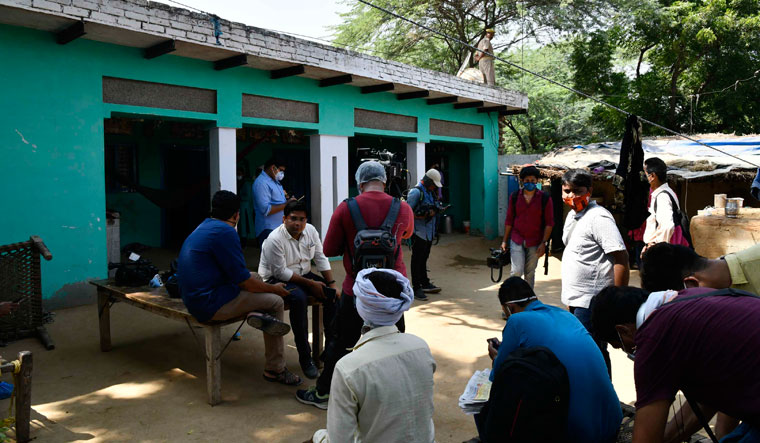 Says one of the four siblings of the Hathras victim, “There is a lot of attention from the media now. So we have enough police protection. But once the media is gone, that is when we will need all the protection. I fear for my mother, father and sister-in-law, who might end up suffering a similar fate like my sister.”

The brother’s anxiety might remind one of the reports of District Magistrate Praveen Laxkar allegedly issuing veiled threats to the family. He had reportedly nudged them to support the government’s statement, reminding them that the media would soon leave.

The brother vividly remembers the day, September 29, his sister died in Delhi’s Safdarjung Hospital. She was brought there from the Aligarh Muslim University medical college. “It was around 11pm that we asked if the postmortem examination had been completed,” he says. “Some said the body had left the hospital, others said it was kept safe. We were being led astray. I do not know how they cremated her body without our permission; I do not know if they used kerosene or petrol or oil. We had said we would cremate her body with all the rituals in the morning. They did not listen to us one bit.” He keeps repeating the last line as his mother continues to recall more grisly details to gasps of surprise and horror from her listeners.

Outside this small room, packed mostly with women in masks, there is a melee of male callers around the victim’s elder brother in the courtyard. A neat little segregation of the sexes has organically taken place. There, the victim’s sister-in-law quietly heats milk and tosses chapatis on a clay stove, clutching her pallu. “That day, on September 14, my sister-in-law woke up at dawn, made todi ki sabzi (ridge gourd), kneaded dough and left for the fields to cut grass. In fact, she woke up at the crack of dawn every day and took care of all the household chores. When I gave birth to a girl this August, she stepped in to take care of the house. My children were so fond of her. They never cried in her presence,” recalls the sister-in-law, before drifting off in her thoughts. “If only she had studied or gone to school, this would not have happened. We will not stop repeating ourselves until the truth comes out.” 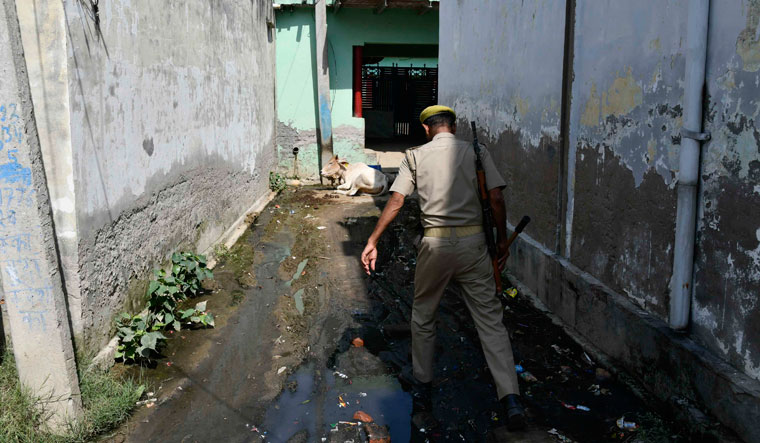 Keeping watch: A policeman patrols a lane near the victim’s house | Sanjay Ahlawat

The family and neighbours deny any acrimony with members of the dominant Thakur caste. The five Valmiki (dalit) families live quietly, mind their own affairs and eat the labour of their hands, working on the farms of upper-caste men.

“We are Thakurs, they are Harijans. How can we talk to them? We hardly have any interaction,” lashes out 65-year-old Rajwanti, the mother of Ramkumar, one of the four accused. She stays some 200m away from the victim’s home. “I understand the grief of a mother in the circumstances, regardless of caste, but how did my innocent son get stuck in this? Her mother could have shouted and raised an alarm just when she saw her daughter missing in the fields that day. She just went on cutting grass? Why did she not shout? If I was in her place, I would have raised hell. She did not do anything.” Rajwanti demands a proper investigation that would establish her 27-year-old son’s whereabouts on the day of the crime.

The plight of the dalits is illustrated through the words of Charan Singh, chairman of the NGO Bharat Vasi Seva Sansthan, set up to handle issues of labour uplift in the dalit community. “Since the BJP government came to power in the state, NGOs like ours hardly get to do any work,” he says. “We are mostly keeping busy doing farm work. Our licence is not getting renewed.”

Amid all this, an upper-caste Pandit neighbour sits outside his house in the afternoon heat, wearing a blank expression. He just wants to be left alone, and calls the matter a Valmiki-Thakur dispute. He complains how, since his village came into the spotlight, all farm work has stopped. There are no songs or serials on the television. Just this one news. “I do not understand this circus,” he says. “Aren’t the accounts of a grieving mother and her dead daughter enough to end this?”