Will not allow implementation of the bills 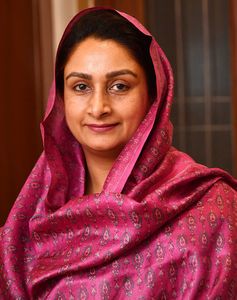 HARSIMRAT KAUR BADAL quit the Union cabinet protesting that the farm reform bills were against farmers. The Shiromani Akali Dal, her party, has been part of the National Democratic Alliance since its inception, and had been the first to support Narendra Modi’s candidacy for prime minister. However, the Akalis could not lend their support to Modi this time as the party’s vote bank is largely made up of the Sikh peasantry.

In an exclusive interview, Badal explains the factors behind her resignation, and the way forward for her party.

Q\ Why did you resign from the Union cabinet?

A\ My party and I are opposed to the three agriculture-related bills which are against farmers. When I could not convince the government, and the bills were going to be passed in the Lok Sabha, I had no option but to oppose the bills. So, I resigned as a minister and opposed the passing of the anti-farmer bills.

The SAD raised the need to address the apprehensions of farmers through all possible means. First, I raised it while giving my comments during the inter-ministerial consultations before ordinance came to the cabinet. I again expressed my apprehension in the cabinet meeting when it was tabled for discussion. After the ordinances were promulgated, the SAD took up the issue with the BJP top leadership. However, when the NDA government refused to address the matter, I did not have any option but to resign from my post and prepare to battle alongside farmers.

Q\Other Union ministers say you were present in the cabinet when the bills were approved.

A\ I have never claimed not being present. Before, during and after the promulgation of the ordinances I continuously raised objections about the bills, and urged the government to address these apprehensions before bringing the bills. I tried for more than two months to make the government agree to critical changes for making the bills beneficial to farmers, but I could not convince them.

Q\The government claims the bills are for farmers’ benefit.

A\ The cumulative impact of the three legislations will create serious problems. It is going to ruin agriculture of Punjab.

Once the private players get established the state procurement system will first get weakened, and finally [will become] irrelevant. The state mandis and the infrastructure created to procure food grains, which has been established painstakingly over a period of 50 years, will be destroyed.

Q\The SAD has been the oldest BJP ally. Will both parties continue their alliance in Punjab?

A\ This is a call which the party leadership will take collectively. We will discuss the issue with the party cadre as well as block and district level units before taking a final call on this.

Q\What is your party’s future course of action on the farm reform bills?

A\ We stand firmly and strongly with the farmers. We will make sure that the anti-farmer bills are not implemented in Punjab. All efforts will be made to stop the implementation of these bills. Akali Dal is a party of warriors. We will lead the fight…. The party has already drawn an action plan to ensure that the voice of annadaata [farmer] is heard by the nation and its government. We have announced a chakka jam (stop the wheels) on September 24, and will hold a kisan march to Mohali on October 1, to hand over to the governor a memorandum for the president, from Sri Akal Takht, Sri Damdama Sahib and Sri Kesgarh Sahib. We will not rest till justice is done to the farmers.