In first, the Army deploys riflewomen near LoC to check drugs and arms smuggling 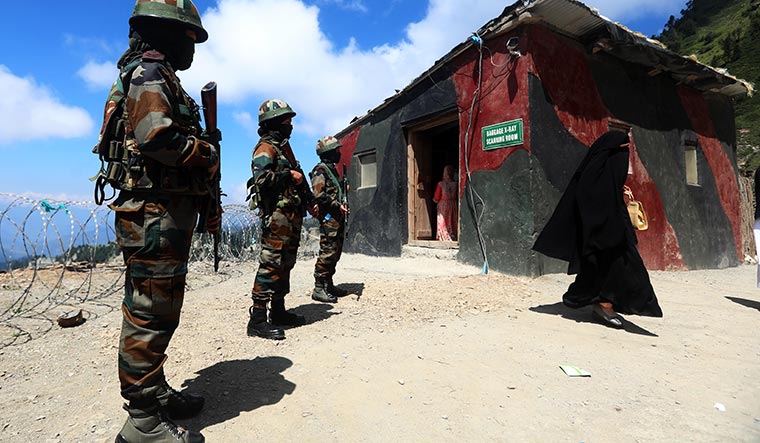 On duty: Riflewomen deployed at the sadhna pass checkpoint near the loc | umer asif

AN INSAS RIFLE strapped to her shoulder, T. Lian Khan Ching is clad in military camouflage with a bulletproof vest, helmet, ankle-high service boots and a scarf that doubles as a face mask. Only her eyes are visible. And, they seldom stay still, darting from one woman or child to another as they disembark from vehicles for a security check at Sadhna Pass in Kashmir’s Kupwara district. Ching is part of an all-woman platoon from Assam Rifles deployed by the Army at the strategic Sadhna Pass since July 25. The purpose is to deter smugglers from using women and children to sneak in arms and narcotics into Kashmir from across the Line of Control. Prior to the platoon’s posting, women and children were exempted from security checks. This is the first time the Army has deployed women soldiers near the LoC in Kashmir.

Sadhna Pass lies 150km northwest of Srinagar. Located 10,000ft above sea level, it is surrounded by the LoC on three sides and connects one lakh residents of Tangdhar-Teetwal villages with the rest of the Valley. Locally, Sadhna Pass is called Nathi Chapa Gali or the pass that leaves one’s nose numb owing to the icy cold winds during winter; 20ft snow blankets the pass in winters when the temperature drops to -25⁰C. After the 1965 war, when Bollywood superstar Sadhna visited the pass to boost the morale of the troops, it came to be known as Sadhna Pass. Black-and-white photographs of the film star adorn the walls of the meeting hall at the pass alongside photos from the 1965 war and of soldiers in action against tribals from Pakistan who tried to annex Kashmir in 1947. There are also photos of India’s first defence minister Baldev Singh interacting with troops at the pass and at Teetwal after the tribals were pushed back.

Most of the nine riflewomen in the platoon hail from the northeast. Deployment near LoC comes with its own set of challenges—Pakistani artillery shelling, inclement weather, inhospitable terrain, minimum amenities and no recreation except watching television. But they have taken it all on the chin.

On August 7, they had their first brush with shelling from Pakistan that killed one civilian and injured six others at Tangdhar. As soon as they heard the shelling, Ching and three others of her platoon—all members are in their 20s—rushed to the underground bunker some distance away from the check-post. “We stayed in the bunker for some time and then resumed our duty,” said Ching, who is from Nagaland. The shelling did not scare her, she said. “This is part of our job and that is what we have been trained for,” she said. She struggles with Hindi but is fluent in English. She applied for a job in the Army with four of her childhood friends, but only she got in. The opportunity to serve near the LoC has been a thrilling experience for her. “I tell myself, beyond those mountains is Pakistan,” she said.

Riflewoman Mevish Rongmei from Manipur has been serving in the Army for three years. “But this is the best experience to date,” she said. Her father, also in the Army, inspired her to don the olive greens. While the local people are cooperative, she said they had trouble understanding her Hindi at times. Joining the Army was L. Khongsai’s childhood dream. Her brother is in the Border Security Force, and that made it easier for her to join the Army after class 12, said Khongsai, also from Manipur. The platoon is led by Captain Gursimran Kaur of the Army Service Corps. She regularly interacts with the soldiers and also acts as a guide. To unwind, the soldiers watch television or surf the internet on cellphone. Sadhna Pass has good internet connectivity, thanks to a mobile network line close by.

A senior Army officer said the women soldiers adapted well to the situation near the LoC. More washrooms were made available in view of their deployment, he said. The platoon’s deployment, he added, had helped curb the use of women and children to smuggle arms and narcotics. They had also addressed “the gender sensitivity concerns of the female travellers,” the officer said.

A day after the deployment of the platoon—on July 26—10kg of brown sugar, an AK-47 rifle, two pistols, 20 grenades and other ammunition were recovered from three persons who were travelling in two vehicles.

An Army officer said that the narcotics and arms were seized during a routine checking of vehicles at night. He said the riflewomen work in shifts of three hours, from 6am to 9pm. “After that, all the checking is done by male soldiers,” he said. The presence of riflewomen seemed to have put pressure on the smugglers, he said, and that is why they were trying to smuggle drugs and weapons at night when women and children seldom travel.

Before deciding to post the women platoon at the pass, there were suggestions to deploy a contingent of policewomen at the check-post. However, the Army decided to bring in women soldiers, till the time the 100 women it plans to induct in the Military Police complete their training.

The women soldiers, meanwhile, are on watch. But guess what they are looking forward to? Snowfall in November. Said Rongmei: “It is going to be fun to witness snowfall here.”