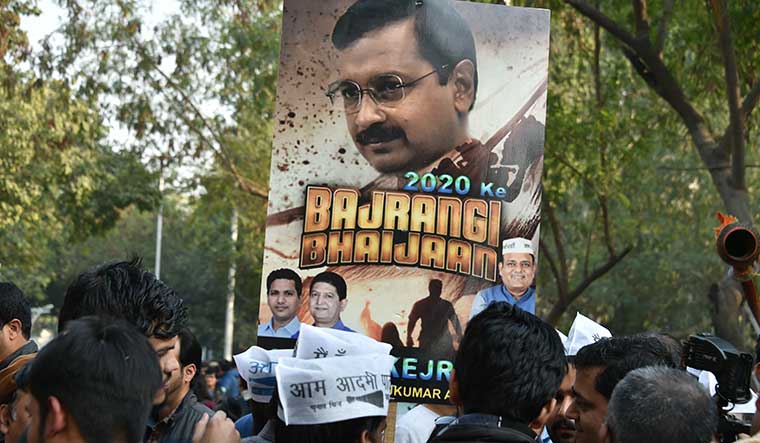 Aaj mangalwar hai (Today is Tuesday),” said Arvind Kejriwal, pausing for effect. The sea of Aam Aadmi Party volunteers, who had eagerly gathered to hear him after the results of the assembly elections in Delhi were announced, pounced on the cue and cheered wildly. “Hanuman ji ka din hai (It is Lord Hanuman’s day),” Kejriwal continued. He thanked the deity for the poll outcome.

The reference to Hanuman was apt. After all, he did help the Delhi chief minister in blunting the attacks of a belligerent BJP that sought to label him as anti-Hindu in the context of the anti-Citizenship (Amendment) Act protests. A visibly hurt Kejriwal had defended himself saying, on television, that he was a Hanuman bhakt. Asked if he knew Hanuman chalisa, he also recited the hymn.

Aligning himself with Hanuman aided Kejriwal in a fierce election campaign that had the BJP, led by Union Home Minister Amit Shah, seeking to project him as a benefactor of the “anti-national, anti-Hindu” elements leading the anti-CAA protests at Shaheen Bagh. “It happened purely by chance,” said a close aide of Kejriwal. “The TV anchor asked Kejriwal if he knew Hanuman chalisa, and he did know it by heart. He turned it into an opportunity.”

On the ground, too, Hanuman resonated, with AAP volunteers responding to BJP workers’ cries of ‘Jai Shri Ram’ with ‘Bajrang Bali Ki Jai’. But the other elements of the AAP’s election strategy were not by chance. They were planned meticulously and executed with finesse. The party matched the BJP, move for move, strategy for strategy.

According to AAP leaders, the preparation for the assembly elections began right after the Lok Sabha polls, in which the party drew a blank and ended up third in six of seven seats in Delhi. In fact, when the BJP launched its campaign in December, the AAP had already completed two phases of voter outreach.

Surveys showed that the approval ratings of Kejriwal and the AAP government were as high as 88 per cent. Drawing from this, the party crafted a campaign focusing on the Kejriwal government’s work and on the man himself. By the end of November, Prashant Kishor’s Indian Political Action Committee (I-PAC) was hired for designing the campaign using a more scientific and professional approach.

Less than two months before the polls, the AAP stepped up the campaign with door-to-door visits focusing on the five-year report card of the Kejriwal government. This was inspired by survey findings that showed a high level of satisfaction with the government’s performance. “We went to the people with our report card, which [had details of] work done in the fields of electricity, water supply, education and health care,” said senior AAP leader Sanjay Singh. “The people recognised the change that the government’s work had brought in their lives.”

The message focused on the welfare measures of the government, including cheap electricity and water supply, free travel for women in public transport, free pilgrimage for the elderly, and reforms in education and health care. It also relied on Brand Kejriwal. The party sent volunteers to 3.5 million households with its report card. Seven town hall meetings of Kejriwal and 700 smaller meetings to be addressed by the MLAs were chalked out.

The grassroots sentiment in favour of Kejriwal’s reelection also inspired the slogan ‘Lage Raho Kejriwal’. “His personal popularity continues to be very high,” said Ashish Talwar, Kejriwal’s long-time associate. “People say he is our man. The manner in which people claim ownership of Kejriwal is phenomenal.”

In the next stage of the campaign, the AAP unveiled ten commitments, dubbed ‘Kejriwal’s Guarantee Card’, and it became the basis of yet another round of door-to-door visits. Another initiative, carried out behind the scenes, involved Kejriwal personally writing to 15,000 grassroots influencers, such as teachers, doctors and social workers, to spread the party’s message.

Then came the most challenging part of the campaign. The BJP, which had tried and failed to find fault with the AAP government’s performance, laid the Shaheen Bagh trap for Kejriwal, baiting him with questions on where he stood on the anti-CAA protests, accusing him of supporting “anti-national forces”, questioning his Hinduness, and even terming him a terrorist.

Kejriwal, who had steadfastly stuck to local issues, refused to take the bait. Instead, he asked Shah why it was taking him so long to clear the protest site if he was such a powerful home minister. And, he turned the terrorist jibe into a campaign tool. A visibly hurt Kejriwal asked whether someone who had put his life on the line for the people, by sitting on dharnas despite suffering from diabetes, could be called a terrorist. And the party backed him by launching yet another door-to-door campaign on the issue.

The AAP also exploited a huge chink in the BJP’s campaign armour; it dared the BJP to identify its chief ministerial face. “Think: what if Amit Shah decides after the elections to make Sambit Patra or Anurag Thakur the chief minister,” Kejriwal said in his public meetings.

Those who worked with Kejriwal say that he performed flawlessly as the AAP’s election mascot throughout the campaign. “It was a pleasure to work with Kejriwal,” said Rishi Raj Singh, cofounder and director of I-PAC. “He is a master strategist and a master communicator. He was always open to ideas and brought tremendous political canniness to the table.”

Last came the challenge of matching the BJP’s fabled booth management. In concert with I-PAC, the AAP set up a credible ground-level structure, comprising 67,815 booth-level mobilisers, a central room and 70 war rooms, to keep a tab on the voting. The ground report after the polls was that the party would bag more than 61 of 70 seats. It finally won 62, just five fewer than its stunning tally of 67 seats in the previous polls.

The poll outcome left the BJP with one consolation. It improved its vote share by around six percentage points. The Congress, however, was reduced to a mere footnote, drawing a blank yet again and winning just about 4 per cent of votes.