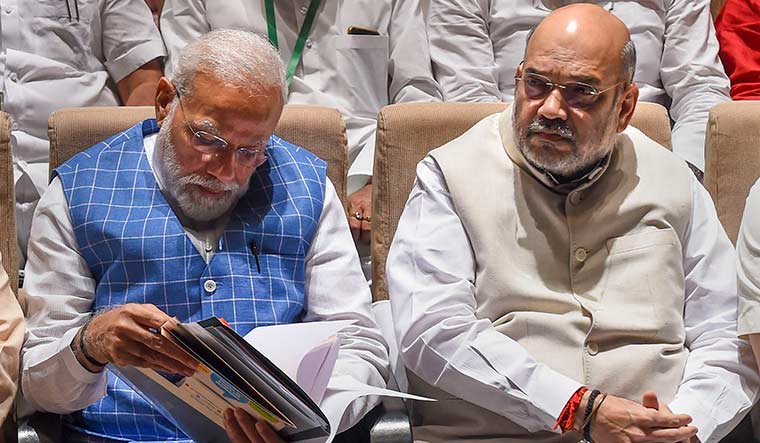 Searching for answers: The AAP tackled the BJP’s polarising campaign led by Modi and Shah by keeping itself ideologically neutral | PTI

In March 2018, when the BJP swept the assembly elections in Tripura, decimating the two-decade-old Manik Sarkar government, the party labelled it a big ideological victory. Since then, the saffron party has failed to win absolute majority in any of the assembly elections it contested. The party, in fact, lost five states where it was in power.

The Aam Aadmi Party’s stunning victory in Delhi has further demonstrated the limitations of the BJP’s ideological appeal. “The local leadership issue is a factor as elections become more leader-centric,” said a BJP general secretary. This worked for Narendra Modi when he was chief minister of Gujarat and it has been working for him in the Lok Sabha elections as well.

Could the BJP have won Delhi had it focused on development, and not so much on national and ideological issues? Union Home Minister Amit Shah was in charge of the party’s campaign and he turned it into a prestige battle over the Citizenship (Amendment) Act, which was helmed by him. It became the focal point of the BJP’s campaign, with senior leaders like Uttar Pradesh Chief Minister Yogi Adityanath, Union Minister Anurag Thakur and Lok Sabha MP Parvesh Verma joining Shah with their incendiary statements, giving it a distinct hindutva tinge. The BJP brought in heavy artillery—members of the Union cabinet, over 200 MPs and several sitting and former chief ministers campaigned non-stop across 70 assembly seats.

But the narrative failed to translate into seats.

“Nationalism was part of our campaign when we won two seats in 1982 and when we won 303 seats in 2019,” said a Union minister, stressing that the party could not have given up its ideological messaging. Before the elections were announced, several reports—including a few from intelligence sources—had indicated that the AAP could coast to victory as the BJP did not have a credible face or an issue to beat Chief Minister Arvind Kejriwal’s appeal, enhanced, of course, by freebies distributed liberally.

The BJP tried to fight back by taking steps to regularise illegal colonies benefiting over 40 lakh residents. Modi, in fact, cleared the move within minutes of Union Minister Hardeep Singh Puri presenting him the draft. But the party soon realised that the only way it could wean voters away from the AAP was by creating an alternate narrative dominated by ideological issues, as development alone does not deliver—a lesson it learned from assembly polls in Haryana, Jharkhand, Madhya Pradesh, Rajasthan and Chhattisgarh.

The AAP, however, played a smart game by keeping itself ideologically neutral. Kejriwal recited Hanuman chalisa and reminded the voters about his free pilgrimage plan for senior citizens and his support for the Modi government’s Kashmir policy. Many BJP leaders felt this showed the success of the saffron party’s ideological push—to take on the BJP, its rivals had to align themselves with issues relevant to Hindus, like Rahul Gandhi did in Gujarat, Kamal Nath in Madhya Pradesh and Bhupinder Singh Hooda in Haryana. They argue that had the BJP not focused on ideological issues, it would not have polled 38.5 per cent of the votes in Delhi—a jump of 5 per cent from 2015—and could have failed to enthuse its core voters. This is the second highest vote share for the BJP in Delhi after the 47 per cent it polled in 1993 under the leadership of Madan Lal Khurana.

“Opposing the BJP does not mean opposing Hindus. It is a political fight that will continue,” said RSS general secretary Suresh ‘Bhaiyyaji’ Joshi a day before the Delhi results came out. His statement assumes significance as it has become clear that the BJP’s extensive focus on ideological issues united the Muslim community, which voted en masse for the AAP, while Hindu votes were divided. The RSS wants to keep Hindu issues alive and keep it separate from the electoral fortunes of the BJP.

For the BJP, the effort now will be to recalibrate its messaging on ideological issues like the CAA as these are no longer limited to Muslims. Several dalit leaders have joined anti-government protests and it could take away a key chunk of BJP voters. Also, the party may have to nurture local leaders as Modi’s appeal is increasingly getting limited to national elections. It is the reason why the BJP is bringing back Babulal Marandi, its tribal leader in Jharkhand, after 14 years. The BJP’s ideological push may have worked in bringing the aspirations of the majority community to the forefront, but it has suffered reverses in places where dominant communities felt left out of the political power structure.

Delhi BJP president Manoj Tiwari has assumed responsibility for the loss and has offered to resign. But under the Modi-Shah regime, the party has never conducted any formal exercise to pin blame on any leader for electoral debacles. The BJP, however, knows that its tried and tested election template, which involves harnessing Modi’s appeal, raising ideological issues, promising development and poaching leaders from other parties has hit a major roadblock.

The BJP could learn from its loss in Delhi as it prepares for the upcoming Bihar elections, where the party is in an alliance with Nitish Kumar’s Janata Dal (United) and Ram Vilas Paswan’s Lok Janshakti Party. Bihar has been witnessing protests against the CAA and the National Register of Indian Citizens. Although Nitish has expressed his opposition to the NRIC and the CAA, the BJP says it will contest the assembly polls under his leadership. After a series of devastating defeats, the party can ill afford to lose yet another state elections.