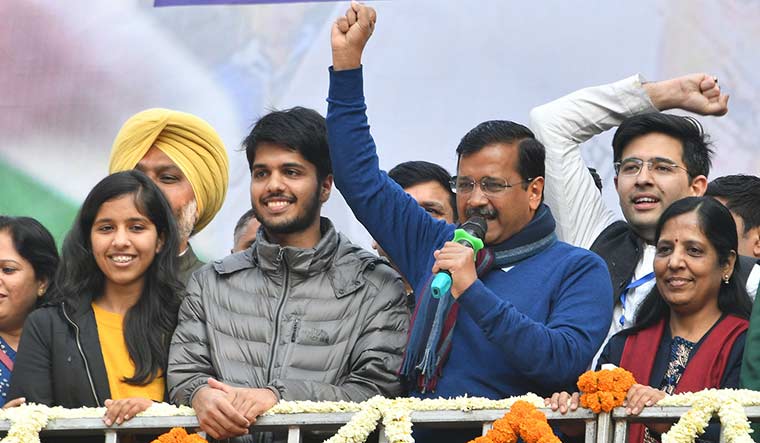 Family man: Arvind Kejriwal with wife, Sunita, and children, Harshita and Pulkit, at the the party office in Delhi | Arvind Jain

Soon after the results of the Delhi assembly elections were declared, Arvind Kejriwal had his wife, Sunita, by his side on the makeshift stage erected on the terrace of the Aam Aadmi Party headquarters. The chief minister thanked the huge crowd of party volunteers for their contribution to the stupendous victory. With an impish grin, he added that it was also his wife’s birthday that day.

The volunteers promptly demanded cake, and Kejriwal said, “I had the cake. There will be more cake for you.” A while ago at the party office, as the trends on television showed that the jhadoo (broom, AAP’s election symbol) had yet again swept Delhi, a cake was brought in to celebrate Sunita’s 54th birthday.

The scenes were reminiscent of 2015, when the AAP had won 67 of 70 seats in Delhi. The first tweet from an elated Kejriwal then was: “Thank u Sunita for always being there.” He had pulled a somewhat hesitant Sunita to the front as the party celebrated, introducing her to the nation. “This is my wife,” he said. “She would never come to the front. She was always afraid that the government would act against her. Today, I told her, now there is no reason to be afraid. Nobody will take action against you.” Sunita was then posted as commissioner of income tax in the Income Tax Appellate Tribunal, and she feared that action could be taken against her as she was a serving officer of the Indian Revenue Service (IRS).

However, there is a marked difference in Sunita now. Sporting a white AAP cap and a scarf with the party’s colours, she hit the campaign trail in Kejriwal’s constituency, New Delhi, along with their two children, Harshita and Pulkit. She was no longer bound by rules of government service—she took voluntary retirement in 2016.

Out campaigning, Sunita would knock on doors and introduce herself, only to be told many a time that they knew who she was. She would hand out the government’s ‘report card’ of the work done in the last five years and exhort people to vote for the AAP. If people had any complaints, a member from her team would note them down diligently while she tried to assuage the concerns with kind words and a smile. Petite, unassuming and with a pleasing demeanour, Sunita brought a certain next-door-neighbour familiarity to the campaign. The ‘Aam Aurat’ is now unafraid of the public glare as she bats for the ‘Aam Aadmi’.

The response she got from the people, said Sunita, was a great source of confidence. People, she said, would tell her that there was no need for her to campaign as they had made up their minds to vote for the AAP. “The five years were very challenging, and Arvind faced the challenges with a lot of determination,” she said. “The people of Delhi have seen how he has fought for them.”

But there were certain lows during the campaign, too, like when BJP MP Parvesh Verma called Kejriwal a “terrorist”. It was disheartening to hear such allegations, said Sunita. “It was an extremely challenging campaign. If there was agenda politics on the one hand, there was politics of work on the other. There was definitely some anxiety because of the campaign run by the BJP,” she said.

If earlier, she made a rare public appearance bringing home-cooked food for Kejriwal as he sat on a dharna at Rajpath during his first term as chief minister in 2013, she is more visible and vocal now. When Kejriwal sat on a dharna with his cabinet colleagues at Lieutenant Governor Anil Baijal’s house in June 2018, demanding an end to the strike by government officers and clearance to the AAP regime’s project for doorstep delivery of services, Sunita tweeted that she was not being allowed to meet her husband. She posted a photograph of herself with Kejriwal’s mother and the wives of deputy chief minister Manish Sisodia and health minister Satyendar Jain sitting in a car, and wrote, “Respected LG sir, are we four ladies, mother and wife of CM, wife of Dy CM and wife of Satyendar Jain threat to your security that you are not allowing us to enter the road leading to your house? Kindly intervene. Please do not feel so threatened by everyone.”

In November 2018, when a man threw chilli powder at Kejriwal at the secretariat, she lashed out at Delhi Police, tweeting, “Shame on such police, which is unable to protect its chief minister at the behest of the BJP. Children and family members of the same police force are benefiting from the efforts of the Delhi government in education and health sector.”

Sunita says that one of the first things that Kejriwal said to her when he proposed marriage to her in 1993, when they were at the Civil Service Academy in Mussoorie, was that social service was his passion and he wanted to know her views regarding it. They got married in 1994, and came to Delhi on deputation in 1995. She has been his constant pillar of support, be it when he quit his job in the IRS to launch his NGO Parivartan or when he hit the streets during the India Against Corruption movement. She ran the house, managing the finances, helping her children with studies and looking after Kejriwal’s elderly parents.

What worries Sunita the most is her husband’s health—he is diabetic. She said he might have got the disease because of the stress he endured as an activist. He was not keeping well in the last few days, too, she added. “He had a very hectic routine. But he was not in a state to say no to even a single meeting,” she said. “He did much more than his health would permit.”

Would she join politics? No, she said. “I do not discuss politics much. I do not interfere in any of the decisions taken by the AAP,” she said. “I only lend a helping hand to my husband. I am his support system.”