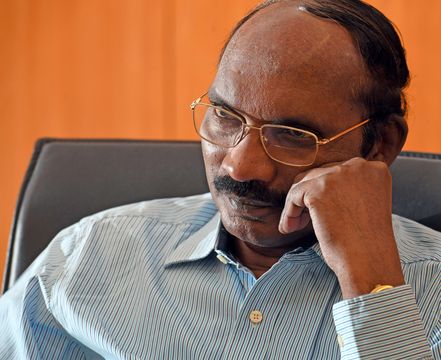 WITH INDIAN SPACE Research Organisation planning 28 launches in 2020, ISRO chairman K. Sivan has his hands full. Undeterred by failures, he and his colleagues are drawing lessons from Chandrayaan-2, which ended in September last year after a software glitch caused the lander Vikram to crash-land on the moon.

In an exclusive interview, Sivan talked to THE WEEK about the missions ahead. Chandrayaan-3 will reattempt a soft-landing on the moon next year; Gaganyaan, India’s first manned space mission, is on schedule; and Aditya L1, ISRO’s first mission to study the sun, will help scientists analyse the sun’s corona.

Q/ What are ISRO’s major projects and missions this year?

A/ The small satellite launch vehicle (GSAT-20) is the first development flight this year. GSAT-20 is a high-throughput satellite that will provide high bandwidth connectivity to rural and remote areas of the country, such as the northeast. It will also facilitate flight connectivity.

The other major project is the Aditya L1 mission. Then there is the launch of IDRSS (Indian Data Relay Satellite System). The work on Chandrayaan-3 is also going on; it should be launched in the next 16 months or so.

Q/ How is work on Gaganyaan progressing?

A/ It is progressing as per schedule. We have already designed the crew modules, where the astronauts are going to sit. The work on the service module, which will serve the crew module, is also over. The design part of the human rating of the launch vehicle is also over. Only the testing part is left.

Q/ Who are the four crew members selected for Gaganyaan? How many of them will finally go?

A/ Their identities are top secret. We do not want them to be approached by TV crews (laughs).

They are a mix of young and middle-aged people. They will be undergoing training in Russia for the next 11 to 15 months. We do not know how many members will finally go on the mission; we will come to know about it only later.

Q/ What is the timeline for Gaganyaan?

We would like to have a propulsion module that will take the lander and the rover to the earth’s orbit. It will again attempt a soft-landing on the moon’s south pole—the same area Chandrayaan-2 [had in sight], though the exact place is yet to be identified.

Q/ What went wrong with Chandrayaan-2?

A/ The powered landing failed. During the descent, the drop in velocity was more than what we wanted, and the dispersion was more than what was expected; the vehicle’s control system was not designed for it, and it ended in a hard-landing. We went through the flight data and analysed what really happened. Based on the data, corrective measures have been taken. There would be additional simulations to ensure that Chandrayaan-3 is a success.

Q/ Will Chandrayaan-3 have a different team?

A/ It will have the same team that worked on Chandrayaan-2. This team has the expertise for the mission, and we cannot lose their expertise. We would attempt this mission with corrections. We would take measures to ensure that all issues are addressed.

Q/ When is the Aditya L1 mission expected to be launched?

A/ Aditya L1 is slated for launch in the middle of this year. It will be going to a place called L1—Liberation point 1—between the sun and the earth. At this point, it will always face the sun and study the rays much better. It will mainly study the dynamics of the sun’s corona, as it has an impact on the earth’s climate.

Q/ Any space defence programmes on the lines of the US project?

A/ We are poor people; we are just not bothered about any space defence programme. We are focusing on domestic issues (laughs).