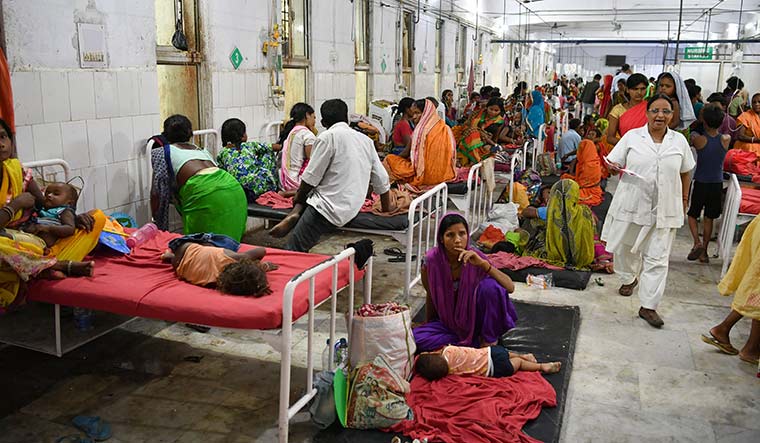 Space crunch: Patients and their relatives at the Sri Krishna Medical College and Hospital in Muzaffarpur | Arvind Jain

Muzaffarpur is on search mode, as is Harivanshpur village. While medical experts and bureaucrats are trying to find the elusive cause of a disease that has killed more than 100 children in the district in a few days, villagers from Harivanshpur are looking for their leaders and district officials. Posters announcing a reward of Rs15,000 and Rs8,000 for finding Ram Vilas Paswan, Union minister for consumer affairs, food and public distribution, and Pashupati Paras, Muzaffarpur MP, have come up at the village. “Seven kids have died in this village alone. Rest of the children have been packed off to neighbouring villages to protect them from chamki bukhar [local name for encephalitis],” says Rajesh Sahni, 35, whose daughter, Puja Kumari, all of four, died in the latest outbreak of Acute Encephalitis Syndrome (AES). “But, our leaders and officials have not come even once to ask about our condition.”

To an outsider, the AES-hit district of Muzaffarpur could seem dystopian. Sick children struck by a ‘mysterious’ brain disease land in the overcrowded, filthy and under-staffed ICU wards of the Sri Krishna Medical College and Hospital (SKMCH), ground zero of the current crisis. Heaps of garbage dot its premises. A persistent stench wafts through the airless corridors. Doctors and nurses rush in and out of the ICU, visibly stretched and unable to handle the constant rush of feeble, feverish and comatose bodies.

Outside the three paediatric ICUs, policemen stand guard, stalling the entry of pushy mediapersons. Inside the biggest one, there are two rows of several beds, with at least two children on each bed, their parents sprawled on the floor with their meagre belongings. Two ICUs have air-conditioning, but the largest one only has a couple of air coolers. A few steps away, the medical superintendent is at his wits’ end, trying to explain the latest scandal that has hit the hospital—the discovery of skeletal remains just behind the premises.

Nirmala Devi clenches her fists and her teeth and jerks her body to describe how Varsha, her four-year-old granddaughter, got the same kind of seizures that her son got 20 years ago. Other parents, some with children as young as six months, wonder how the child could have eaten the litchi fruit and fallen sick.

Meanwhile, doctors strain to provide a reasonable explanation for the sudden spate of deaths. “The disease is not new. It has been here since 1995,” says Dr Gopal Shankar Sahni, head of paediatrics at SKMCH. “And, it is not encephalitis; this is febrile encephalopathy. The so-called experts are not able to understand the distinction, and hence there is a lot of confusion.” 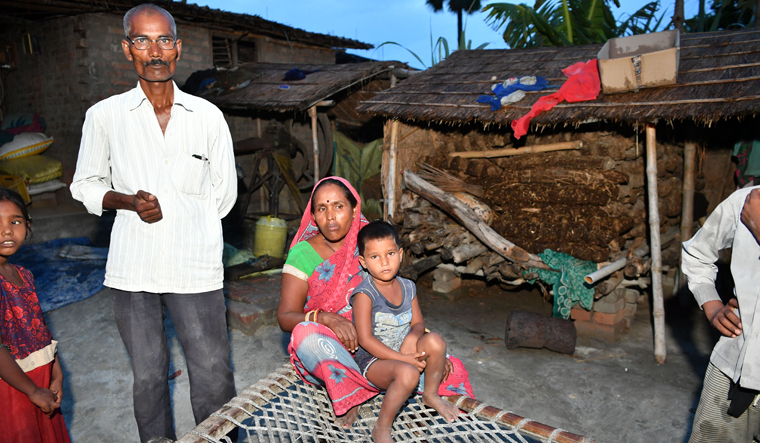 Close escape: Suresh Sahni with his wife and daughter, who had fever and seizure, at home in Harivanshpur village | Arvind Jain

Encephalitis is an inflammation in the brain caused by viruses, bacteria, fungus or parasites, whereas encephalopathy involves brain dysfunction owing to certain alterations in the body. “The symptoms we are seeing now include dehydration, hypo- and hyper-natremia [low and high sodium levels] and convulsions,” says Sahni. In an outbreak such as this, mortality is high, he says. In 2014, of the 700-odd cases, about 250 kids died at SKMCH; this time, it accounted for 111 of the 153 deaths across 20 districts in the state.

Sahni attributes the current spate of deaths to the high and “consistent” heat and humidity here. “Elsewhere in the country, the temperature goes down in the evening,” he says.

But, paediatrician Dr Arun Shah says that heat affects adults, too, and would have affected neighbouring areas. The state is in denial, he says, and so wants to fix the blame on “mother nature”. “The underlying problem is chronic malnutrition,” he says. The disease affects the poorest of the poor children, typically between the age of four to five years. “They have seizures, some may or may not have fever, and develop severe hypoglycaemia [very low blood sugar levels] in the early hours of the day,” he says. “Heat and humidity are, at best, only contributing factors.”

In 2012, on the invitation of the Bihar government, Dr T. Jacob John from CMC Vellore began investigating the matter. The following year, John says Dr Mukul Das of the Council of Scientific & Industrial Research-Indian Institute of Toxicology Research, Lucknow, Shah and he found the explanation. By 2016, they had them published in a journal, too. In 2017, the same explanation was published in The Lancet by a team of researchers from the National Centre for Disease Control, Delhi, and the US Centers for Disease Control and Prevention, he says. The trigger, the papers say, is the presence of methylenecyclopropyl-glycine (MCPG) toxin in litchis. Shah explains that after parents leave early for work, children step out to play and eat whatever they find. “Since this is litchi harvest season, they eat the fruit. The kids sleep early in the evening, exhausted from the day, and the parents do not wake them up for a meal,” he says. By early morning, the blood sugar levels go down. The child has little glycogen reserve in the liver, and is unable to mobilise glucose. An alternate pathway to generate glucose—fatty acid oxidation—kicks in. The MCPG in litchi, however, blocks this process. This leads to a buildup of amino acids, which affects the brain cells.

Though Sahni contends that if the toxin was the culprit, the children would vomit, have severe abdominal pain and a high SGPT (serum glutamic pyruvic transaminase) count, both Shah and he agree that early intervention is the key. By the time patients reach him, says Sahni, several hours would have passed, and they would have had multiple seizures. “Brain cells once degenerated can never recover,” he says. “Besides, not all children are malnourished, though they all belong to the low socioeconomic group and are victims of parental neglect.”

Shah contends their work has been thorough, and it had ruled out everything from virus, microbes and herbicides to pesticides and insecticides. “Short-term plans of early interventions with ten per cent dextrose, strengthening primary health centres, training doctors, making parents aware of the importance of evening meals and long-term programmes to address nutrition were discussed. Some of these were executed in the last few years. And, death rate came down in the previous years. This year, however, the entire state machinery was diverted to elections, and the situation went out of control,” he says. Shah adds that nobody is thinking of rehabilitation of the survivors. “Disability is highly likely and has been seen as well,” he says.

The cause is still unknown, says a senior health ministry official who was part of the team that was in Muzaffarpur to investigate the outbreak. “We found that the children had a range of illnesses, including TB meningitis and a range of etiologies (set of causes of a condition). Deaths occur throughout the year, but are not always recorded. Yes, there is a peak in the deaths around this time,” he says. Also, there was heterogeneity in the cases—the children brought in were unconscious, with or without fever; some had eaten, some had not, he says. “What triggers this, we do not know yet. We have no conclusive evidence to say whether it is because of litchi,” he says. “What we do know is that it is a metabolic derangement that affects a range of organs in the body, and that needs to be treated. And, social imbalances certainly need to be looked into.”

In the debate over the cause of the disease and the flood of interventions (plans to set up a new virology laboratory, a 100-bed ICU, and a demand of Rs100 crore from the Centre), Muzaffarpur has come to one conclusion—its children are poor, and hungry. “We give our children what we eat. But it is not enough, we know. Children of the rich don’t fall ill with litchi, ours do,” says Suresh Sahni of Harivanshpur, whose three-year-old daughter survived the disease. “The government needs to do something to save these children.” Rajesh had to “wait for hours to get a government ambulance to transport his daughter’s dead body”. Also, contrary to media reports, he says they have not received the Rs4 lakh compensation. “Until the children died and we began protesting, our village did not even have water,” he adds. “We got water, but they filed an FIR against us for protesting on the roads.”

On the day THE WEEK was in Muzaffarpur, it rained. A sigh of relief could be heard, especially from district and state officials. The “sting” of chamki bukhar will certainly decrease now. Until next year, that is. 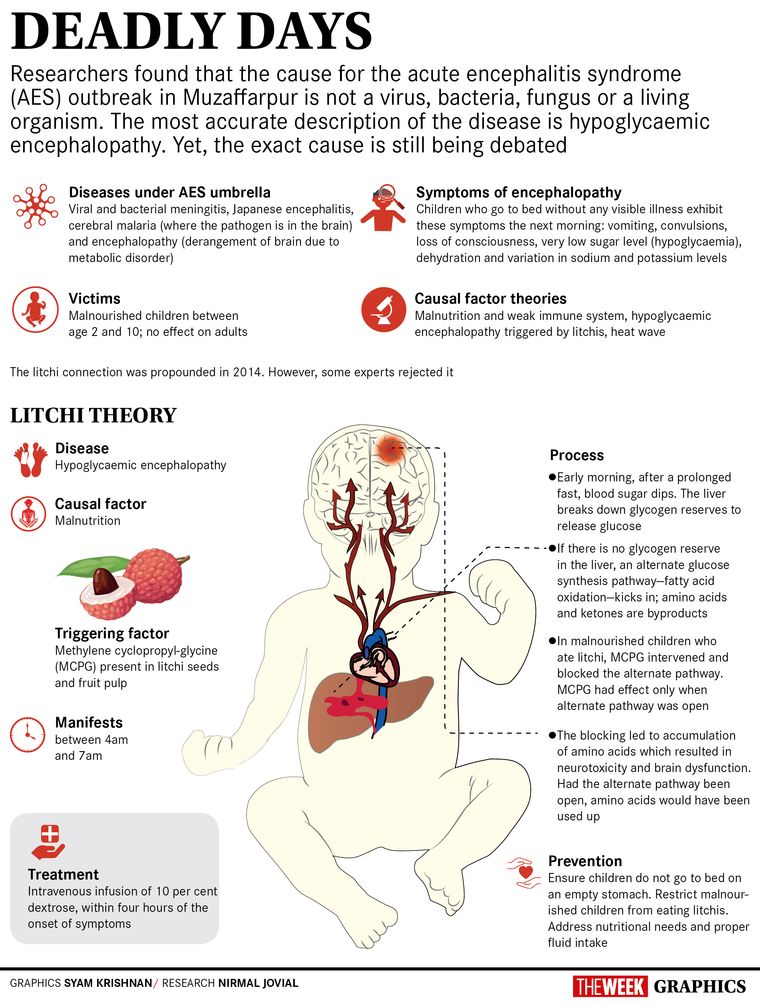