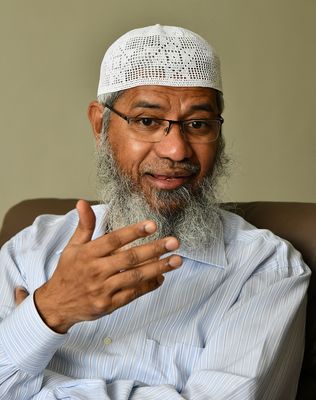 Tough challenge: Zakir Naik during an interview with THE WEEK | Sanjay Ahlawat

On May 16, with barely a week left for the counting of votes, BJP president Amit Shah addressed an election rally in Maharajganj in Uttar Pradesh. Amid thunderous applause, Shah said the controversial Islamic preacher Zakir Naik would be brought back from Malaysia and put behind bars. He referred to the world exclusive interview Naik gave to THE WEEK (issue dated May 19). ‘’When someone asked him why didn’t you go to India, he said he was afraid to do so when Modi was in power. He said he might return if Rahul baba, Mayawati and Akhilesh formed the government,” said Shah. “The Modi government will ensure that you will be arrested and put behind bars.”

One of the key themes of the BJP’s Lok Sabha campaign was bringing back fugitives to face the law. As the new home minister, Shah is expected to craft a firmer policy on national security. The National Investigation Agency and the Enforcement Directorate have begun actively pursuing the fugitives, starting with Naik. The ED has collated money-laundering charges to get a fresh arrest warrant issued. On June 3, the special court in Mumbai accepted the charge-sheet and fixed June 19 for hearing the case.

Naik had told THE WEEK that despite his offer to present himself through a Skype call, video conference or a meeting in Malaysia, he did not get any response. Investigators said they needed his custodial interrogation to confront him with facts and evidence. While Naik claimed that he was an NRI and his businesses and earnings outside India did not come under the purview of Indian investigators, ED officials said financial offences committed by NRIs were scheduled offences in India and money sent into the country would be treated as proceeds of crime. “Since he is an Indian national, all his properties can be attached once he is declared a fugitive,’’ said an ED official.

Naik said all donations to his Islamic Research Foundation were accounted for. The ED, however, said the donations were used for making speeches which incited young Muslims to take up terrorism. An investigator said the money generated by Naik’s television channel, Peace TV, would also be treated as proceeds of crime. The April 21 Sri Lanka bombings have brought more evidence against Naik in the form of a confessional statement by 29-year-old Riyas Aboobacker, who was arrested from Palakkad in Kerala. Aboobacker had been following Naik’s videos and wanted to carry out a similar attack in Kerala. An NIA team was in Sri Lanka just last week.

Naik, however, claimed that not a single person had become a terrorist because of his preachings. But he said he would not return to India fearing unjust persecution. ‘’Ninety per cent of the Muslims who faced terror charges had been let off after 10 to 15 years. [If] I will be in jail for 10 years, my entire mission would get disrupted,” he said.

Extradition attempts by Indian agencies have not been successful, especially after the intervention of Malaysian Prime Minister Mahathir Mohamad, who said the matter required further examination. But with his historic mandate Modi enjoys an invigorated diplomatic sway in the south Asian neighbourhood which will bolster the extradition efforts. N.R. Wasan, former special director-general of the NIA, said New Delhi would push hard for extradition. “But since he is a permanent resident of Malaysia, it may not deport him,” he said. “The request has to go through the entire legal process from lower courts to higher courts, which could take time.”