Delhi grapples with smog, as Centre and state look for solutions 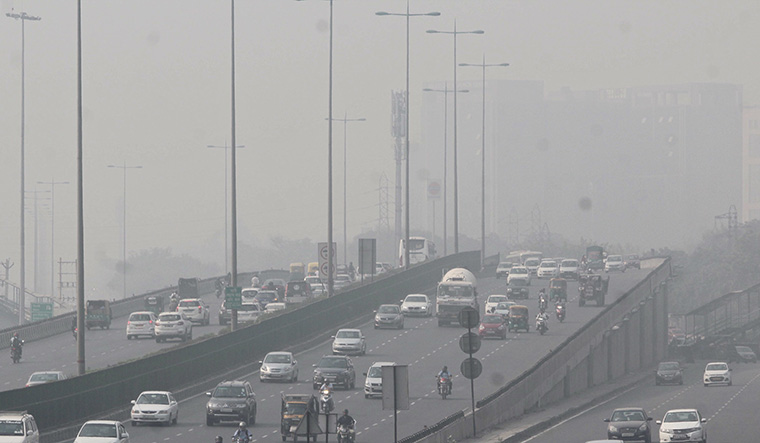 Smoky commute: Gurugram under a blanket of smog | Aayush Goel

Spring, summer, monsoon, autumn and winter. The standard seasons of Delhi. Over the past few years, however, another one has crept in between fall and winter—pollution. And Diwali is when it peaks. This year, the morning after the festivities, a cloud of smog blanketed the capital. The levels of PM10 in the air spiked to four-digit figures, which even the pollution monitoring machines could not read. They max out at 999 micrograms per cubic metre. The PM 2.5 count was just shy of the 999 mark.

The people of Delhi had flouted the Supreme Court’s guidelines on the festivities and had burst crackers well into the night. “We have registered cases against 75 offenders flouting the firecracker norms,” said Delhi Environment Minister Imran Hussain. “Fines of 014 lakh were imposed on several other citizens indulging in sale of firecrackers or bursting loud bombs. But this is not a final solution as we can all see.”

Said Delhi Health Minister Satyendar Jain: “Admittance of emergency patients has more than tripled at most major government hospitals. This is an alarming situation for all chest specialists. It might be helpful if all of us restrict our outdoor activities to a bare minimum in these days.”

The politics of pollution

Last month, pollution levels in Delhi started to peak, partly because of stubble burning in Punjab and Haryana. This led to a political slugfest. Delhi Chief Minister Arvind Kejriwal blamed the state governments for doing nothing. The Delhi government wrote to the two states, urging them to take preventive action against stubble burning. This year, in the Union budget, Finance Minister Arun Jaitley had initially earmarked Rs500 crore, which the cabinet increased to Rs1,150 crore, to fund a two-year plan to provide farmers machinery at subsidised rates for infield management of crop residue. 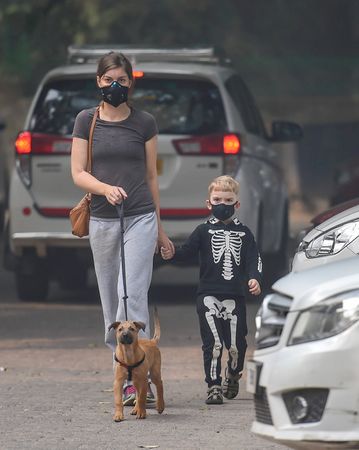 Reportedly, the funds were barely used. “Farmers are already indebted and no farmer wants to pay from his pocket to buy these machines,” said Delhi Deputy Chief Minister Manish Sisodia. “Farmers have not been given any subsidy. This is criminal; the Centre should intervene.”

The Haryana State Pollution Control Board, for its part, took out ads in Delhi newspapers, citing its own data about stubble burning. Punjab, too, countered Delhi’s charges. “Farmers had bought more than 24,000 crop-residue machines utilising the subsidy scheme this year,” said state agriculture secretary Kahan Singh Pannu. “I believe that incidents of field fires would have been reduced by 30 to 40 per cent in the state.”

On November 4, Chief Minister Amarinder Singh criticised Kejriwal for his attack on Punjab farmers, and added that he had not delivered on his promise to keep Delhi’s air clean and was blaming Punjab to save his skin. In 2016, a newly elected Kejriwal had promised electric buses, vacuum cleaning of roads and air purifiers throughout the city. Most of these promises remain unfulfilled.

Notably, apart from stubble burning, Delhi has its own contributors to pollution, including construction work, burning of waste in the open and unchecked vehicular pollution. Kejriwal, however, barely mentions these, and has instead been attacking the Centre and other states. Observers say that he has been soft on Haryana as he hopes to win the state election there and does not want to alienate the farmers.

Geology, too, has not favoured Delhi. The city is an apparent cesspool of gases, coming from as far as Pakistan’s Punjab province. “Delhi is landlocked, and biomass burning has heightened the intrusion of smog,” said Dr Gufran Beig, project director of System of Air Quality and Weather Forecasting and Research (SAFAR), at the Indian Institute of Tropical Meteorology in Pune. SAFAR was set up to monitor pollutants and microclimates in select Indian cities. “The upper winds are favourable and faster, bringing in the smoke from elsewhere,” said Beig. “A western disturbance is also increasing the humidity in Delhi’s air, which retains the pollutants and prevents them from escaping.”

Beig said that biomass burning accounted for 24 to 32 per cent of Delhi’s pollution problem this year. The other reasons remain largely unchecked, and short-term exposure to pollutants has sent many children and the elderly to chest specialists.

To test the air quality, an NGO in Delhi placed a replica of human lungs, which could replicate breathing, outside Sir Ganga Ram Hospital. It blackened in two days. Experts, in fact, said that breathing in this polluted air was like smoking 20 cigarettes a day. “We had expected this to happen in a month and not this soon,” said Arvind Kumar of Lung Care Foundation, one of the three organisers who installed the experiment. They said that pieces of the lungs would be sent to politicians, urging them to take concrete legislative action against air pollution.

Personal defence against Delhi’s pollution remains limited to the use of pollution masks and air purifiers. “This is a situation beyond any help,” said Barun Aggarwal, CEO and founder of Breathe Easy, a pollution management firm. “There is no way to remove the dust particles from one’s lungs after they have entered the body. It can impact babies in wombs. Using N95 and N99 pollution masks and reducing outdoor activity are all you can do.”

Aggarwal, who recently released a book called How to Grow Fresh Air, said people should declutter their homes and install oxygen-generating houseplants. “At the policy end, the government must mandate the use of Euro-6 fuel and sale of Euro-6 compliant vehicles,” he said. “Just banning ageing vehicles instead of the polluting ones is an improbable solution to this problem. Civic practices also need to be altered.”

Said Aggarwal’s co-author and air pollution expert Kamal Meattle: “I am a survivor of the pollution in Delhi in the early 1990s. Had I not had the good luck of discovering the three plants (mentioned in the book), I would not have been in Delhi or have been dead and gone.”

Meattle, the CEO of the Paharpur Business Centre, a certified green building, suggested that the right plants combined with right technology could better the air around us. He recommended a number of houseplants, including areca palm, mother-in-law’s tongue and money plant, along with air purifiers. These measures, he claimed, had reduced pollution in his commercial building to below the mandated level.

Some Delhiites have taken his advice, and have seen good results. “My husband and I changed all the filters of our air purifiers,” said Chiki Sarkar, cofounder of Juggernaut Publishers, which published How to Grow Fresh Air. “We did a short-term do-it-yourself sealing using masking tape on our windows. We had sealed our doors with rubber and brush last year. We are not ventilating at the moment; the book tells you when to ventilate, down to the right time of the day. Lastly, we invested in a good vacuum cleaner, the kind the authors recommend. Currently, our PM2.5 levels are under 15.”

Meattle put the blame on both people and politicians. “We believe that the government has to manage everything,” he said. “We must learn to help ourselves and others. We wake up to the problem in October and forget about it by March-end. It is only a Diwali to Holi issue.”

However, not all is lost. The crop-residue problem, for instance, could be resolved soon. A Punjab-based company, Sampurn Agri Ventures Private Limited (SAVPL), has adopted an IIT-Delhi developed technology to ferment paddy straw residue and generate Bio-CNG, which is cleaner than even CNG.

“We have engaged farmers in Fazilka, Punjab, and encouraged them to root out stubbles using cheap machines developed by the Punjab Agriculture University,” said managing director Sanjeev Nagpal. “We buy the crop residue from farmers at 04 to Rs7 per kilo and bring it to our Fazilka plant to make Bio-CNG.” He claims to have converted 15,000 tonnes of paddy crop residue this year.

And now, armed with a Rs7-crore soft loan from Centre’s science and technology department and high-value MoUs signed with the Indian Oil Corporation, Nagpal is scaling up the deployment of this technology. “A number of entrepreneurs have started to invest anywhere between Rs25 lakh and Rs35 crore to set up these biogas units. We are already working with the state governments of Punjab and Haryana and are in talks with the Uttar Pradesh government,” said Nagpal.

Union Petroleum Minister Dharmendra Pradhan has promised to buy the Bio-CNG from producers at Rs46 per kg, about 33 per cent more than the current retail price of CNG.

Hopefully, by next Diwali, Delhi could tame its season of smog.