Own goal? CBI accuses itself of corruption 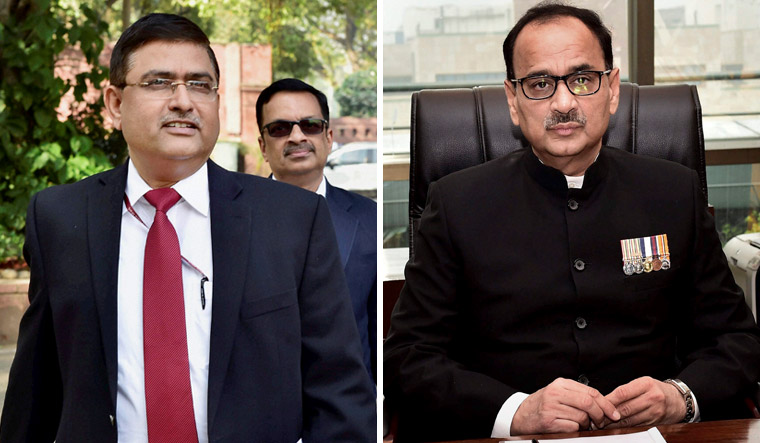 IN AN ELECTION YEAR, when the Central Bureau of Investigation raids a leader of an opposition party, the government is accused of using the agency to arm-twist political adversaries. When facing the heat of corruption charges, all parties, at some point, have questioned the independence of the CBI.

Coal-gate and 2G scams came as warning signals; the Supreme Court had asked the CBI to probe ex-director Ranjit Sinha’s role in the 2G spectrum scam inquiry. For the first time, the agency was probing its own director. The second instance came in 2017, when the CBI registered an FIR against former CBI director A.P. Singh and controversial meat exporter Moin Qureshi, on corruption charges. The rot had been setting in for a long time, and the warning signals had been ignored for far longer. Today, the agency is in the ICU.

On September 24, Central Vigilance Commissioner K.V. Chowdary had an hourlong meeting with an official of the policy wing of the CBI. The CVC, which has supervisory powers over CBI, had stepped in to examine the allegations and counter allegations within the CBI top brass. Incumbent CBI director Alok Verma’s number two, special director Rakesh Asthana, has accused him of “interference” in an Indian Railway Catering and Tourism Corporation (IRCTC) corruption case involving Rashtriya Janata Dal president Lalu Prasad.

Asthana, a Gujarat cadre IPS officer, alleged Verma tried to stall the raid against Lalu last year. This August, Asthana made it formal by filing a complaint with Cabinet Secretary Pradeep Sinha who sent the complaint to the CVC.

The CBI has to give periodic reports to the CVC on the corruption cases being probed by it. This is the first time the government has had to refer a complaint to the CVC against an incumbent CBI director.

The internal wrangling became public when the CBI issued a formal statement on September 21. The CBI said the CVC has sought files from it, based on Asthana’s complaint. More crucially, the CBI’s chief vigilance officer informed the CVC that Asthana’s role was being investigated by the agency in at least half a dozen cases, and that the complaint against Verma was an attempt by Asthana to intimidate the investigators. The CBI said that the CVC should “opine on the maintainability of the complaint and consider it malicious and frivolous in order to protect the integrity of the organisation”.

A CBI spokesperson said that the agency was cooperating with the CVC inquiry, and added that the allegation of preventing raids against the accused in the IRCTC case is false, as the charge-sheet against Lalu Prasad had been filed before the court only after Verma’s approval.

“If the agency is making public the cases it is probing against its own special director, then why is it not taking any action?” asked a former CBI official.

Former CBI special director M.L. Sharma said that if there is any truth in the reports of the allegations and counter-allegations between Verma and Asthana, then it does not auger well for the agency. “It is extremely sad that such allegations have surfaced as they raise doubts about the credibility of the organisation in the eyes of the public,” said Sharma. “But all allegations are not proof. So at this stage, we cannot say whether anyone is guilty or not. The CVC has called for the files and once it goes through the files, it will come to a conclusion.’’

Insiders said that the prime minister’s office has asked both sides to stop bickering in public. Incidentally, both officers had been hand-picked by the BJP government. While Verma took over as the CBI director on February 1, 2017, after his name was cleared by a panel headed by Prime Minister Narendra Modi, Asthana had been acting director for two months prior to that.

When Asthana’s name was being cleared for promotion to special director by a Chowdary-led panel last October, Verma submitted a note objecting to it saying he was under investigation in the Sterling Biotech probe. The CBI had registered a case against Vadodara-based Sterling Biotech in August 2017, and a diary recovered by Income Tax sleuths from the company premises had an entry that allegedly named Asthana as one of the officials who received bribes from the company. The CVC-led panel found the evidence unconvincing and recommended Asthana’s promotion.

The CBI is replete with tales of shadow boxing between the number one and number two. After Verma became director, he wanted to bring a few Indian Police Service officers to the agency’s joint director level. But the Chowdary-led CVC panel—which is responsible for clearing officers above the rank of SP for serving in the CBI—did not clear their names. “Those close to Verma believed that Asthana had scuttled that selection,” said a CBI official. Asthana’s supporters in the agency deny the charge.

Verma, a 1979 batch IPS officer, is due to retire in January 2019. “The CVC will need time to investigate and establish whether there has been subversion and manipulation in the investigation,” said a former CVC official who refused to be named. “The CVC is competent to handle direct complaints, but a matter like this involving the senior-most officers would not be an easy job since it is not their routine job. To prove where the tweaking has occurred, if any, will be tough to put in black and white. However, once it completes its task, the CVC will submit its report to the government, which has to take the final call.” The pending cases against Ranjit Sinha and A.P. Singh have still not reached a conclusion. Will the government bite the bullet?