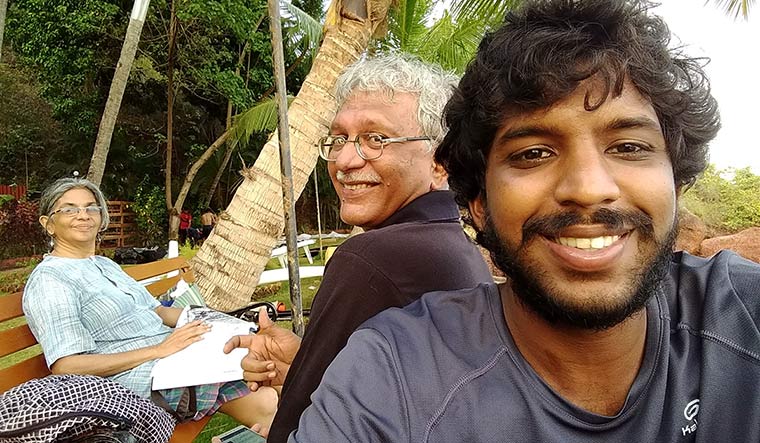 Sagar Abraham Gonsalves, 23, cannot invite his friends home these days. His father, 61-year-old Vernon Gonsalves, is one of the five activists arrested for alleged Maoist links, and placed under house arrest. Sagar and his mother, activist-lawyer Susan Abraham, are at a loss to explain what house arrest entails. More than half a dozen cops are spread outside their ground floor apartment in Andheri in Mumbai, ostensibly to guard his alleged “urban Naxalite” father. But Sagar is a proud son and he feels that unlike some other children, he does not need to look for a role model. “My father is my role model,” he says.

Vernon has fought many battles. The security agencies had filed 19 cases against the writer and professor and trade unionist under various sections of the Unlawful Activities Prevention Act (UAPA) and Arms Act in 2007 and put him in prison. Vernon spent five years and ten months in prison, including three as under-trial, before he was acquitted in 17 cases. With age catching up, Sagar is worried his father will meet the same fate again. The next hearing of the case in Supreme Court is on September 6.

Excerpts from an interaction:

You are living with your father who is under house arrest. How is it affecting your lives?

We were not told what are the conditions for house arrest. Suddenly we had a dozen armed cops stationed outside our house. No senior officer called us to explain anything. We can't get any visitors and the domestic help coming to our house was asked to furnish their identity cards and contact numbers to which they took great offence. Recently, I tried to bring a friend home who knows my family for a long time and he was stopped from meeting my father. Ours is a small middle-class society and to have armed cops moving around outside is terrible. The people living here have been greatly inconvenienced. But at least my father is at home. He is allowed to use the phone to talk to his brother and family members. My mother has been travelling a lot and meeting a lot of people and coordinating with lawyers.

Vernon Gonsalves and some others like lawyer-activist Arun Ferreira were arrested in 2007 for alleged links with Maoists. What happened to that case?

My father and some others were arrested in several cases in 2007. Those were fabricated cases. My father was arrested from near our house at Mahakali when he was going with a Sunday shopping list but was shown as arrested 40km away at Govandi with a gun! Evidence was planted on him and he was accused of planning explosions in multiple places with the other accused. He was put in prison but his trial did not start for three years. Ferreira has been acquitted in all cases. My father was acquitted in 17 of 19 cases. He was acquitted of all terror charges which included the explosives part as well. He was only convicted under the Arms Act for apparently having a gun. The gun was also false evidence and the conviction is under appeal which is pending before Nagpur High Court. Incidentally, the lawyer who was fighting that case, advocate Surendra Gadling, is one of the first five persons arrested by the Pune police in June for alleged Maoist links to the Elgar Parishad conclave held in Pune on December 31 last year.

This is the second time the anti-terror law has been invoked against your father.

In 2007, I was young and I saw things happen for the first time. At that time the gravity didn't sink in. Today, I know how everything can be manipulated to show him guilty. It is so wrong at so many levels when you realise that a person is put in jail for several years before the trial even begins. Then the pace of the trial is so slow, witnesses don't turn up, the charges cannot be proved and finally all that the police had claimed at the time of arrest, cannot stand judicial scrutiny and the charges are dropped. I think it is totally against any international law that you are charged guilty until proven innocent! It is extremely sad. However, I have faith in the Supreme Court to bring us justice.

What do you aspire to become?

Honestly, I have been very proud of the ideals my father has always stood and fought for. All my relatives tell me that he was a brilliant student in school and he could have risen to become a very successful person in any job he would have chosen. But he chose to work with the people and bring a positive change to the lives of the downtrodden. I am lucky that I don't have to look for a role model anywhere. Both my parents are very similar and have lived dedicated lives. That has inspired me a lot and I have made a beginning. I am working with an NGO today.

How is your father reacting to the charges against him?

My father has a sage like expression. He has been reacting to all the developments very quietly and calmly. That is how I have always seen him. Since we are living in close quarters and he is at home constantly, I have been trying to understand him better by observing his expressions intently. I see there is stress on him. After all, he is 61. He had been busy writing his columns and books and suddenly he has gone through so much. He is quite old and that worries me today.