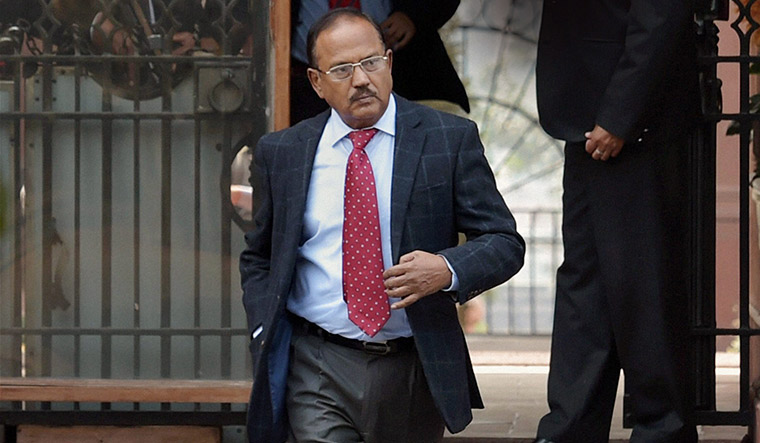 The Centre considers its defence planning committee (DPC), formed in April 2018, to be a game changer. The committee, headed by the national security adviser, comprises three chiefs of staff, the defence secretary, the expenditure secretary, the foreign secretary and the chief of integrated defence staff. It is the first of its kind in terms of civil-military cooperation, and is seen as an alternative to the long-standing demand of the armed forces for a single point of contact to enable better synergy between military personnel and civilians in the defence ministry. Its first meeting took place on May 3. Though no major decisions were taken, the armed forces are believed to have been asked to get ready for future wars and to reduce flab as part of a restructuring of forces.

Experts say that the idea of an NSA-headed committee came from the Strategic Policy Group. Formed by the Atal Bihari Vajpayee government in 1998, the group was tasked to promote inter-ministerial coordination on security matters. It had 16 members, including the cabinet secretary, the chiefs of staff and the RBI governor. But, it never really took off.

The DPC is tasked with analysing and evaluating all relevant inputs relating to national defence and security. It has four sub-committees—policy and strategy, plans and capability development, defence diplomacy and defence manufacturing (see box). The members of these sub-committees and their terms of reference would be finalised later after consultation with the NSA.

By bringing the expenditure secretary into the committee, the government is believed to have cleared a major hurdle with respect to acquisition of military hardware. The inclusion of the foreign secretary will aid in evaluating foreign policy and formulating an international defence engagement strategy, apart from aiding acquisition, sales and capacity development initiatives.

However, some believe that the committee diminishes the role of the chiefs of staff and the defence minister. Though the DPC would report to the defence minister, it could be difficult for her to express displeasure over a recommendation by a panel headed by the NSA, who reports directly to the prime minister. And its creation has made the proposed office of the chief of defence staff (CDS) redundant.

A similar attempt was made in 1977. The government had set up a committee for defence planning to allocate resources among the services and to “undertake regular assessment” relevant to national security. But, in April 2000, after the Kargil War, a Group of Ministers (GoM) was set up to review the national security system and study the recommendations of the Kargil Review Committee, which was headed by former IAS officer Krishnaswamy Subrahmanyam. The GoM’s task was to formulate specific proposals based on the the committee’s recommendations. The GoM submitted its report in February 2001. It strongly recommended the creation of the office of CDS, to provide “single-point military advice” to the cabinet committee on security. 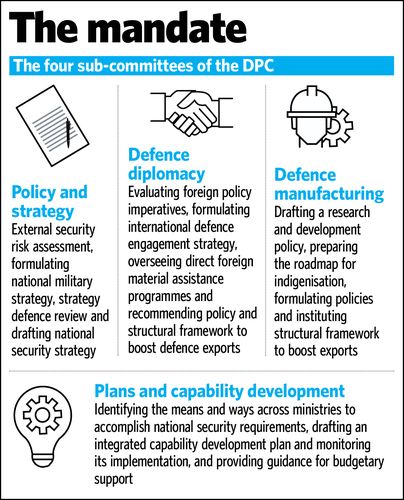 In 2012, prime minister’s task force on national security, headed by former cabinet secretary Naresh Chandra, again recommended the appointment of a tri-service chief. But, the idea was shelved because of objections from stakeholders. The political leadership was apprehensive about giving too much power to a single person. And, the bureaucracy did not want to surrender their decision making powers to a military man, who would be more powerful than the cabinet secretary—the most senior civil servant in the country.

However, in 2014, the BJP promised the setting up of the post in its manifesto.

Now, with the DPC, the government seems to have opted for the middle ground. Former Air Force chief S. Krishnaswamy, who was part of the Naresh Chandra task force, told THE WEEK: “Though I believe it is an outstanding move by the government for making quick and sharp decisions, I am unable to understand the reason for leaving out the secretary (defence production) and the DRDO chief.” He said that defence production and DRDO are key players in Make in India, which is necessary to become self-reliant in defence technology.

Krishnaswamy added that inter-service rivalry and every force wanting command were major problems with the idea of CDS. “It was very difficult to have all three services on the same page,” said Krishnaswamy. “Now, under the new defence planning committee, which is headed by the NSA—a minister of state level official—no service can ignore it.”

But, there is a feeling in military circles that the chiefs of staff might have issues serving under a bureaucrat, now that the creation of CDS seems unlikely. Retired lieutenant general Vinod Bhatia, who was director general of military operations, said there can be no substitute for a CDS. “We have been waiting for the last 17 years, since the GoM recommended it,” he said. He added that the committee which has been formed now should have looked at national security architecture by roping in the ministry of home affairs and the intelligence community.

Others, like retired lieutenant general Mohinder Puri, former deputy chief of the Army, said that the creation of the DPC is a good step. “On the face of it, the DPC looks good, as it takes the overall view of national and international security,” he said.

However, some believe that Ajit Doval, arguably one of the more powerful NSAs India has had, is already overloaded. He is the prime minister’s special representative on border issues with China, and frequently accompanies him on foreign visits. He also heads the executive council of the nuclear command authority, making him the custodian of the country’s nuclear arsenal.

Retired air vice-marshal Manmohan Bahadur said that though the idea of having a committee headed by the NSA is good, it would be very difficult for him to spare time for it. “Ideally, such a committee should have been directly under the prime minister’s office, for quicker decisions,” he said.