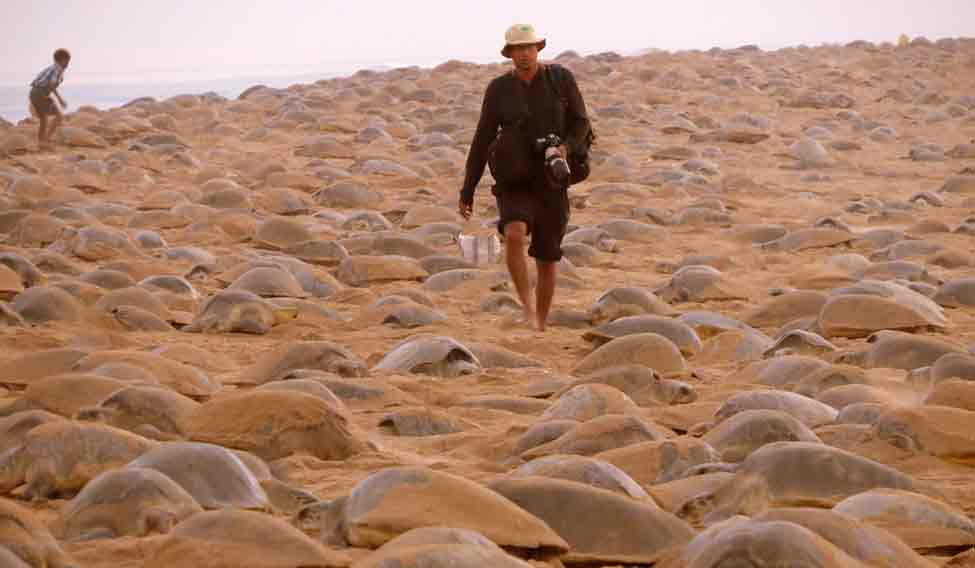 An olive ridley turtle, during nesting season, waddles up the shore, leaving a trail of flipper marks. She digs a nest where she lays 100 to 150 eggs in quick succession. Then she does a small turtle dance, throwing sand all over and camouflaging the area before going back to sea. After 45 to 50 days, the eggs start hatching and tiny hatchlings break open the egg shells with their egg tooth. When the temperature drops, signifying the arrival of night, they will emerge en masse from their nests, scrambling and tumbling out into the world. Directed by the light of the moon and the stars reflecting off the waters, they will make a dash to the sea, where they belong.

The sad thing is that, out of all the hatchlings that emerge from their shells, one in a thousand might survive. Artificial lights that mislead them away from the sea, depredation by dogs, crabs and ants and collection of turtle eggs for consumption are some of the reasons for the relatively small numbers that reach adulthood. Out in the sea, they get caught in trawler nets or are feasted on by the larger fish. When they have matured, after 10 to 15 years, they are directed by the earth’s magnetic field, currents and various smells to the same seashore where they hatched. And thus the cycle repeats itself.

Unfortunately, this is a cycle that might be growing smaller, although fears of their extinction might be exaggerated. “The number of dead turtles that wash ashore has been increasing,” says Akila Balu, one of the core members of the Students Sea Turtle Conservation Network (SSTCN), which is the primary turtle conservation group in Chennai. During the nesting season between December and April, SSTCN conducts turtle walks every weekend over a seven-kilometre stretch from Besant Nagar beach to Neelanakarai to find nests, which are transferred to two hatcheries. When the eggs, closely monitored, hatch, the hatchlings are released into the sea.

“Seeing a turtle nest is an experience like no other,” says Kartik Shanker, director of the NGO ATREE and one of the early leaders of SSTCN. In his book From Soup to Superstar, a history of sea turtle conservation in India across the last half century, he describes the experience. “We are scraping the sand with our hands, gently poking a short stick here and there. Suddenly, the stick plunges in. I stop, heart thumping. Dig in frantically, but it’s a crab hole. More scraping of sand, stick poking. The stick plunges in again, and I follow its path. Here the sand is soft and loose. I think I’ve found it, I say. A few seconds later, my fingers swim into a sea of eggs. They are warm and wet, and that feeling is one of the high points of life.”

Chennai is the birthplace of turtle conservation in India. It all began in 1969 when a fisherman brought an olive ridley to wildlife conservationist Romulus Whitaker’s Madras Snake Park. “We talked to him about sea turtles and heard for the first time that they nested on the Madras coast and that the eggs were collected by ‘cheri people’, not fishermen who considered sea turtles sacred,” says Whitaker. “Then we started doing sea turtle walks in the early 1970s, saw nests being poached and dead turtles washing up ashore. That was how we realised that sea turtles needed our help.”

From 1982 to 1988, the forest department set up several hatcheries along the Tamil Nadu coast. Unfortunately, in the late 1980s, it decided to shut down its hatcheries. That’s when a plan was hatched by some ambitious students of Madras Christian College. Why not start a student’s group that can take over conservation-related activities? And thus, SSTCN was formed in 1988.

“In the early years, we thought that each year would be the last,” says V. Arun, a school teacher who joined SSTCN in 1997. “Three or four of us kept it alive for nearly five years. It didn’t look very promising. But things changed and now, we know it will go on. Earlier, students would stay for one or two years and then get jobs or leave for other reasons. Today, there are volunteers who have stayed for more than 10 years."

Many conservationists have fond memories of the turtle walks. “Once, we saw a nesting turtle under a boat parked on the beach,” recounts Balu. “She dug between 13 to 14 holes but did not lay eggs. Then we realised that her back flippers were deformed. One volunteer came up from behind and tried helping her. Earlier, we had done this with another turtle who had only hind flippers. So our guys would put a hand in and scoop sand where the nest was being built. First she would shovel out sand and then we would do the same. But this turtle wouldn’t allow us to do the same. So we kept watching her. Finally, some of us dozed off and she went back to sea without laying eggs.”

Both Balu and Shanker say that the efforts of turtle conservationists, in the long run, don’t make much of a dent in sea turtle mortality. Development policies have a major role to play, feels Shanker. “Fisheries may kill adult turtles, and we should work to reduce mortality, but populations can recover from this. When ports and industries on the coast destroy their nesting beaches, that is irreversible,” he says.

He says that the greater role that conservation groups like the SSTCN play might be in educating and raising awareness. “They play a very strong emotional role in creating a passion for conservation, especially in young children,” he says. When you see a child’s face light up when she holds a hatchling in her hands, you might be saving a hundred sea turtles in the long run.

Your form could not be submitted.
This browser settings will not support to add bookmarks programmatically. Please press Ctrl+D or change settings to bookmark this page.
Topics : #Life on the coast | #environment