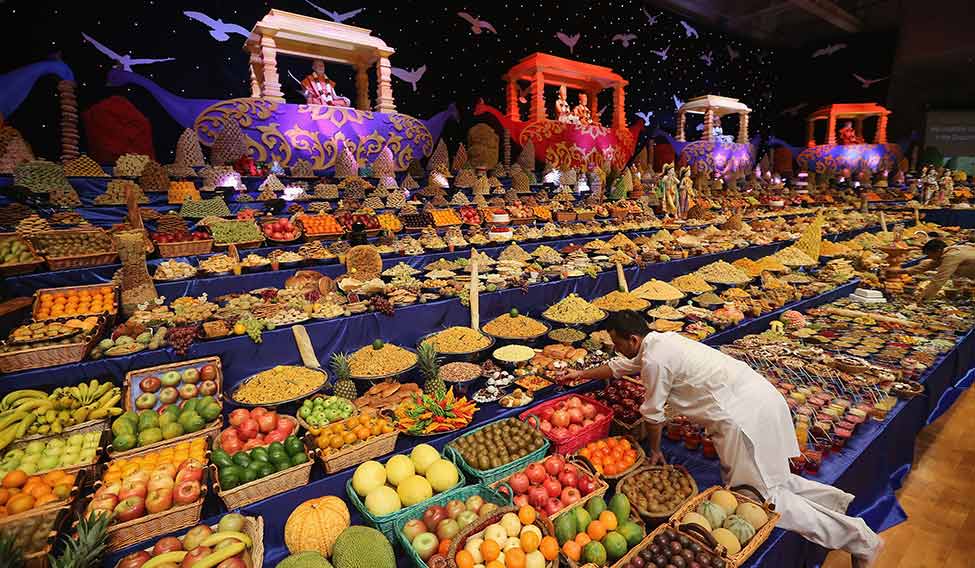 Riot of flavours: A grand feast during Diwali at a Swaminarayan Temple in London | Getty Images

Religious activities, community service and yoga go hand in hand for Hindus in the UK

Religion in the UK has become an intrinsic part of the Hindu identity, especially in the last few decades. It is perhaps a symbol of their migration pattern after World War II or during the expulsion by Idi Amin. With time, they have established temples of their faith in the UK, as well as many community organisations and umbrella bodies to represent their ideologies. But what was exclusive to the people from that particular faith before, is now available to the wider society—and Britain stands as one of the best examples of a successful multicultural country.

Historically, Hinduism has had a presence in Britain from the early 19th century, since India was part of the British Empire. According to the 2011 Census of England and Wales, 8,17,000 residents (1.5 per cent) identified themselves as Hindus, the fourth largest religious group after Christianity, No Religion and Islam (5 per cent).

Hindus are the second largest South Asian group in the UK (27 per cent) after Muslims (57 per cent). Sikhs form 14 per cent. According to the 2001 Census, there were 101 Hindu temples in the UK, compared to 614 mosques and 193 gurdwaras.

The west has always been fascinated by Hinduism—not just because of its liberal doctrines, but because of its relevance at any point of life, situation or age. Everybody knows how George Harrison, lead guitarist of The Beatles, embraced Hinduism and became a Hare Krishna devotee. He donated Bhaktivedanta Manor in Watford to ISKCON in 1973. In fact, when the temple faced a threat of closing down in the 1990s, the whole community as well as the Hindu temples unanimously stood behind it. They took to the streets in peaceful protests, inspired MPs and peers to join them and forced the Hertsmere council to step back.

The BAPS Shri Swaminarayan Temple at Neasden in northwest London is also doing much to impart its knowledge on Hinduism. Former British prime minister David Cameron visited the temple on several occasions, including once on Diwali, and the current Prime Minister Theresa May paid a visit four days before the elections on June 8.

The mayor of London, Sadiq Khan,visited the Swaminarayan temples in Kingsbury and Neasden during his mayoral election campaign in 2016 and he represented the true spirit of a Londoner, which is beyond any faith or ethnicity. A proud Muslim himself, Khan said in a statement, “Swaminarayan Mandir in Neasden is one of my favourite places in London. The temple is an incredible testament to the dedication of the local community, who worked so hard to build the biggest Hindu temple outside of India.”

Yogesh Patel, from the Neasden Swaminarayan temple, told THE WEEK: “Historically, mandirs have not just remained centres of worship, but evolved into extensive complexes encompassing many roles to serve the special needs of society. In addition to their essential function in religious worship, BAPS mandirs around the world are hubs of a wide range of community services, including child care, educational guidance, family values, sports, health awareness and much more. Mandirs play an important role in the lives of many by providing peace, solace and meaning during times of personal and family need. His Holiness Pramukh Swami Maharaj, the creator of the Shri Swaminarayan Mandir in Neasden, used to explain: ‘Schools will educate the mind, but who will educate the soul? Hospitals will mend a broken arm, but who will mend a broken heart? Cinemas and arcades will excite the mind, but where will one go for peace of mind?’”

The first and largest traditional Hindu temple in Europe, the Swaminarayan temple in Neasden gets 700 school groups and more than 4,00,000 worshippers and visitors each year.

The Gujarat Hindu Society temple and community centre in Preston in Lancashire hosts more than 100 visits from local scout and brownies groups, schools, universities and professional organisations. Over 2,000 children and adults come on organised visits from towns and cities across the northwest. Currently, temple visits are led by committee members, under the leadership of president Ishwar Tailor, who have become adept at hosting such events. An annual conference is organised at the community centre by the Standing Advisory Council for Religious Education team. Knowledgeable members and adherents of the Hindu faith are invited to inform children from local secondary schools about Hinduism. The temple in a statement said, “We feel it is our duty to share our Hindu faith and to complement the religious education syllabus.”

Faith in the UK is not confined to temples alone. Professionals have also formed a group that celebrates the essence of Hinduism within the city. “Hinduism and its values are imperative to second-generation Britons as it binds us to our roots, and helps us to navigate through the complexities of modern life,” said Neel Patani, president of City Hindus Network. Similarly, the armed forces have launched a Hindu wing that helps the soldiers to observe festivities like Raksha Bandhan and Diwali.

This year is special for the Hindus in Britain. They are eagerly waiting for two events. One, the International Day of Yoga at Trafalgar Square, organised by the High Commission of India in coordination with the India Tourism Office, and supported by the mayor and a number of yoga organisations. Two, a discourse by spiritual leader Morari Bapu at Wembley Arena in London. He would be interpreting the Ramayan, applying its ancient wisdom to modern-day living. Recently, Sadhguru Jaggi Vasudev visited the UK; he addressed hundreds of people and that brought him immense popularity, especially among the younger Britons.

Alice Green regularly does yoga and feels it is not just an expression of a particular religion. “I think yoga is more than Hinduism. It is a good way to stay fit as well as be in touch with your inner soul,” she says. “There are so many kinds of yoga. There is suspension yoga and hot yoga. A lot of it is about your inner peace and spiritual wellbeing and how you attain it. And if that is part of Hinduism, maybe I am a proud Hindu, too.”