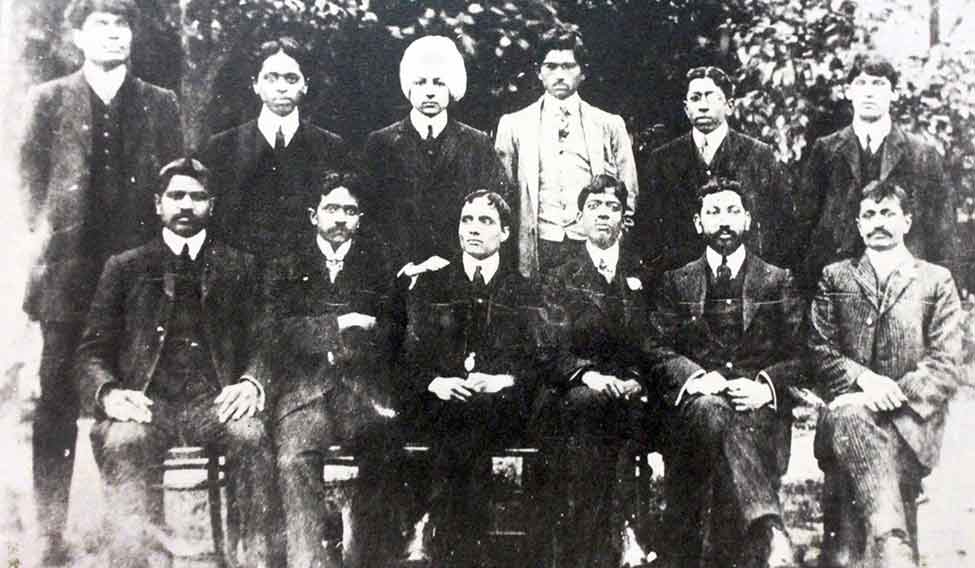 The young firebrand: Savarkar (seated, third from left) in London.

A controversial figure in the history of India’s freedom struggle, V.D. Savarkar was considered a hero by some and a manipulator by others. In his book Veer Savarkar, Dhananjay Keer narrates an incident to illustrate 12-year-old Savarkar's 'bravery'. “We vandalised the mosque to our heart’s content and raised the flag of our bravery on it. We followed the war strategy of Shivaji completely and ran away from the site after accomplishing our task,” Savarkar is believed to have said after leading a group of students who attacked the village mosque following Hindu-Muslim riots.

As young Indian nationalists, Savarkar and Gandhi met at India House in London in 1906 and the meeting was anything but pleasant. The Economist magazine wrote in an article two years ago: “In 1906, in a lodging house for Indian students in Highgate, a pleasant area of north London, a young lawyer called Mohandas Karamchand Gandhi dropped in on a law student called Vinayak Damodar Savarkar, who happened to be frying prawns at that time. Savarkar offered Gandhi some of his meal; Gandhi, a vegetarian, refused. Savarkar allegedly retorted that only a fool would attempt to resist the British without being fortified by animal protein.”

In his first book, The Indian War of Independence 1857, Savarkar celebrates secularism and the religious unity of the leaders of his time. In his second book, however, he denounces secularism and takes to task the Maratha kings for not taking revenge on Muslims for the atrocities committed by Ahmad Shah Durrani of Afghanistan in 1757.

He started a movement to purify the Marathi language and introduced words like dooradhwani (telephone) and sansad (parliament). He also coined the term hindutva to describe the “quality of being a Hindu”. He published his autobiography Mazi Janmathep (My Transportation for Life) in 1927. However, there are no references to the mercy petitions he filed while in the Cellular Jail.

Savarkar supported Hitler's anti-Jewish policy. “There is no reason to suppose that Hitler must be a human monster.... Nazism proved undeniably the saviour of Germany,” he is believed to have said.

He also worked against Subhas Chandra Bose's efforts to secure foreign help for the freedom movement. When Constituent Assembly adopted the tricolour as the national flag on July 29, 1947, but Savarkar rejected it saying: “It can never be recognised as the national flag of our Hindustan...the authoritative flag of Hindusthan, our Motherland and Holy land... can be no other than the Bhagva (saffron flag)....

Your form could not be submitted.
This browser settings will not support to add bookmarks programmatically. Please press Ctrl+D or change settings to bookmark this page.
Topics : #Veer Savarkar | #RSS