People say they don't need a government that makes them beggars 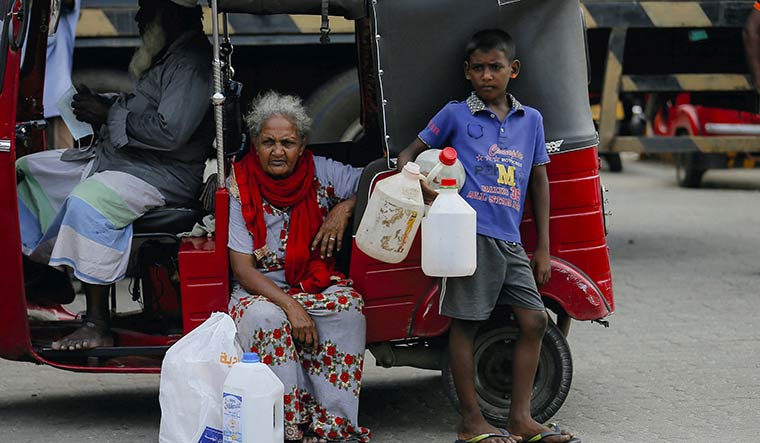 Difficult times: A boy holds empty containers as he waits with his family members to buy kerosene at a fuel station in Colombo | Reuters

FOR 33-YEAR-old Anandhi from Jaffna, life has been an ordeal for the past two months. She runs the household all by herself. Her husband, Uthayakumar, died of Covid and her parents, who were injured in the civil war, are wheelchair-bound. Her two sons attend online classes whenever possible. But Anandhi’s immediate concern is the food and fuel shortage which has engulfed Sri Lanka. Although she works in a supermarket, she finds it difficult to get essential goods as hardly any supplies reach Jaffna these days. “Sometimes, I don’t get kerosene even after waiting for three hours. Our country is becoming unliveable,” she said.

Anandhi’s neighbour Apinaya Devanesan can no longer get milk for her three-year-old daughter, despite standing in queue from dawn. For a few days, Anandhi used to bring her milk powder from the supermarket where she works, but Apinaya said she could no longer afford it. The price of milk powder has gone up to LKR (Lankan rupees) 2,000 per kilogram.

“For the past nine weeks, the price of milk powder has been going up in the world market. With our falling dollar reserves, we are not able to import from the world market,” said Asoka Bandara, spokesperson for the Milk Powder Importers’ Association.

Chicken, which used to be a staple, now costs nearly LKR 6,500 a kilo. “I buy only vegetables these days. But the nonavailability of kerosene and cooking gas is another problem,” said Dilanta Weerasekara, an autorickshaw driver from Colombo.

With its foreign exchange reserves almost gone, Sri Lanka is witnessing a crisis which was in the making for more than a decade, because of excess borrowing and increased imports. The country’s trade deficit stands at $6 billion which is 85 per cent more than its exports. “We import everything. Our only export is tea, for which we are dependent on the European market. After the Ukraine-Russia war, our tea exports have come down,” said Lasantha Perera, who runs a retail tea store in Colombo.

After facing salary cuts because of the pandemic, people like Weerasekara have been working multiple jobs, and the economic crisis has made things worse. Weerasekara works in a mobile store by day and drives an autorickshaw at night. “My salary is not enough to run the family. I don’t know for how long I will be able to drive the autorickshaw because of the shortage of fuel,” he said.

Weerasekara recently went to Sri Lanka’s administrative capital, Sri Jayawardenepura Kotte, to take part in a protest against the Gotabaya Rajapaksa government. “It took place on March 6 and 7. I went there both days,” he said. “It will at least show our problems to those who live in luxury bungalows.”

On March 7, people in the capital were seen holding placards saying, “Enough of corruption”, “Gotabaya go home” and “Why have you made us beggars?” Udhitha Deshapriya, a civil engineer, said Sri Lankans had been suffering for a long time. “There has to be a solution. I am here to register my protest,” he said. Rajitha Gunasekara, a banker who lost his job recently, said the incumbent government should go. “Do we actually need a government that makes us live like beggars?” he asked.

Gunasekara is also upset that his daughter, Chandrika, is unable to write her O-Level exams. “She could not go to school because of the pandemic. Now there are no exams because of paper shortage. The government did not anticipate anything,” he said. Chandrika had to study by candlelight because of the long power cuts.

“Every day, there will be a power cut for at least six hours. We need to charge our phones, computers and then work,” said Ishini Gamage, who works for an Indian software company in Colombo.

“Our children are unable to go to school or write their exams. Our babies are not getting milk. Are we going to make our next generation beggars?” asked Rasakumaran, who runs an apparel store in Colombo. He is finding the 7km commute from his home to his shop difficult because of fuel shortage. He has to fill fuel for his vehicle once in three days for LKR 4,000, after spending at least three to four hours in the queue.

At Mullaitivu in the Northern Province, the situation is no different. Selvakumaran, who runs a grocery store, has to wait for three days for items to come from Colombo. Rice is now being imported from India, as paddy cultivation has plummeted because of the fertiliser ban. “Our home-grown red rice is not available,” said Selvakumaran, who is worried whether his order from Colombo would be delivered on time.

Rasarathinam Jothilangam waits in a long queue every week for at least eight hours to buy kerosene, although he has an LPG connection. But it has been a month since he got a cylinder delivered at his home at Wellawatte, in Colombo. “We do not get enough kerosene for cooking food for five people in my family,” said Rasarathinam.

The price of petrol was increased by LKR 77 and diesel by LKR 55 by the government-owned Ceylon Petroleum on March 2. “The demand is huge and the supply is short,” said a petrol pump worker in Colombo. Ishini Jayasinghe, who works for a national bank in Colombo, said she had not taken her two-wheeler out for months, fearing long queues. “I walk 8km every day. I cannot wait in the queue to fill petrol and the cost is also not affordable,” said Jayasinghe.

Former energy minister Udaya Gammanpila said people were suffering because the government deliberately crashed the economy. Gammanpila was dropped from the cabinet last month along with industries minister Wimal Weerawansa after they criticised Finance Minister Basil Rajapaksa for his “rigid working style”. Before he was sacked, Gammanpila told the parliament that the problem facing Sri Lanka was not power or fuel shortage but the non-availability of dollars.

The crisis has erupted into anger against the ruling Rajapaksa clan. People picketed the president’s secretariat on March 15 and 17. “Winning a war alone is not enough. Rulers must understand the people’s needs,” said Kamanthi Jayasinghe, who was at the secretariat campus during the picketing. “More than building highways and ports, the duty of a government is to feed its people. We want milk for our children.”