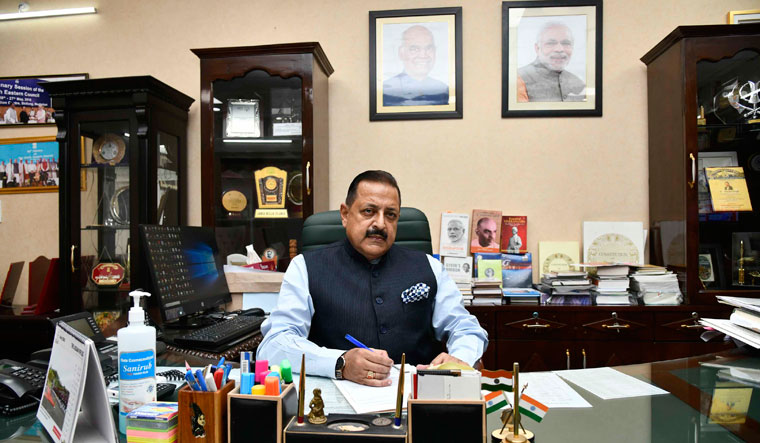 Q/ There is concern over the security situation in Jammu and Kashmir post abrogation of Article 370.

A/ Till as late as August 5, 2019, all the prophets of doom were saying no one can touch Article 370. They had gone to the extent of saying that if somebody even touches it, there will be earthquakes, (eruption of) volcanoes and bloodshed. But... the following six months have been the most peaceful festive season in Jammu and Kashmir. This was the time when we had Diwali, Holi, Eid and Moharram. Among national [holidays], we had Independence Day and Republic Day. In the last 30 years, there has not been a single occasion when there has been no untoward incident during national [holidays]. The perpetrators of terrorism in the state and Pakistan-sponsored terror groups would always try to show their presence. This was the only year when no untoward incident took place.... This was also the year when Block Development Council elections [were held] for the first time in Jammu and Kashmir. This itself speaks for the security situation.

Q/ When can we expect a terror-free Jammu and Kashmir?

A/ I can speak from the evidence on the ground that terrorists are on the run. This is going to be the last phase of militancy or terrorism in Jammu and Kashmir.

Q/ How is the government ensuring good governance?

A/ The Prevention of Corruption Act, 1988, dealt by the Department of Personnel and Training handled by me, has been implemented in Jammu and Kashmir for the first time. Jammu and Kashmir had its own anti-corruption law which was lacklustre.... Now it has an act that talks of time-bound disposal of cases and after the 2018 amendment, not only the bribe taker but the bribe giver is also held guilty. Secondly, the jurisdiction of the Central Vigilance Commission has been extended. The Right to Information Act is same as at the Centre. All these laws were either not implemented or implemented in a modified or truncated form to suit political interests. Citizenship rights were not given to refugees who settled there from Pakistan....

But now for the first time, Jammu and Kashmir is enjoying similar kind of liberty and freedom as rest of India. It is the only Union territory which has got two AIIMS. This happened after the personal intervention of Prime Minister Narendra Modi. In the last five years, more than half a dozen medical colleges funded by the Centre were opened but there was no faculty since the local government did not allow them to purchase land. That barrier has been removed now.

Q/ There is worry that the new domicile law will change the demography of Jammu and Kashmir.

A/ This debate has been raised by those who have a huge vested political interest. It is not the population demography they are worried about, it is the vote bank demography. They feel if someone comes from outside and gets citizenship after living there for ten years as per the domicile law—or an IAS officer is allocated AGMUT (Arunachal Pradesh-Goa-Mizoram-Union Territory) cadre and after serving there for a couple of years, he will also get voting rights and likewise students, Pakistani refugees or Gorkha settlers get similar voting rights—that will impact their limited captive vote bank on which they have been thriving on. Otherwise, if there is a healthy change of demography happening all over the world, why should Jammu and Kashmir shy away from it? There are certain advantages of it. Now people are increasingly realising this facade of demography, and the debate is cooling down.

Q/ How big is the focus on industrial growth?

A/ Jalandhar city, which is close to Jammu, is a big business centre but the latter has not [benefited from it]. This is because investments were not allowed from outside. All that has been changed with the new domicile law. The Covid-19 lockdown has caused some interruption, otherwise a big outreach programme had been started by the Union territory government to facilitate and create awareness about investment options that were available. They were visualising a huge investment up to 025,000 crore and had started conducting outreach programmes in various cities like Mumbai, Bengaluru and Kolkata. New industrial hubs have been identified in small districts like Udhampur and many potential investors are already keen to set up units.

Q/ When will the assembly elections be held?

A/ They will happen in due course of time and, as you know, the delimitation exercise is also going on.

Q/ What is the plan for Pakistan-occupied-Jammu and Kashmir?

A/ PoJK is a part of India and it was forcibly occupied by Pakistan and that too when Indian forces were on the verge of retrieving it. It was one of the many Nehruvian blunders as history records it that prime minister Jawaharlal Nehru went to the Akashvani Bhavan and made the announcement of unilateral ceasefire without consulting his cabinet, home minister or defence minister and the territory was lost to Pakistan.

The question now is how to retrieve it. Even in 1994, when the Congress was in power, a resolution was passed unanimously by Parliament saying that the only pending issue between India and Pakistan is of retrieving the illegally occupied part of Jammu and Kashmir that is in Pakistan's occupation. So why were successive Congress governments quiet on it for 25 years? Now since the BJP and the NDA have shown the will to move forward and having accomplished what it has in the last one year, I think we should look forward to it as the next agenda.

Q/ How do you see the future of separatists in the Valley and mainstream political parties like the National Conference and the PDP?

A/ Separatists have no future. Separatism in Kashmir is by convenience and not conviction.... They have been unfaithful to their own people and trying to bluff them by raising the slogan of separatism. There are many separatist leaders who are drawing pension as ex-legislators, including Geelani....

On the one hand they claim not to be subscribing to the Constitution of India, on the other hand they are very particular to make use of each and every privilege made available through the Constitution. They fooled people for three generations and now the young generation in Kashmir is not ready to be taken for a ride....

As far as the dynasties are concerned, not just in Jammu and Kashmir but all over India, the feudalist hangover is over.... Today, people have learnt to test and elect their representatives on the basis of hard evidence. What has also happened is that in the last six years under Modi, there has been a whole new opening of avenues and opportunities particularly for the youth and now in the age of social media and connectivity, the youth of Kashmir are able to realise what they are missing out.

Q/ How do you see the entry of new political parties in Jammu and Kashmir?

A/ As far as we in the BJP are concerned, the more the merrier. That is the spirit of democracy.