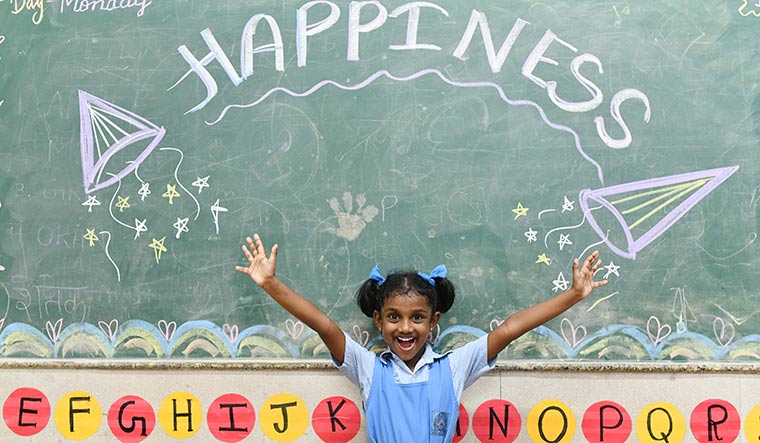 The Finns would tell you that the secret to happiness is being in tune with nature. They are mighty proud of their expansive forest cover and clean air that lowers depression and anxiety, saunas that flush out toxins and the silence that stirs productive contemplation. After being voted the happiest country for the second consecutive year in the UN-sponsored World Happiness Report, Finland’s tourism board started the ‘Rent a Finn’ campaign, which promotes the recruitment of locals as happiness guides. So, a Japanese couple gets to explore the true meaning of sisu—a Finnish term for resilience in the face of extreme adversity. An Italian guest will learn the secrets behind the Finnish school system, considered one of the best in the world.

The embassy of Finland in New Delhi confirmed no Indian tourists were selected for the inaugural edition of ‘Rent a Finn’ in June, but did not disclose how many from India applied. Finland may not be on the radar for Indian tourists, but a country that continually figures in the bottom of the pile in global happiness rankings could learn a thing or two from the Finns. Of the 156 nations surveyed in the World Happiness Report, India ranks 140, down from 133 last year. In Gallup’s 2018 World Poll of 150 countries to gauge perception of well-being, India had the lowest score, with 3 per cent of Indians reporting in 2017 that they were “thriving”, compared with 14 per cent in 2014. The tepid response to this one question—if you were in trouble, do you have relatives or friends you can count on to help you whenever you need them?—dramatically brought down the “thriving” score. 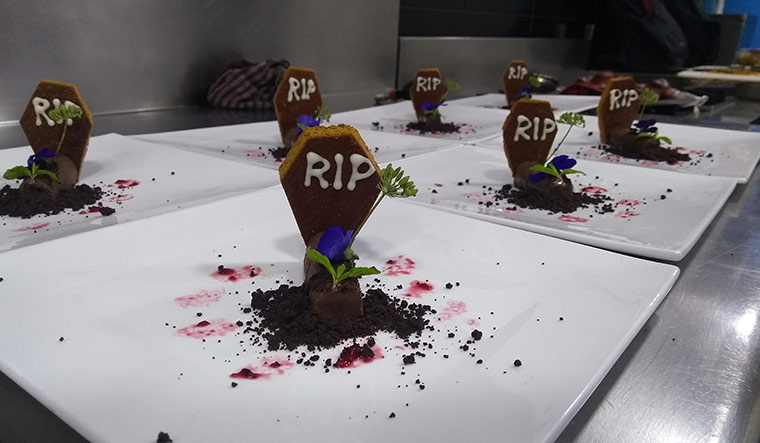 Funeral food, not: A delicacy served at one of Death Over Dinner’s gatherings.

Mapping unhappiness in India will be a limitless exercise. But all is not bleak. Here are some strange, life-affirming vignettes of hope and felicity from people who advocate calm and peace by believing their own trajectories. They are the happiness hopefuls.

Ninety-five per cent of our brain stores garbage, says Kamlesh Masalawala from Surat. “It stores thoughts and memories that hurt and cause pain and suffering. I help people lighten the load by making them cry,” says the laughter therapist who started a crying club in a temple’s basement two years ago. “Every last Sunday of the month from 8am to 10am, we assemble and cry. And guess what? It is easier to get people to cry.”

At the first session of his Healthy Crying Club on June 25, 2017, 65 people showed up. “I did not even know what I could possibly say to make them cry. You tell me, is anyone in the world doing this? Psychiatrists have told me how even they wish they could get their patients to cry and feel lighter. It is like I have cracked some code,” says Masalawala, who once repaired wall radios like his father, but now fixes imitation jewellery. 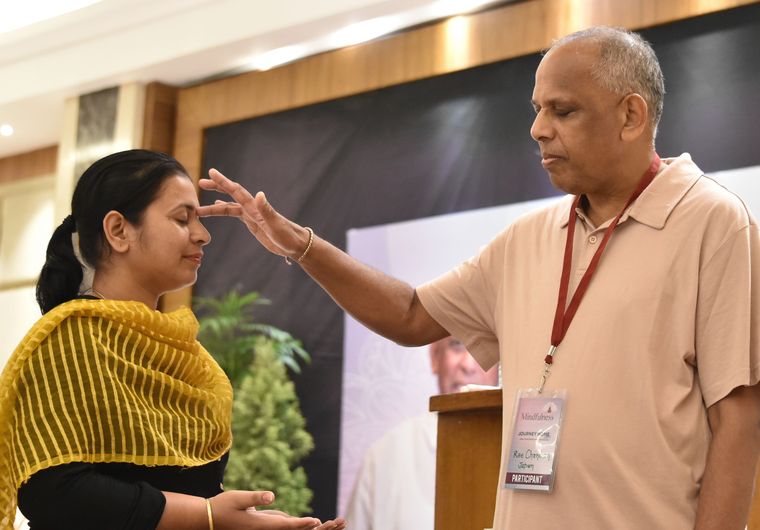 From recounting episodes of a mother selling jewellery to feed her children to recalling the sudden death of a beloved neighbourhood dog, four or five people take the stage and share their tear-jerkers. “I will make Surat suicide-free in five years,” says Masalawala.

It will be hard to sell a person like Rae Chandran to nonbelievers. He calls himself a spiritual teacher, channel and healer who helps people in their “awakening and self-discovery” through methods that have no scientific basis. In June, he held a workshop for 12-strand DNA activation at a luxury hotel-club, aptly named Nirvana, in Ludhiana for 120 participants from across India and the world. He speaks the language of light from space, say his followers, and transmits energy directly from the source of creation. “Our DNAs have split. This workshop will activate our good DNA. It leads to a power surge,” says a follower from Visakhapatnam who is battling guilt after her 30-year-old brother committed suicide over a failed relationship.

Chandran exhorts people to “love yourself” and tells them, “you are divinity inside”. “Indian gods demand too much suffering. Indian spiritual traditions have failed to convince me,” he says. “Spirituality has to be about everyday life. It has to create peace, prosperity, abundance and joy.” 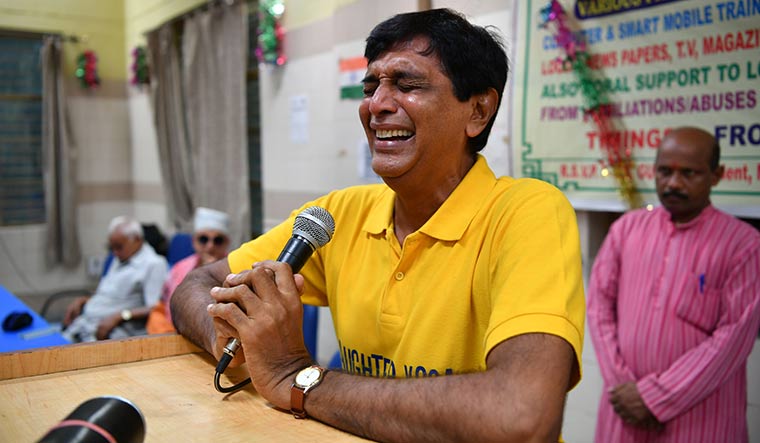 In the 1980s, Chandran was in the US and his legal career was taking off. He fell in love with a girl there and followed her to Japan—all in three days, he says. But in two months, she left him. He went back to the US, but his heart was in Japan—the most beautiful country he had seen. Japan is now home for him. “There are seven life contracts for each one of us,” explains Chandran. “She was the catalyst contract,” meaning a person will be in your life for a certain period and then leave. “But your life would have completely changed by then.”

On his return to Japan, he lived in a park, hungry and penniless. Later, he washed dishes in a restaurant. “I tried to commit suicide twice. At 37, all my beliefs were shattered and I constantly questioned God. This God was not helping me with food and shelter,” he says. Soon, he was teaching on weekends—how to come back in the oneness and to find the spirit within to change. Today, he conducts workshops around the world and has authored 11 books. “And, I have received four death threats from established religious and spiritual organisations in India,” he says, triumphantly.

What dishes would make up a menu that interprets the five stages of grief? Krittika Sharma, director of Death Over Dinner India, an initiative by RoundGlass Wellbeing, would know: beetroot carpaccio for denial, chicken tinga taco for anger, fettuccine for bargaining, bacon-wrapped dates for depression and vanilla panacotta for acceptance. This is not funeral food, but a medium to help digest a conversation around the inevitable.

But why talk about death over dinner? “The dinner table is the most forgiving place for a difficult conversation. The ritual of eating together creates warmth and connection and puts us in touch with our humanity,” says Sharma, an end-of-life care innovation expert. At these gatherings, participants learn to open up about a clean exit—from discussing their will to what kind of music to play at the funeral. The tables have included armed forces veterans, business owners, medical practitioners, authors, students, activists and artists.

“Death Over Dinner strives to disrupt the way we currently see and respond to death,” says Sharma. “And its impact lies in creating deep human connections through speaking about a subject with care from the lens of philosophy, agency, planning, communication and more.”

Rajagopal Raghunathan teaches marketing at the Indian School of Business and University of Texas at Austin. He is variously cited for his research on happiness, and is author of If you’re so smart, why aren’t you happy?. And, he has devised his MBA theory to achieve happiness in any career—M is for mastery, which is a feeling that you are seriously good at something; B is for belonging, which translates into sharing a deep connection with at least one human being; and A is for autonomy, which is doing things one wants to do.

Dr Saamdu Chetri, who teaches ‘Introduction to Gross National Happiness’ at the Rekhi Centre of Excellence for the Science of Happiness, IIT Kharagpur, says the measures used in happiness reports are limited. “Environment, which we are a part of, is not considered. This is one of the greatest factors for happiness,” he says. Chetri is the happiness monk of Bhutan, the happiest country in Asia—he is a founding member of the Gross National Happiness Centre in Bhutan, and was the centre’s executive director for six years. His advice to Indians: “There is a thin line between need and greed, make that line more pronounced.”

HAPPINESS AS AN INSTITUTION

The institutionalisation of ‘happiness’ is well under way in India. In May 2017, Madhya Pradesh—the first state in India to institute a happiness department—signed an MoU with IIT Kharagpur for developing a happiness index. This September, 1,500 surveyors will fan out in 52 districts to rate the happiness and well-being of residents on 30 parameters.

In Delhi, the government has introduced happiness therapy in six hospitals to mixed reviews. But the world is taking note of its happiness curriculum introduced in 1,000-plus government schools last year. Their videos on Twitter have piqued the interest of teachers from the US to Canada. Recently, Manu Gulati, an award-winning mentor teacher, collaborated with a Brooklyn-based physics teacher via Skype to train senior students there the art of mindfulness. “Most students in the world are stressed. This is a reality we share as teachers across boundaries,” she says.

Gulati cites the example of a class 8 student who asked her if it was possible to take the mindfulness classes home to practise on her parents as they fought all the time. Inspired by a class activity, the student made both her parents list out five qualities they like about each other. She plans to make her parents do mindful breathing next, says Gulati. The mindfulness exercises, she says, have made children more focused. Some feel less angry, while others can hear the low rumble of a train from afar. “That is mindful observation and listening,” says Gulati. “Is that not the essence of happiness—when you can connect with your inner self and the outside world?”