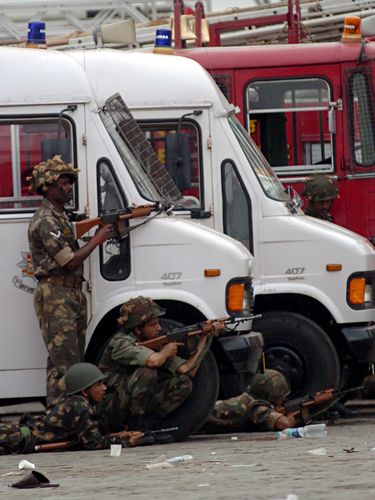 Mumbai, even India, is no longer safe, according to Sevantilal Parekh, 87. He lost his son, Sunil, and daughter-in-law, Reshma, in the terrorist attacks at the Oberoi hotel on November 26, 2008. The loss drove him to send his granddaughters, Anindita and Arundhati, to the United States. “They have no place in this country, where anyone can just ram into a hotel and go on a rampage, killing people,” said Parekh, who runs a shipping and logistics business. “Though we are affluent and can afford most luxuries, we would rather have our children work in another country, than be here and feel unsafe.”

Parekh says Mumbai is not equipped enough to handle another terrorist attack. His reaction is shared by many citizens, who live in constant anxiety.

Even a small, unattended cardboard box, left in a suburban train, triggers phone calls to the police helpline. At railway stations, one routinely hears announcements instructing passengers not to touch any unattended baggage. Today, fear lurks in the mind of the Mumbaikar—the lingering impact of the 26/11 attacks.

But, is our police force truly equipped to handle a terrorist attack, be it in terms of mindset, arms and ammunition or coordinated response? An additional director general of police in Maharashtra told THE WEEK that the 26/11 attacks shook the police establishment in Mumbai and the state to the core. Senior IPS officers like Hemant Karkare and Ashok Kamte were killed in the attacks, and the world saw the police force trying to fight AK-47 wielding terrorists with mere lathis. “Huge changes have taken place since then,” said the officer. “There is far greater awareness about terrorism because of constant training and capacity building. Anti-terrorism cells, with dedicated manpower, have been established in every police station.”

A crucial initiative that the Maharashtra government took in the aftermath of the attacks was to form Force One, a dedicated unit to combat terrorism, especially mass casualty attacks like 26/11. Founded in 2009, the unit was initially headed by officers like S. Jaganathan and Sadanand Date, both of whom had undergone training with GSG 9 (Grenzschutzgruppe 9), the special unit of the German Federal Police. “Our approach has been multi-pronged,” said Date, currently joint secretary in the department of justice in the Union law ministry. “The police force is now equipped with Quick Response Teams (QRTs) across cities in the state. These teams consist of men who are trained better and have better weapons.” There is one central QRT in each city, he said, and also regional or zonal QRTs. At the state level, there is Force One. “The jawans of Force One are far stronger and fitter than the average policeman,” said Date. “They are trained to handle specialised and superior weapons, equipment and situations, and the training lasts for a year. The training in all counterterrorism aspects is imparted by top experts at the national and international level.”

Maharashtra Director General of Police Dattatray Padsalgikar said that Force One is on par with the National Security Guard (NSG). “Force One and QRTs are fully prepared,” he told THE WEEK. “There is great coordination between them, and they conduct mock drills regularly. Local police will always be the first responders in any situation, but our preparedness is such that Force One and QRTs will take over within a span of a few minutes.”

At present, Force One is headed by Special Inspector General Sukhwinder Singh, a seasoned ATS hand. Force One has access to world-class equipment like CornerShot guns and monoculars. The teams have been trained by Israeli and German experts, and have been consistently winning national police commando competitions.

In the aftermath of the 26/11 attacks, the state government also felt the need to create a dedicated intelligence apparatus, leading to the founding of the Maharashtra Intelligence Academy (MIA), Pune. So far, three batches have passed out from the academy. “Each batch has 250 officers,” said a senior police officer. “We are getting a very good crop. Some of the officers are excellent. In addition, MIA also runs a number of other courses for serving policemen.”

Coastal security was also given high priority post the attacks, considering that the terrorists reached Mumbai by sea. The state has around 60 fast patrol boats. And, a chain of radars was commissioned along the entire coastline of India—32 radars; four in Maharashtra. The state has also activated the Sagar Rakshak Dal, a network of around 25,000 persons from coastal villages, for collecting human intelligence. Also, 19 new coastal police stations and 32 new coastal police posts have been established. “We will soon raise a marine commando force, too,” said a top police officer. 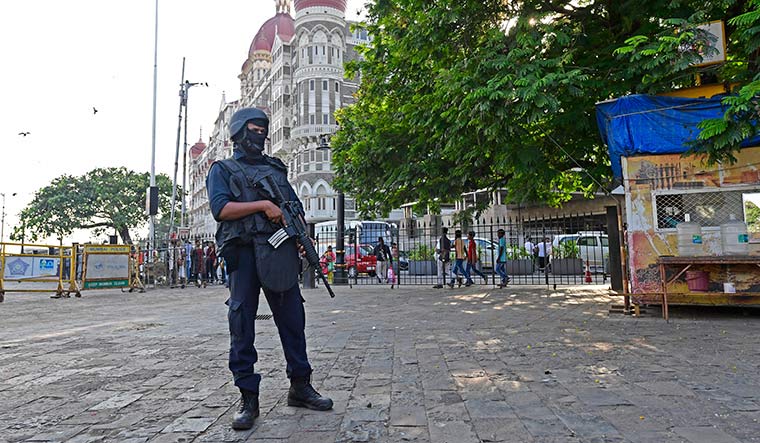 On guard: A Force One commando outside the Taj hotel.

Maharashtra’s Anti-Terrorism Squad (ATS) lost its chief in the 26/11 attacks. Karkare was martyred in the lane near Rang Bhavan along with additional commissioner of police Kamte and senior police inspector Vijay Salaskar. So, special efforts have been taken to make Maharashtra ATS one of the best in the country. “There has been a quantum leap in cyber technical data mining and data building. Our manpower strength also has gone up by almost 50 per cent,” said a senior police officer.

Moreover, the Mumbai Police has upgraded its weaponry, with policemen now carrying MP5 guns and Glock pistols and patrolling in armoured and amphibious vehicles. “At the police station level, the anti-terrorism cells will act as a nucleus of the anti-terrorism response,” said a high-ranking officer. “They have been trained accordingly, in terms of terrain, identifying suspicious movement and activity. Our intelligence gathering activity, too, has improved vastly.”

In an audit of counterterrorism capabilities, conducted recently by the NSG, Maharashtra, Andhra Pradesh and Telangana fared very well and were ranked excellent. The audit examined several criteria—manpower management, weaponry, mobility and equipment. “Maharashtra has been placed in the excellent category, but one must remember that security and preparedness is always a work in progress and it can never be complete,” said the officer. “We have come a long way since the 26/11 attacks. But, it is not foolproof yet. We have to succeed each time. But, the terrorists have to succeed only once. Hence, the importance of continuous training and capacity building.”