Rafale deal was to make squadrons leaner and meaner. Instead, it will add to worries 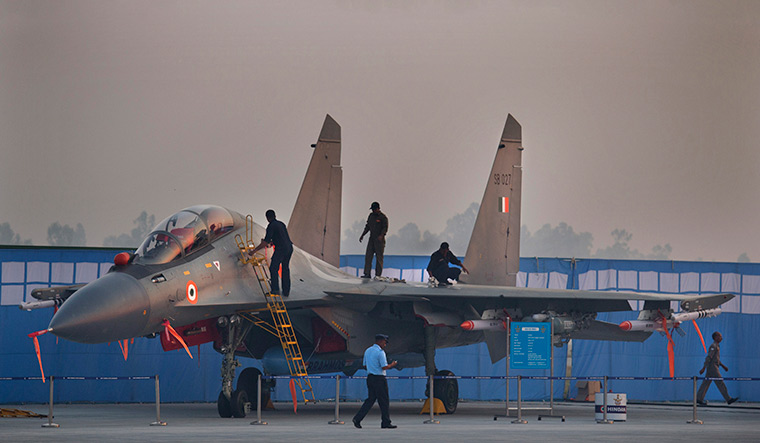 Grounded ambitions: A Sukhoi-30 MKI on display at an Air Force Day parade in Delhi. The Air Force, which plans to have fewer types of planes, wants Rafale to complement existing squadrons having the new Su-30s, and the older MiG-29s, Jaguars and Mirage-2000s | AP

As the dogfight over the Rafale fighter deal rages across the political skies, worry lines are appearing over the security horizons. China and Pakistan are “not sitting idle”, Air Chief Marshal B.S. Dhanoa recently told a gathering of strategists and aviation experts at the Centre for Air Power Studies in Delhi. “We do not have the numbers, with fighter squadrons down to 31 from the sanctioned 42,” said the Indian Air Force chief.

The irony is that even the government’s ‘emergency’ acquisition of 36 Rafales is not going to improve the situation. If the Air Force retires the rickety old MiG-27s and the older but refurbished MiG-21 Bisons, as had been planned, even 36 Rafales are not going to help boost the squadron strength. Rued Air Chief Marshal (retd) Anil Yashwant Tipnis, who had led the Air Force during the Kargil war: “We are fighting over the best price for a fighter jet. But we are not paying attention to what is happening in our neighbourhood—in China and Pakistan.”

Pakistan has only 20 fighter squadrons against India’s 31, but those 20 are packs of sinewy flying wolves—upgraded F-16s and brand-new, Chinese-designed JF-17s—against India’s rickety MiG-21s, obsolete MiG-27s, obsolescent Jaguars, a few agile MiG-29s, two squadrons of Mirage-2000s, and 200-odd new Sukhoi-30s. China has 1,700 fighters—including 800 fourth-generation fighters—against India’s 600. Now, with the Rafale deal getting mired in controversies, even the 42 squadrons appear to be a mirage.

Not that 42 would have been enough. “Even when we do have 42 squadrons, we will be below the combined numbers of two of our regional adversaries,” said Tipnis.

Said Air Marshal (retd) M. Matheswaran, who played a key role in bringing out the tender for procuring medium multi-role combat aircraft: “We have reached a precarious situation. There is no second winner in a war. The military has to be given the best available equipment.”

The proposal to have squadrons of multi-role combat planes began in the 1990s. The fleet looked impressive then—there were MiG-21 and Biz light multi-roles, MiG-23 fighters, MiG-25 spy planes, MiG-27 ground attacks, MiG-29 air superiority interceptors, Jaguar deep strikes, Mirage multi-roles and Su-30 heavy strikers coming in by the end of the decade. Of them, only the obsolete MiG-21s, Bizes, MiG-27s and Jaguars were available in several squadrons. The rest—MiG-23, MiG-29 and Mirage-2000—were in two or three squadrons, because they had been bought as emergency purchases (just as Rafale is now), or India had unwisely refused the vendor’s offer to grant manufacturing licence in India.

This, the chiefs realised, was leading to a logistics nightmare. “Each type needs its own support infrastructure—spares, tools, specialised engineers and streams of pilots,” explained an air marshal. “Every time we move a squadron from one theatre to another, the whole support structure would also have to move with it. And each station would have to have support structures of two or more types.” 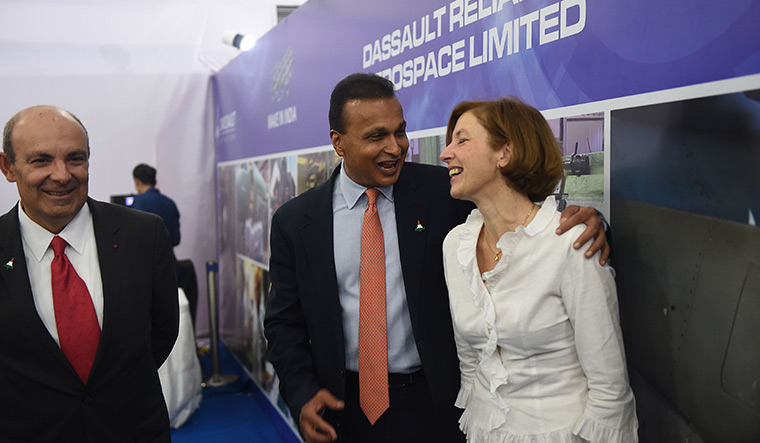 The chiefs also found that air forces across the world were reducing the types of planes they had, but adding more squadrons of multi-role planes. Realising that the Indian Air Force, too, needed to become lean and mean, they planned to gradually replace about 700 older planes with a single-type of multi-role planes. The multi-roles would be complemented by the Su-30s and squadrons of MiG-29s, Jaguars and Mirage-2000s.

In a formal request to the government in 2001, the Air Force, then led by Tipnis, asked for 126 multi-roles—18 to be bought off the shelf, a few more to be assembled at home, and the rest (more than 80) to be made in India after transfer of technology, with the option to build more.

The magic number of 126 was arrived at after a detailed study. But “we underestimated our procurement process,” said Tipnis. “We did not realise that it will take such a long time,” he said.

As the files got stuck in red tape, a worried Air Force proposed that the government buy 100 Mirage-2000s built in India. (The Air Force already had two squadrons of the aircraft, and they had served well in Kargil.) But, by the time the files moved, the French had closed down the Mirage plants.

For two years, the government sat on the proposal. Then, in 2004, it floated requests for information—officialese for asking global plane-makers if they had the multi-role plane that fits the bill. In 2007, the Congress-led United Progressive Alliance government floated a global tender for purchasing 126 twin-engine multi-roles.

By 2012, French company Dassault’s Rafale, which had the advantage of being logistically similar to Mirage-2000, won the race. Negotiations led to a deal at a base price of $10.2 billion (Rs 54,000 crore in 2012). Eighteen jets would be bought off the shelf, and the remaining 108 made by the public-sector Hindustan Aeronautics Ltd. Under an offset clause, Dassault would also have to invest half the total worth of the deal in India, sourcing parts and components from Indian companies. Then began the actual cost negotiations that led to the signing of an offset pact and a workshare agreement between HAL and Dassault in March 2014, weeks before the Lok Sabha elections.

As the new government came in, and negotiations towards the final deal began, Dassault began to have second thoughts. They refused to give guarantee for aircraft made by HAL. The deal got stuck, with defence minister Manohar Parrikar openly ruing its fate.

Then, in April 2015, Prime Minister Narendra Modi flew to Paris and announced that India would buy 36 Rafales off the shelf as a critical necessity. The announcement took everyone—including Parrikar, who was kept out of the delegation, and the HAL and Air Force brass—by surprise. For, even the previous day, foreign secretary S. Jaishankar had told the media: “In terms of Rafale, my understanding is that there are discussions under way between the French company, our ministry of defence [and] HAL. We do not mix up leadership-level visits with deep details of ongoing defence contracts.”

The stink rose sky-high when it was revealed that the mandatory offset contract would be given to Reliance Defence, a company that had been registered barely two weeks earlier. HAL, a Navratna company that has built 4,060 aircraft of various types, was out.

It took a while for the opposition to come to grips with the issue. When it did, former defence minister A.K. Antony launched the attack, quoting the Defence Procurement Procedures (DPP). He argued that only the Defence Acquisition Council—headed by the defence minister and comprising the three service chiefs, the coast guard chief, the defence secretary, secretary of defence finance, chief of Defence Research and Development Organisation, and secretary of defence production—was authorised to decide on the numbers. He also wondered how Modi had arrived at the decision to buy 36 fighters when the IAF had wanted 126.

The price became an issue later. The Congress found that if the cost agreed to by their government had worked out to an average of Rs 526 crore per plane, it would be Rs 1,670 crore under the new deal, leading to a total outgo of Rs 48,000 crore. It accused the Modi government of following “crony capitalism and compromise of national interests”.

The government struck back. Union Minister Ravi Shankar Prasad said that base price of each aircraft was €91.75 million now, whereas the UPA price was €100.85 million. That meant, Modi had got it 9 per cent cheaper. Later his colleague Arun Jaitley claimed a reduction of 20 per cent. They also claimed that Reliance Defence had been selected by Dassault, and not by India.

As the Congress demanded an inquiry by a joint parliamentary committee, and approached the Central Vigilance Commission to check how Reliance was selected, former French President Francois Hollande dropped a bombshell. “It was the Indian government that proposed this service group (Reliance Defence), and Dassault who negotiated with [Anil] Ambani,” said Hollande. “We did not have a choice. We took the interlocutor who was given to us.”

As per the current deal, France has to invest 30 per cent of the total order cost in India’s military aeronautics research, and 20 per cent in local production of components, most of which would go to Anil Ambani’s company. The opposition found that Reliance Defence did not own a factory when it was granted licence on February 22, 2016, and that it was incorporated on April 24 that year, 14 days after the deal was announced.

The government pressed the Air Force brass to defend the deal. After flying the first built-for-India Rafale in France in September, deputy chief Air Marshal R. Nambiar said the aircraft would “revolutionise airpower in our subcontinent” when inducted by 2022, and that the fighters came cheaper under the current deal.

Air Chief Marshal Dhanoa, too, defended the emergency buy, saying such buys had been made in the past. In 1983, when Pakistan inducted its first lot of F-16s, India bought two MiG-23MF squadrons off the shelf. Later, India also got two squadrons of Mirage-2000s and MiG-29s.

But, as one officer pointed out, the Air Force still regrets those deals. “Take the MiG-29 deal, struck during the Rajiv Gandhi era,” said a defence ministry official. “The Soviets had offered their technology to us, as a special gesture of friendship, even before they offered it to their Warsaw Pact allies. I still do not understand why we refused the offer and took just three squadrons off the shelf. Even the Soviets were surprised.”

MiG-29 remains the world’s finest air superiority interceptor, but neither HAL nor IAF’s engineers know anything about it. For major repairs, India has to call Russian engineers.

As politicians trade charges, the Air Force is deeply worried about the post-Rafale logistics nightmare. With too few Rafales in the fleet, the Air Force will be forced to retain the MiG-21, MiG-Biz, MiG-27 and Jaguar fleets. In short, if the original idea to go for Rafale was to reduce the aircraft types to just five (MiG-29, Mirage-2000, Rafale, Su-30MKI and Tejas), the Air Force will now be saddled with eight.

“We are beggars, and beggars can’t be choosers,” said Tipnis. “Having so many [types of] aircraft, you are asking for trouble.”

Agreed Air Marshal (retd) Manmohan Bahadur: “It does not make any logistic sense, as it increases load on logistics, maintenance and training. Also, it is very unfortunate that we have to depend on foreign players to fulfil our requirement. We have miserably failed to develop our indigenous industry.”