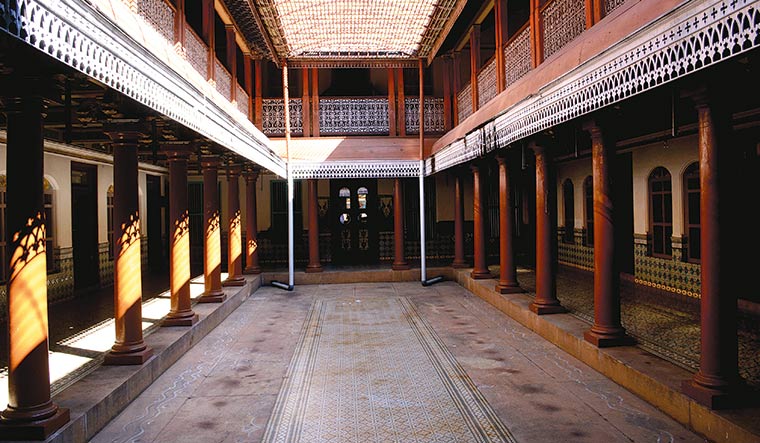 Housing heritage: An ancestral home of the Chettiyars.

“WE WERE LIKE fools who had discovered an incredible treasure,” said my host, an architect from France called Michel Adamant. “We went from village to village, discovering streets of decaying mansions with ornate facades and interiors, which left us to imagine the fascinating stories of their owners.”

I was in the small, obscure village of Kothamangalam, staying in a 108-year-old mansion called Saratha Vilas—the ancestral property of the wealthy merchant, Subramanya Chettiyar. As the morning light filtered through the stained-glass windows, it seemed like the entire world nestled in this sprawling mansion. There were pillars of Burmese teak, mirrors and chandeliers glistening with Belgian glass, tiles from Japan and the Netherlands, and Italian marble under my feet.

Kothamangalam is one of the 75 villages of the region of Chettinadu in Tamil Nadu. Chettinadu, famous for its cuisine, handicrafts and saris, and Athangudi handmade tiles, was once home to the affluent Nagarathar Chettiyar community, who were elite bankers and merchants. They traded in everything from spices to jewellery with southeast Asia, and eventually migrated to Malaysia, Myanmar, Vietnam and Sri Lanka in the 19th century. But, they left a piece of themselves in their ancestral homes, referred to as ‘naatukottai’, or regional forts, which displayed the wealth that they had brought in from the world. When Michel and his partner Bernard Dragan stumbled upon these old homes in various stages of ruin, they decided to convince one of the merchants to allow them to restore his house. And, that is how they breathed life into Saratha Vilas.

Built in the typical Chettinadu style—a fusion of colonial architecture with Dravidian aesthetics—I was just spellbound at its sheer opulence. The porch, guarded by columns of dark marble, opened into a succession of halls and courtyards. The central courtyard was lined with granite pillars while the verandah led into an expansive hall, where crystal chandeliers dangled from an ornate roof. 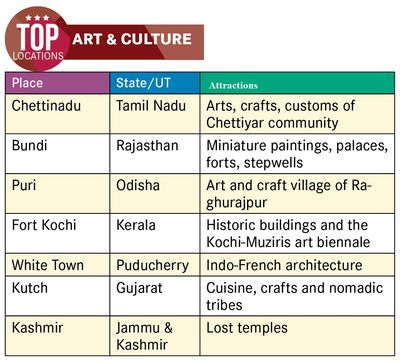 Chettinadu is a colourful mosaic of arts, crafts, jewellery, culture, architecture and food. Today, there are hardly any Chettiyars there, but their 30,000 or so homes, spread across the villages of Pallathur, Kottayur, Devakottai, Kothamangalam, Kanadukathan and the capital town of Karaikudi, stand as cultural symbols of their lives. While most of them are locked up, with only a caretaker to enjoy their splendour, a few like Saratha Vilas have been restored and opened to travellers as hotels.

We drove around, whizzing past temples, markets, handicraft centres, local tile manufacturing units, lush fields and brimming reservoirs. But it was the palatial mansions, standing majestic and proud despite being abandoned, that lured me. Statues of the goddess Lakshmi adorned the friezes of the mansions while an occasional one of Queen Victoria peeped from the wild shrubbery. Soldiers on horseback greeted me as terracotta horses stood tall.

I pottered around the villages on foot and every lane burst into colourful facades as some of these palaces occupied the entire stretch, starting at the beginning of an alley and ending in another.

Some of these homes inspire a curious mix of awe and melancholy. The clinking of bangles, the laughter of the women and the running of feet of children have been silenced by the passage of time. Memories framed as family portraits adorned the walls, and some had priceless treasures like old utensils or oil wick lamps. I was particularly impressed with a framed certificate from the British government acknowledging that the Chettiyars had funded a part of World War I in 1917.

The rooms and courtyards of the homes were like a maze connected with narrow passages. I was lost in the sheer number of store rooms. The caretakers told me that while they could house over a thousand people, they were used to store silver and copper utensils given as dowry during marriages.

We continued our road trip and stopped at Kanadukathan, where the Raja of Chettinadu stayed in his private palace. The temple bells were ringing as a woman pedalled past me in her bicycle. An edifice in white, the palace glittered in the light. We were not allowed inside but I headed to Kottayur to see another piece of architectural marvel—the Chettiyar Palace. The caretaker told me that it was soon to be converted into a museum.

We then drove to Athangudi, known for its locally manufactured tiles, and searched for Lakshmi House, a well-maintained palace where many films have been shot. A morose caretaker opened the door and I let out a gasp—the pillars, the flooring, the richly-decorated ceiling and the stained-glass windows were breathtaking.

And, finally, I headed to Karaikudi, where symbols of the past—an old wooden cupboard, a glittering Tanjore painting, English toys, porcelain figurines, brass lamps and silverware—converged in an antique market. Every piece of furniture or cutlery had a story behind it.

Our final halt was at an Ayyanar shrine where, amid giant terracotta elephants and horses, stood the guardian deity protecting these homes long abandoned by their owners. Standing there, I realised that Chettinadu was not just a region filled with crumbling old homes but also a treasure trove of stories that invoked a glorious past.