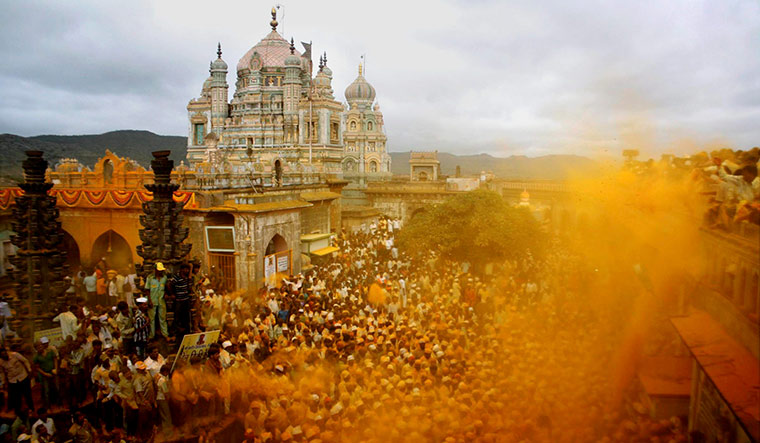 Binding hue: Devotees throw turmeric as an offering to Lord Khandoba at the Jejuri temple | PTI

KHANDOBA IS A GOD of many names—Maillara, Malhari, Mallari-Martanda, Mhalasakanta, Mailar, Mairala, Mallukhana and Bhairava. An important folk deity of the Deccan Plateau, he is worshipped in Maharashtra, Karnataka and Andhra Pradesh. According to writer R.C. Dhere, Khandoba was originally a folk deity—Maillara—from Karnataka who became Bhairava (an avatar of Shiva) in Maharashtra.

There are many legends woven around Khandoba. It is said Maillara was a valorous king who, accompanied by seven crore (Yelekota) soldiers, defeated the demons Mani-Malla. His devotees, therefore, chant ‘Yelkota Yelkota, Jaya Malhara’. He was also worshipped by the pastoral-nomadic tribes, and is a kula devata (ancestral god) of many families from different communities like Dhangar, Kolis, Sonar, Kunbi, Maratha, Deshastha and Karhade Brahmins. Muslim devotees call him ‘Mallukhana’, reportedly after a Pathan who married a Muslim woman.

Khandoba is typically depicted with four arms, one of which holds a ‘Bhandara-patra’ or a bowl of turmeric powder—the essence of the Bhandara festival that is held in Jejuri, 50km from Pune, Maharashtra. Every Somavati Amavasya (new moon that falls on a Monday), devotees of Khandoba gather at the magnificent Jejuri temple with tonnes of turmeric, smearing it on each other and throwing it all around amid energetic singing and dancing. The temple-town earned the ‘Sonyachi Jejuri’ (golden Jejuri) tag, thanks to this colourful celebration.

The Khandoba temple in Jejuri is the most significant among 12 other such temples that are located in Maharashtra and Karnataka. It is said Khandoba, accompanied by his two wives, Mhalasa and Banu, settled down in Jejuri thanks to the invitation of an ardent devotee. The temple is picturesque—a fort-like enclosure on the top of a conical hill rises above the town, and the steps leading from the town to the fort are of very unusual construction. These buildings and structures are said to be the result of the navas or vows made to Khandoba. Any devotee whose wish is fulfilled here has to build a step or erect a pillar or construct an arched gateway or sculpt an image of a bull, tiger or an elephant. Muslims who visit Jejuri beg ritually as form of repayment. This is called gada—Farsi for alms—of Mallukhana. While Khandoba is usually offered turmeric, belfruit leaves, onions and other vegetables, some devotees bring bharit-rodga (wheat flour buns) and even goat flesh as offerings. A few show their extreme devotion through Bagada—a ritual where a devotee is suspended from a shaft hooked to his back and swung around. Turmeric is then applied to his wounds.

The importance of turmeric is spelt out in the dhyanamantra of Khandoba in Mallarimahatmya, a Sanskrit text that was compiled between 1260 and 1540. It says: One should meditate upon the deity whose body is of golden colour; Mhalasa is sitting on his lap; whose horse is white; whose hand carries the sword; one who is admired and worshipped by gods and learned men; whose foot is on the head of the demon; whose arm is adorned with turmeric powder and who is carrying damaru (small drum) and is greatly admired among the devotees; who is surrounded by dogs; who is obtained easily by chanting of Omkara. This dhyanamantra emphasises the golden body of Khandoba, and it is ritualised as Bhandara, thereby indicating the importance of turmeric powder.

Saint Eknath has beautifully explained the term Bhandara in his poem on Murali. According to him, Bhandara means devotion, and through this ritual a devotee seeks viveka—pure discrimination. Bhandara is, thus, a symbol of bhava-bhakti—true love and devotion of the worshipper. The devotees think their life is fruitful just by participating in the Bhandara ritual. Newlyweds, whose kula devata is Khandoba, too, visit the Jejuri temple to celebrate their wedlock, as do those who wish for a child. Lord Khandoba is also the god of fertility.

At the Bhandara festival, devotees sing folk songs and narrate tales depicting the life of Khandoba and the quarrel between his two wives. According to folk literature, every devotee is equal at the feet of the god. They have a common identity, that of a devotee. The true devotee is engrossed in this ritual—he forgets all his pain, suffering and problems in his mundane life and seeks only divine bliss. Though many devotees may not understand the textual studies of philosophy, they follow the Vedanta philosophy by practising simple rituals like the Bhandara. They understand the oneness behind different gods and goddesses. All these people belonging to different communities are equal and one. They realise the spiritual unity of ‘Jiva’ (individual soul) and ‘Shiva’ (ultimate soul).

Moghe is assistant director at the postgraduate and research department of Bharatiya Vidya Bhavan, Mumbai.