A woman of few words

Though an introvert, Sridevi was considerate, and chose her friends with care 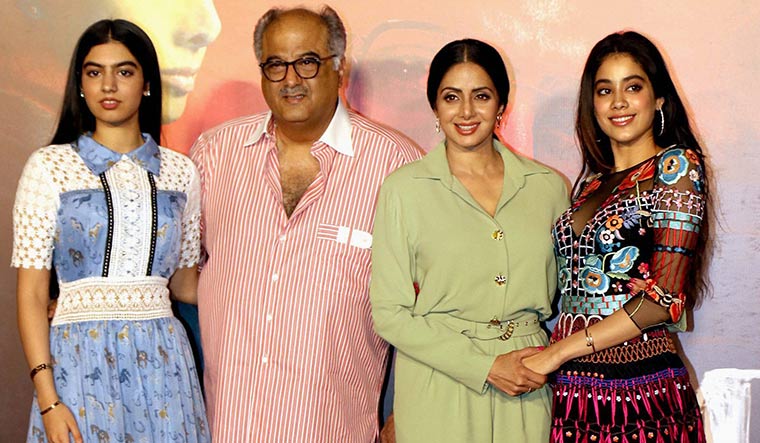 I remember approaching Sridevi for an interview at the launch of a fitness product in Delhi, in 2007, where she and her husband Boney Kapoor were special guests. She widened her big, bright eyes as she looked across the dinner table where Kapoor sat. Having taken a break from acting to raise her two daughters, Sridevi wasn’t seen very often; either on-screen or off it. Her last screen appearance at the time was on the TV show Malini Iyer (2004) and her last major film was Judaai (1997). She was known to be reserved and reticent—someone who spoke very little, who often directed queries to her mother, Rajeswari Yanger. On that day, too, it looked as if she was seeking permission from her husband.

But people who knew her say she was a very strong-willed woman who could take her own decisions. However, she depended a lot on her family— father, mother, sister and brother—in the early stages of her career and eventually on her husband.

“Boney spelt security in her life. He was her constant support. And, I think they learned to be inter-dependent,” says veteran film journalist Bhawana Somaaya. “From Boney’s side, it was an open declaration of love all the time. She was shy, never very articulate. But when he talked about her, she was always blushing. They had a very warm, loving equation.” Somaaya says Sridevi was not really seeking approval from Boney. “It was a kind of a recheck or a reconfirmation. They both knew what had to be done.”

Last year, a few days after the release of her last film Mom in July, I was talking to Boney for a feature on her 50 years in the film industry. He was ecstatic. He told me that her success and career were commendable, and that no other actor could have worked across so many languages in so many films. It was out of his love and respect for his wife that he released Mom, Sridevi’s 300th film, on the same day—July 7—that she had begun her film journey way back in 1967 as a child actor. 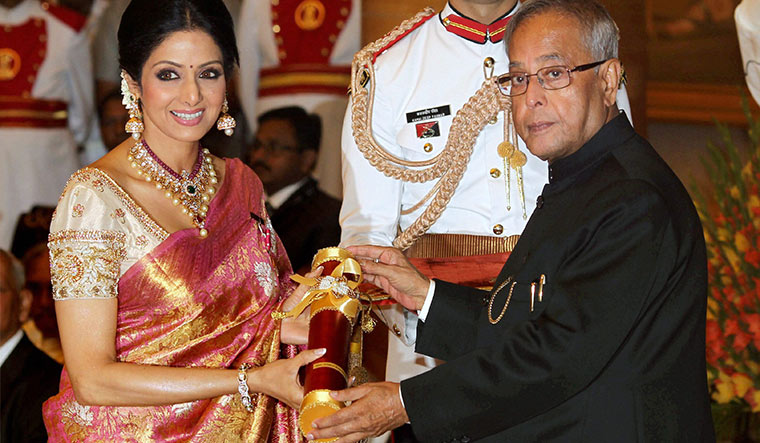 Sri and Padma Shri: Sridevi, receiving the Padma Shri from then president Pranab Mukherjee at the Rashtrapati Bhavan in 2013 | PTI

As Somaaya mentions, even after an open declaration from Boney’s side, their partnership didn’t come very easy. In what he called a love-letter to Sridevi, filmmaker Ram Gopal Varma wrote after her death about the difficult life the actor had. According to him, everyone close to her betrayed her. “In those days actors used to be only paid in mostly black money, and due to fear of tax raids her father used to trust friends and relatives, and every one of them betrayed her the moment her father died. Coupled with this, the ignorant mother made many wrong investments in litigated properties, and all those mistakes combined made her almost penniless by the time Boney came into her life,” he wrote. “He himself was in huge debts and all he could afford to give her was a shoulder to cry on.” Varma claimed that Boney’s mother saw her as a home-breaker and “publicly punched her in the stomach in a five-star hotel lobby for what she did to Boney’s first wife, Mona.”

But, her close friends say all that is ridiculous talk. Conspiracy theorists worked overtime about her death, gossips ‘revealed’ her private life, others spoke of cosmetic procedures and of slimming pills. “It pains to see someone who guarded her life so well and never reacted to any rumour being ridiculed in her death,” says one of her friends.

Pinky Reddy, daughter of film producer T. Subbarami Reddy (co-producer of Chandni) and a close friend of Sridevi over the past one decade, says that she has seen the fantastic relationship that the actor shared with her family. “She always used to talk about Boney’s children (from Mona). She used to show concern and talk very fondly about them. Even her mother-in-law was broken after losing Sridevi. Why would the mother-in-law feel sad if she was not a good daughter-in-law. She was always a nice person, a dignified woman who stood by her husband and family.”

Reddy considered Sridevi to be a perfect human being as her parents knew her since the time she was eight. As a child actor, she had come to their house while working in a movie with Telugu actor ANR (Akkineni Nageswara Rao). Reddy had spoken to her a day before she was to leave for Dubai, for her nephew Mohit Marwah’s wedding. “She wasn’t feeling very well that day. She had a little fever, but she had promised that after coming back she will be going to Hyderabad to meet my (newly-born) grandson,” says Reddy.

Born as Shree Amma Yanger Ayyapan in Sivakasi, Tamil Nadu on August 13, 1963, Sridevi started acting at age four, when her father, Ayyapan Yangar, got her a part in the Tamil film Thunaivan. Soon she was doing all four south Indian languages at the same time. She entered the Hindi film industry in 1979 in a lead role in the flop Solva Sawan, but later had successful films such as Sadma and Himmatwala (both in 1983). Her biggest challenge was not knowing Hindi, but she made up for it with hard work and did everything to make every role look perfect. She then taught herself Hindi, and by the time she did Mr. India (1987), she could do dubbing herself. A still from English Vinglish

“In her early days, I remember, she once had to get dressed as a village belle. They had put something on her head and then covered it with a sari. It was called singoda. She was so fascinated with the word, she asked, ‘Singoda! What kind of a word is that?’ But slowly, she got well-versed with the jokes and references; and started calling people jee and sahab instead of sar. She was very reserved and very polite. At the same time, she was very sharp. She learned things,” says Somaaya, who also vouches for the strong gut feeling she possessed. “She knew what a person was all about, and she knew whom she wanted to be friends with. She made her decisions from her heart.”

Make-up artist Mickey Contractor says it was great working with her and that she was always considerate and accommodating. “She would usually do her own make-up and she was good at it, but with me, she would allow me to do whatever I wanted. Moreover, she used to be curious and would ask about the colours I used,” he says.

Celebrity photographer Dabbo Ratnani first worked with her for Judaai. “She was extremely professional and courteous, very respectful towards every technician—whether it was a make-up person, hairdresser or a spotboy. It was a delight to work with her, especially because I worked with her since the start of my career. For a newcomer, she showed immense respect and waited for instructions. And that was a beautiful quality,” says Ratnani. “The transformation happened once she came in front of the camera—she became a livewire. ”

She would take time to open up. In his memoir Khullam Khulla, actor Rishi Kapoor recalls that during the entire shooting of Nagina (1986), Sreedevi and he exchanged just four lines besides the usual daily greetings. By the time they did Chandni together, the communication had improved. Actor Rohini Hattangadi, who worked with her in Chaalbaaz, doesn’t remember having a conversation with her ever. However, what she remembers is her punctuality and sincerity towards work. “She shot one song while she had fever, and she never missed a single beat,” says Hattangadi, also recalling how she would come forward to help the co-actors. “I had to wear a funny make-up for the song ‘Galti Ho Gayee’. I couldn’t do it all. She came to me to ask if she should try, and she gave me a perfect look.” 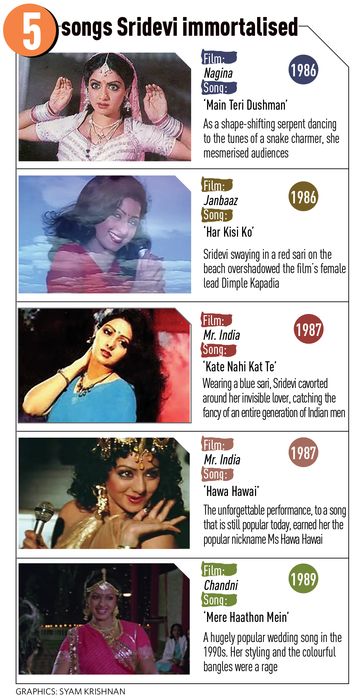 Her reserved nature, says director Satish Kaushik, was her personality. She spoke less and understood more. “But, she was emotional and understood everything. Twenty years after my son’s death, I had a daughter Vanshika (in 2012) and madam came with Boney to wish me well on her arrival. She was so happy. She was always a woman of few words, but her gestures spoke a lot. She had got me a painting with Gayatri Mantra inscribed on it. We can’t have another person like her,” says Kaushik.

Somaaya believes that there were rare, candid moments when she gave herself away. She recalls the time visiting Sridevi in Chennai when she lost her mother, in 1997. She introduced Somaaya to her aunt and then said something in Tamil. Curious, Somaaya asked her what were they talking about. She told her that she had often talked to her aunt about Somaaya—she being short and still looking attractive. “I never knew what she thought about me, but there were such moments when she opened up.”

In the last couple of months, everyone I spoke to said that she was excited about her elder daughter Janhvi’s debut film Dhadak (to release in July). “She beamed with pride when talking about her girls,” says Reddy, who thinks that she was more a passionate mother, than she was an actor.

Unfortunately, Sridevi will not be around to see Janhvi’s film. Hundreds of fans gathered to pay their respects to the iconic actor who was accorded state funeral. Now, with her gone, everyone is only worried about the family she has left behind—a family that completely relied on her.