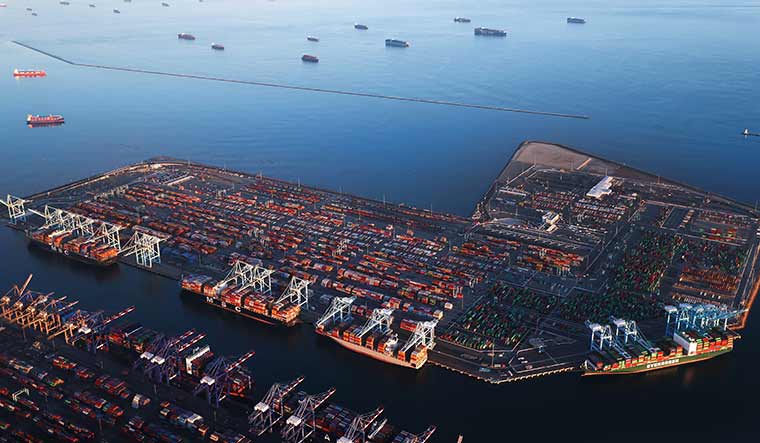 BESIDES MULLING over climate change and global corporate tax, and pow-wowing with the Pope, there was one last-minute addition to the agenda at the G20 Summit in Rome that Prime Minister Narendra Modi agreed to without batting an eyelid—a meeting hurriedly convened by US President Joe Biden. The agenda? Discuss supply chain challenges and other disruptions affecting global commerce.

“Supply chains are something that most citizens never think twice about until something goes wrong,” said Biden at the meet. “Now that we have seen how vulnerable these lines of global commerce can be, we cannot go back to business as usual.”

Chipped in Modi: “In the initial months of the pandemic, we all felt the shortage of raw materials to make essential medicines, health equipment and vaccines. Now that the world is gearing up for economic recovery, the supply problems of semiconductors and other commodities are coming in the way of healthy growth.”

The supply chain is the non-glamorous stepsister of global business; she toils away in the kitchen and the backyard, and nobody talks about her as long as the work gets done. But when this sis stops working and throws a fit, the world and its boardrooms and showrooms sit up and take note.

And, that is exactly what has happened now.

According to Ajay Nair, partner and leader (supply chain transformation), at the consultancy major PricewaterhouseCoopers (PwC), “Nobody anticipated the quick pick-up (in consumer demand), disruption on the supply side and volatility on the demand side. The impact on the global economy has been substantial.”

A confluence of factors led to this crisis. Lockdowns and restrictions saw both production and consumption plummeting. As many factories work on the ‘Just In Time’principle of stocking enough inventory (raw materials needed for production)—as stocking more for a longer period means both spending more money and requiring more storage space—they cut down on this as they expected the economic scenario to remain muted for a long time. But the pent-up demand and the ‘worst-is-behind-us-so-let-us-splurge’mentality after the second wave meant that shoppers came back with a vengeance much before businesses expected them to.

A big problem was that of container shortage. The global supply chain runs on the smooth movement of containers—primarily from Chinese ports—moving raw materials and finished goods back and forth. As Covid hit, these containers stopped moving, and when the demand suddenly recovered, there were not enough of them at the points where they were needed. This had a domino effect on the rest of the world. “A container from China to Mumbai earlier took 15 to 18 days; now it takes up to 50 days,”said Nitin Arora, managing director of MEO International Logistics. “While Indian ports are fast in turnaround, it is all part of a global chain and it doesn’t help that many containers are stuck in US ports due to delays in unloading because of lack of labour and equipment.”

It also did not help Indian businesses that after the Ladakh clashes, authorities withheld imports from China at Indian ports, and relented only after realising that they were only hurting Indian businesses. “Indian industrial production is totally dependent on consignments from China,”said Arora. “Finding an alternative is not possible in a hurry.”

The sudden spurt in demand also saw prices of commodities used in industrial production—steel, aluminium, copper and zinc—suddenly going up. Oil and gas prices have shot up 60 per cent in recent months to around $85 a barrel. Some analysts expect it to cross $100 next year. Retail prices of petrol and diesel have been hiked virtually on a daily basis in India, pushing up the price of almost everything.

Add to that one-off events like a global shortage in semiconductors, an energy crisis in China and the blocking of the Suez Canal back in the summer. These led to the birth of a perfect storm that has battered the world’s supply chain network.

While the situation in India is not as visible as in the US, where department store shelves go empty quite often these days, it is just as acute. A glitch in the coal supply chain saw India’s electricity supply flickering last month. Many states were forced to go in for power cuts. While officially the government maintains that all is well and coal supply has been buffered up, Union Power Minister R.K. Singh did admit that “it’s going to be touch-and-go”for the next few months.

It may be hard to believe there is a demand-supply mismatch when you see festive merchandise spilling over from shops to pavements and exuberant shoppers thronging marketplaces. Dig a bit deeper, and you find the fault lines just simmering under the surface.

Manufacturers are struggling with a shortage or delay in getting crucial raw materials. On the consumer side, people are struggling to cope with the rise in the prices of almost everything.

The mobile handset market declined 5 per cent in the past three months, and the dip could be as much as 30 per cent for some models. “During the September quarter, we saw supply constraints that were even more severe than those experienced during the June quarter. The global semiconductor shortage finally also took a toll on the end consumers,”said Tarun Pathak, research director at the consultancy Counterpoint.

The chip shortage saw carmaker Maruti Suzuki’s profits going down 65 per cent in the September quarter as it had to cut down production. The issue is the same for anything from cars to high-end watches to other premium products. “There has been a huge deluge of last-minute orders. It is an order cycle issue,” said Pushpa Bector, executive director, DLF Retail.

It could just get worse before it gets better. “For consumers, availability of products dependent on chips is going to continue to be a challenge,”said Nair. “Net price implication is going to go up. And for companies, this will put pressure on profitability.”

But, for India, it need not be as bad as other countries, if the government deftly manages electricity production and keeps the spiralling fuel costs under check. “These are unusual dynamics, but hopefully (by) next year, they should sort out,”said Chaba.

In the long run, it also depends on how well we take the lessons from this post-pandemic crisis, ranging from digitising supply chains to diversifying and developing alternatives to China. For example, Uttar Pradesh-based commodity trader-turned-FMCG company BL Agro. “We faced a shortage of raw materials we were importing, so are now procuring from the domestic market,” said its managing director Ashish Khandelwal. But, while Atmanirbhar Bharat and production-linked incentive (PLI) schemes are a good start, they are long-term measures. “Volatility is here to stay,”said Nair. “Disruptions will keep on happening—it could be climate change or another pandemic next time. That is the nature of the world and we need to be prepared.”

WHEN THE CHIPS ARE DOWN

Covid is just one of the many reasons for the shortage of semiconductors that has crippled industries.

WHY IS IT SO IMPORTANT?

Semiconductors can variably conduct electricity as per requirement. This makes them mighty useful in the amplification of signals, switching and energy conversion. In other words, they are required for anything from computers and phones to cars and data servers to work properly.

As demand fell when Covid hit, production went down. Then as work-from-home spawned a huge pent-up demand for laptops, phones and gaming devices, chipmakers struggled to meet orders on time.

A series of unfortunate events happened—a snowstorm caused blackouts that halted production at chip factories in Texas, while a fire swept through one in Japan.And a drought hit Taiwan, the world’s biggest hub for semiconductor manufacturing. In case you have not figured out where this is going by now, know this: chip making requires water; lots of it.

The electronics and auto industries are the worst affected. Car factories across the world have been forced to cut production. Many mobile phone models have disappeared from shops and e-commerce sites.

WHEN WILL THE SITUATION IMPROVE?

Not before the second half of next year, according to experts. India is said to be negotiating with Taiwan to set up a semiconductor plant, but that is a long-term plan and will be no solution to the current crisis.